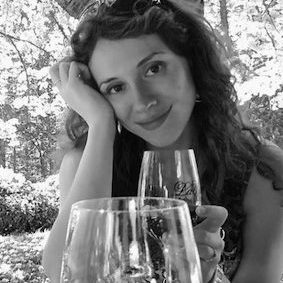 The women, all women, like forgotten pears
left on a windowsill to ripen, changed flesh:
blush to claret. In repeating cycles, I watched them
drift from the waters to the steam rooms
until they landed on the washing stations where
they spread their legs over plastic buckets, and with palms
cased in small blue mittens, they perused
one another, body by body, scrubbing, cleaning
dark places, I alone, would have missed.

Julia Kolchinsky Dasbach came to the United States as a Jewish refugee in 1993, from Dnepropetrovsk, Ukraine. She holds an MFA in Poetry from the University of Oregon and is a Ph.D. candidate in Comparative Literature at the University of Pennsylvania. She is the recipient of Lilith Magazine’s 2013 Charlotte A. Newberger Poetry Prize, and her work has appeared in or is forthcoming from Spoon River Poetry Review, Guernica, JMWW, Cirque, Split Lip, as well as various other journals. Julia is also the Poetry Editor for Construction Magazine.

Julia Kolchinsky Dasbach emigrated from Dnepropetrovsk, Ukraine as a Jewish refugee when she was six years old. She holds an MFA in Poetry from the University of Oregon and is a Ph.D. candidate in Comparative Literature at the University of Pennsylvania where her research focuses on contemporary American poetry related to the Holocaust. Her poems have appeared in Gulf Coast, TriQuarterly, The Missouri Review Online, and Narrative Magazine, among others. She has received fellowships from the Bread Loaf and TENT Conferences as well as the Auschwitz Jewish Center. Julia is the author of The Bear Who Ate the Stars, winner of Split Lip Magazine's 2014 Uppercut Chapbook Award. She is also Editor-in-Chief of Construction Magazine.