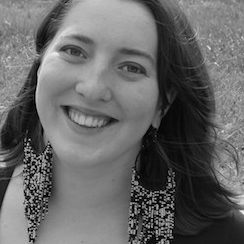 When the artist decided she wanted children
she took a cavern of her hip,
unraveled the muscle like cherry licorice
and carved scissors out of her spine,
snipping and tearing at the skin,
until the cells fell down just right.

When she was finished,
she unraveled a ragged chain of paper dolls—
These makeshift copies wobbling on two dimensional legs,
built on half-hearted reveries like thin bone stilts,
struggling to stand.

I asked her to share her dreams with me
But instead she shook her head
And as she did, the world began to shake
And I wondered, was it the tectonic plates
Or the cracks built into my ribs?

Emily Tuttle is pursuing her degree in English, with a minor in neuroscience, at the University of Maryland. She is involved with the creative and critical journals on campus and is an editorial assistant at Poet Lore. In 2015, she won an honorable mention for the Jimenez-Porter Literary Prize.

Emily Tuttle is a recent graduate of the University of Maryland, where she received her degree in English, with a minor in neuroscience and creative writing. She was editor in chief of the creative and critical journals on campus and editorial assistant at Poet Lore. She has been previously published with Doctor TJ Eckleburg Review, Blotterature, DistrictLit and Straylight Magazine, among others. She has won the Jimenez-Porter Literary Prize for poetry and was featured in the Sigma Tau Delta Rectangle.