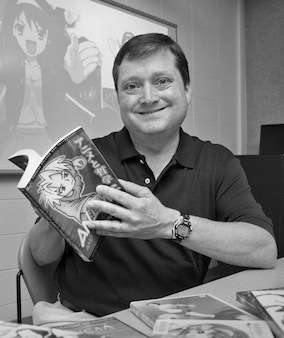 If he returned
tonight
to find me wearing lipstick
and fishnet stockings
at a midnight screening
of The Rocky Horror Picture Show,

preparing to throw rice
and sling toast
in the company of
misfits clad in black
with piercings
and bad skin,
and most of them
twenty years my junior,

would he then count me
among the goats
and tell me to depart?
and would his burning eye
send me scattering
for the nearest churchyard,
imploring the very ground
to swallow me up?

Or would he rather,
like the first time,
smile and,
long hair streaming,
rush the screen
to join his people
in the last Time Warp on earth?

MB Jones (1981-) Is a visual artist originally from western Massachusetts. While the style of his art is rooted in the American folk art tradition, his work also reflects his travels and past experiences living and working in art studios in the Netherlands, S. Korea, and most recently Laos. His work has been exhibited in commercial galleries and art fairs, yet he also embodies the underground DIY (do it yourself) movement in that he creates shows in unique places all over the world, exposing his art to new and unsuspecting audiences.