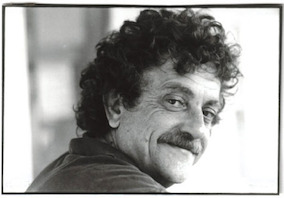 When Kurt Vonnegut died, the Alplaus Volunteer Fire Department in New York put their American flag at half staff and rang the fire bell used to honor fallen firefighting brothers. His name is still recorded in an old active fire-fighters roster.

Vonnegut, while a prisoner of war, experienced the Allied firebombing of the city of Dresden in February 1945. The Germans pressed Vonnegut and other POW laborers into cleaning up the carnage, an experience that inspired his famous Slaughterhouse-Five and spawned central themes for at least six other works as well.

Kurt Vonnegut’s inclusion in this column stems from his novel Mother Night—a novel about shades of gray in loyalty and treason. He paints realistic settings and characters and there are momentary distortions (for the characters and the reader) in perceptions of events and people that are not decomposed or explained. He was a cross-genre writer whose early identification with science fiction resulted in sometimes labeling him a genre writer until critical acclaim for Slaughter House Five forced reconsideration of earlier work.

Kurt Vonnegut was born in Indianapolis, Indiana to third-generation German-American parents from very successful families. Kurt, as a child of the Depression, saw the economic decline of his family and the emotional consequences of the surrender of a lifestyle that included servants and family vacations by steamer to Europe.

Vonnegut entered Cornell University, majoring in chemistry and working in a commercial operation as the Assistant Managing Editor and Associate Editor of The Cornell Daily Sun. Vonnegut reversed his public anti-war stance after Pearl Harbor, dropped out of Cornell, and enlisted in the United States Army.

Vonnegut prepared for duty as a member of a reconnaissance squad. He went home on leave for Mother’s Day weekend in 1944 to surprise his family, and his mother, struggling to adjust to middle class life, chose that Mothers’ Day to commit suicide. Mothers in his fiction tend to be morbid, crazy or suicidal according to his biographer and self-destruction is present in most of his works in some way according to well-established critics.

Kurt fought in the Battle of the Bulge and was captured performing his scouting duties. His internment from December 1944 to May 1945 as a POW included another major formative experience alluded to above that colored his writing for more than fifty years.

After returning from World War II, Kurt Vonnegut married his high school sweetheart, Jane Marie Cox, and wrote about their courtship in several short stories. He entered the University of Chicago to study anthropology and began to write for several magazines in the early 1950s. His first science fiction story was “Report on the Barnhouse Effect” for Collier’s Weekly.

In the 1960s the Vonneguts lived in Barnstable, Massachusetts, where Kurt worked at a Saab dealership and tried to concentrate on his fiction. They had three children of their own and they adopted and raised three of his sister’s children after they lost their parents. He accepted a teaching position in the Iowa Writing Workshop at the point where he was about to give up writing in order to support his large family. The Vonneguts separated in 1970 and later divorced. Vonnegut and his second wife, photographer Jill Krementz, adopted and raised a child together.

According to Vonnegut in Bagombo Snuff Box, the University of Chicago, having rejected his first thesis, accepted his novel Cat’s Cradle as his thesis and awarded him an M.A. in 1971.

Themes of strife, brutality, and spiritual loss developed in his first two novels, Player Piano and The Sirens of Titan, continue into Mother Night. In an interview at the University of Iowa after his arrival, he said this exploration of inner space was more personally disturbing to him because of his war experience combined with his German heritage.

The fictive world of Mother Night is the mind of Howard W. Campbell, Jr., an American who is a successful writer and playwright in Germany before World War II, who, as the war approaches, rejects the notion he must take a moral stand. However, since a moral response is required once war arrived, Campbell finds a solution (offered by American intelligence services before the war started) in the dual allegiances required for espionage.

In unwinding this confessional story, Vonnegut provides us with a spy story, a revenge drama, a romance, and parodies of several other forms. The overall impact suggests an infinite number of connections of persons within a person and places within places as seen in the techniques of Jorge Luis Borges. The reader concludes that these convergences blur the edges between life and art—precisely the dilemma and the indictment of Campbell during and after the war. To be any more explicit here would be to ruin a perfectly good read about the relationship between what we imagine ourselves to be and what we become.

A FEW OF VONNGUT’S MANY NOTABLE QUOTES

“I have been a soreheaded occupant of a file drawer labeled ‘science fiction’ . . . and I would like out, particularly since so many serious critics regularly mistake the drawer for a urinal.”

“We must be careful about what we pretend to be.”

Charles Shields. And So It Goes:  Kurt Vonnegut: A Life. New York:  Henry Holt and Company, 2011.