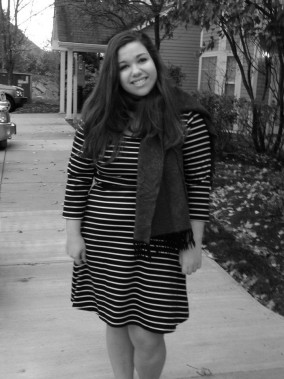 I hate him and his cool, hard look; his neat bookshelf; his smell like laundry detergent and almost burnt coffee. I hate his penmanship and that he believes in God. I hate that my mother loves him.

We meet for breakfast at the same place we’ve been going for three years now, only it’s switched management and so my eggs are runny and all our favorite waitresses are gone. He’s talking about Work, which is really just a cashier job over at the health food store, and also His Mother’s Health, because she is dying, and also the Nature of Our Relationship because he sees the far far look in my eye and smells deceit on my clothes. I’m hiding behind a chipped mug of too-sweet coffee, thinking about popping the emergency Xanny tucked behind the Lord’s Prayer in my wallet—

“Baby, are you getting high again?”

“Right now?” I ask, and I hate him for calling me baby and for saying “getting high” like I’m shooting up with dirty needles. I hate him and the sticky linoleum and the too-young waitress who snaps her gum and doesn’t know my order by heart.

“You know. Have you been smoking pot?” I’ll always be his favorite charity case.

“I mean, if you’re asking if I can get you a deal, I definitely know a guy.”

He looks so hurt that I’m almost tempted towards the far-fetched promise of an even farther-fetched sobriety; but it’s only because he looks like a younger version of himself. He was big eyes and poet’s words, cheeseburgers at 3 AM and oral at noon and dancing around his room with the stereo blasted.

But now he’s folded hands and a wrinkled nose and he can’t even kiss me; like poisoned lungs mean poisoned lips and like I am a lost cause and a heartbreak. And he’s saying things like, “We can get you help—” like I’m some junkie worthy of this sharp pity—and I hate him, I hate him, I hate his tilted up chin and his dumb poems that were never about me.

We leave a shitty tip and I roll a blunt on my dashboard and he writes on a park bench about some girl from high school he never got to fuck. He goes to work that night at the health food store, and I dream about his meeting a scrubbed-clean girl who’s never touched a drink, who tilts her head back when she laughs and has a family dinner every Sunday night.

I call him and hang up on the first ring, and when I visit his dying mother the next morning I am stoned and secretive, smiling too wide, snapping my gum.

This is Jessica Baker’s first published piece. She is a Creative Writing student at Wheaton College, MA, and enjoys glass unicorns, peanut butter cups, and Kurt Vonnegut. Her mother calls her Fred. Find her at justyouraveragebookslut.tumblr.com.

Jessica Baker is a college student and crew member at Chipotle Mexican Grille. She divides her time equally between fantasizing about Kurt Vonnegut and eating guacamole. She likes smoothies, the internet, and glass unicorns. Her mother calls her Fred.