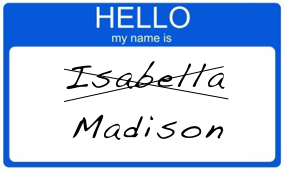 “What’s in a name?” Juliet asked Romeo, as the star-crossed lovers tried, and failed, to distance themselves from warring families.

If Romeo and Juliet―two names irrevocably entwined―are today enjoying a rebirth of popularity, what does that say about previous years when they were decidedly unpopular? Were Americans oddly unromantic during the 1980s and 90s? Have we rediscovered Shakespeare? What’s going on?

The indelible association of names and romance may be the culprit. In 2010, the most popular names among American babies were Jacob and Isabella. Pop culture mavens will recognize these names as the werewolf Jacob and angst-ridden Isabella Swan from the Twilight books and serial movies. In the Twilight story, Bella falls for the irrepressibly repressed vampire, Edward Cullen. Absent from the top 1000 list for 94 years, Cullen reappeared at #792 one year after the publication of Twilight and rose to #412 in 2010.

So, has it come to this: Are Americans actually naming their offspring after werewolves, vampires, and the delectable girl who must choose between them?

It’s tempting to say so, but there is more going on. Consider the meteoric rise of Isabella to #1 in 2010.  Her rise began well before Twilight captured the popular imagination. Isabella disappeared from the top 1000 list altogether from 1949 to 1989, reappeared at #896 in 1990, rose swiftly to #45 in 2000, and ranked #1 nationally in 2009 and 2010. Isabella is a name we have come to like immensely. It is a regal, breathily romantic name. It is also Spanish. Thus, it is no surprise that Isabella topped the 2010 charts in states with the greatest Hispanic populations—California, Texas, Florida, New York and Colorado.

The American name game has become a volatile stew as trendy, fanciful, freshly minted and spelling-tweaked names vie for popularity.  In the process, we are abandoning our traditional namesakes, those familiar and revered first names that once connected children with family members and the narratives of generations. This is especially true of female names. Of the 50 most popular names for girls in 1950, only one (Elizabeth) appeared in the top 50 roster in 2010.

Consider the advent of Madison, a name destined to bust glass ceilings if ever there was one. In 2010, Madison was the most popular name given to baby girls in the District of Columbia. The nation’s capitol and nearby states of Maryland, Virginia and West Virginia went bonkers for Madison during the decade of 2001-2010 when a combined total of 11,249 girls were named Madison. A greater Beltway phenomenon is at hand. Still, we must wait for these all these Madisons to grow up. The full onslaught of their impact as lobbyists will not be felt until 2030, when capitol staffers will answer every other phone call with, “Yeah, Maddie, whaddaya want?”

But how did Madison suddenly become in vogue? Credit Hollywood. In 1984, Daryl Hannah played a mermaid in and out of water in the film Splash. Seeing a street sign for Madison Avenue, she named herself “Madison.” A smitten landlubber played by Tom Hanks protested. “But Madison isn’t a name!” he groaned.

It is now.  So are a lot of other names of curious and dubious origins. Jayden, a newly minted unisex name, ranked #851 in 1994. In 2011, it was the fourth most popular name for boys in America. Why Jayden? The name has no etymology. People just like it.

During the past forty years, Americans have adopted or invented scores of new names for their children. Among the top fifty names for boys in 2012 were Liam, Jayden, Aiden, Logan, Lucas, Dylan, Caleb and Landon. But no Tom, Dick and Harry. Nor, in the girls’ column, is there a Faith, Hope or Charity. Instead, we have Addison, Allison, Leah, Nevaeh (“heaven” spelled backwards), Brooklyn, Kaylee, Layla, Khloe (oy, another Kardashian), Zoe and Zoey.

The mayhem does not end there. The SSA annually compares the popularity of names from one year to the next. Here, the visitor encounters a free fire zone of names angling for status, yearning to breathe free, or dying on the vine. Among male names gaining ground from 2009 to 2010 were Brycen, Colten, Kellen, Braylen, Landen, Ayden, Braiden, Zayden, Jaden, Kaiden and Kayden.  A variety of national OCD is at work. Like blindfolded simians in a savage experiment, scores of parents are affixing their last two Scrabble tiles, E and N, onto anything at all to contrive chic names.

Meanwhile, Bentley leapt from #515 in 2009 to #75 in 2012. His surge occurred two years after the onset of the 2008 recession. What are we to make of this? Do parents imagine their upward-bound son cruising in style after a day of heavy trading at J. P. Morgan? Or do they foresee a life of diminished expectations for their child—a future chauffeur, perhaps—as in, “Bentley, go get the car.”

If the cachet of given names is today an American obsession, it was not always so. The business of naming children in America was once a foregone conclusion. Boys were named John. Girls were named Mary. The heyday of John and Mary lasted for decades. John ranked #1 for 44 consecutive years, from 1880 to 1923.  Mary’s grip on first place lasted even longer. Mary was the most popular name for girls from 1880 to 1946. Linda overtook Mary for the next six years. Mary again ruled the roost from 1953 through 1961.  Thereafter, first place was attained, in succession, by Lisa, Jennifer, Jessica, the upstart Ashley, and Jessica again. In 1996, Emily assumed the rank of #1.

The rise and fall of Emily’s popularity is instructive. Americans have always liked the name Emily. Her name long enjoyed the association of namesakes Emily Brontë, author of Wuthering Heights, and poet Emily Dickinson. From 1911 to 2010, some 738,856 American girls were named Emily. It was not until the 1960s, however, that Emily gained real traction in the popularity sweepstakes.

Languishing at #269 in 1963, Emily got a boost from the movies in 1964. The film was a WWII serio-comic romance called The Americanization of Emily. It starred Julie Andrews in her first dramatic role. She was paired with James Garner. Together, they generated on-screen chemistry that surprised critics and delighted movie-goers. When Julie Andrews popped the crucial question―“Are you going to get rid of me when I’m not fun anymore?”―to James Garner’s serial womanizer, she represented the qualities that make the name Emily so appealing. She was intelligent, upright and nimble with men.  A Johnny Mercer lyric to the movie’s theme song reinforced the idea that this woman was a keeper.

Mercer’s dreamy jazz waltz for Emily was later recorded by Tony Bennett, Frank Sinatra, Anita O’Day and Barbra Streisand—an all-star line-up all singing the praises of Emily. In 1966, Simon and Garfunkel crafted another Emily tribute. For Emily, Whenever I May Find Her featured a haunting vocal by Art Garfunkel. It was often introduced by Paul Simon as a song “not about an imaginary girl Emily, but about a belief.” Simon’s belief caught on. Years later, among comments posted on a YouTube offering of Simon’s ballad, was this testimonial: “I was named after this song.”

One year after the release of The Americanization of Emily, Emily jumped 29 spots in the rank of popular names of American girls. How much of that bump can be attributed to the film, or the Emily songbook, is open to conjecture. What is certain is that the film presented a woman of impeccable character. It is little wonder, then, that American parents embraced Emily as a splendid name for a daughter. The name was also phonetically lovely. “It has a matchless flow to it, both spry and gentle,” writes one commentator, herself an Emily.

Emily had a good run. For twelve years, she remained atop the SSA registry of popular names. In 2008, however, Emma nudged her from first place.

In part, the demise of Emily’s popularity stemmed from the inevitable exhaustion of cachet, always an ephemeral commodity.  The primary cause of Emily’s decline, however, was a new cultural imperative born in the 1960s. It championed individualism and diversity, the idea that American children desperately needed and deserved unique identities, and so must be given unique names. To serve the cause of diversity, altogether new names had to be coined for legions of precious newborn children. Hence we are in a rat race. Parents require an ever-expanding roster of candidate names to choose from. Or they must furiously invent them. The American name game is in high gear.

The astonishing (and counter-intuitive) trend in names today is that the most popular names are less popular than ever. Laura Wattenberg, author of The Baby Name Wizard and creator of two Web sites that track baby names, reported in 2010 that “half a century ago, 39 percent of all babies born in this country were given a name in the top 25 [rank].” Today, she says that number has fallen to 16 percent.  Meanwhile, the least popular names, those that rank 999 or 1000, number in the hundreds of births, whereas they barely registered 8 or 9 a century ago. The national popularity chart of names, once a curve, has flatlined.

Admittedly, the crowded menu of new names includes many that are fun or intriguing. It’s not at all hard to imagine a supermodel named Yaretzi stalking the Kremlin wearing only her Opium perfume. No doubt, future frat boys named Parsifal, Ham and Yorick will tell ribald tales to their children some day. We can do this, right?

In fact, we are doing it. The question is, should we? Laura Wattenberg says American parents are captives of “lockstep individualism.” She notes that over a third of all new names for boys end in the letter N. Our names, she says, travel in “phonetic packs.” She writes: “In our rush to bless our children with uniqueness, we’ve created a generation that sounds more alike than ever.”

Our taste in names is equally fickle and self-correcting. As fast as new names appear nowadays, others fall out of favor. The risk is that in a rush to be different, we lose touch with the enduring meaning of names. Names born of celebrity branding, conceit or sheer willfulness may satisfy our hankering to be sovereign. But will they fragment our identity?  If our new names are fatally disconnected from families, places, experiences and the whole damn national gestalt, we may someday wish to reclaim our old names as a birthright. We may ask, too, in years to come, when we meet a girl named Caitlin, or Kaitlyn, or Caitlyn, or Katelynn, or Kaitlin, or Kaitlynn, what were her parents thinking? Then again, our restless obsession with names offers up endless delights.  It was neat when Riley became a name for girls, too. Hey, Riley is a cool name for a girl.

Rory Flynn is a freelance writer and researcher in Hawaii. His career includes a long stint with the Department of Veterans Affairs Vet Center program and several terms as a legislative analyst for the Hawaii County Council. He is currently writing a book titled The Kohala Ditch Project, the story of one of America’s most astonishing and enduring aqueducts.