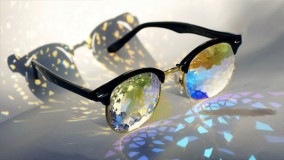 Like many writers, I often find myself wanting to tell stories of usual encounters or new perspectives. While much of my fiction is the product of my imagination, my flash fiction story, Macroscopic Sacred Puzzles, is largely autobiographical. During the first weeks of my husband’s graduate school career, he was prescribed his first pair of glasses. It was an intensely unique experience for the both of us as he adjusted to his “perfect” vision.

Initially, I felt I was having a fresh sensory experience of the world via his remarks and discoveries, but soon the novelty of his observations grew somewhat annoying. A few of his comments were critical. Suddenly, he could see flaws. One of the earlier drafts of the Macroscopic Sacred Puzzles included a statement he’d made regarding subtle differences he noted in my face now that his vision was so sharp. The comment was innocuous but struck me as tonally disruptive; so, I removed the line, but I sometimes wonder if the story would have grown into something more emotionally charged had it stayed.

With each revision, I realized this was both a story about the large-scale world we interact with, as well as the almost inscrutable, microscopic details that comprise a snapshot. Throughout a normal day, people can either be dwarfed by their surroundings or enlarged into masters. My aim was to juxtapose that duplicity. On a highway, one car is insignificant and part of a sea of traffic. Conversely, when the driver of that car is home alone reading a piece of mail or interacting with a pet, she assumes a much more prominent role. In the narrative, I focused on how vision affects our perception and our place in the environment. The title of my flash fiction, I hope, hints at the various frameworks through which we navigate our bodies and draw our conclusions.

Ironically, this essay detailing my writing process that resulted in Macroscopic Sacred Puzzles is almost twice or three times as long as the story itself. I had a writing professor tell me once that my shortest stories work on an implicit level: I don’t have to say much, because many of the words I choose tend to convey multiple meanings. Since hearing this compliment, concise multiplicity has become a goal of mine.

I love that my story about glasses is being featured in The Doctor T.J. Eckleburg Review. The symbol of the bespectacled eyes is such a wonderfully loaded image. The eyes can see or overlook everything, depending on the viewer.