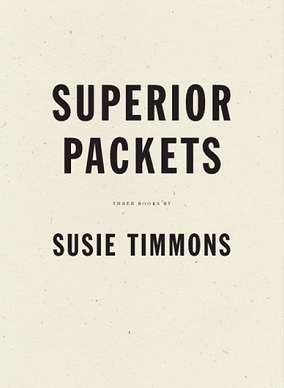 35 years worth of poems by Susie Timmons, long heralded by her peers in New York such as Ted Berrigan, Alice Notley, and Eileen Myles, previously only available in small-run editions. Her poems are witty, smart, and quick, with a pleasantly surprising clarity and freshness.

“Her titles alone should give readers a sense of her poetics: low-key yet brainy, spunky yet depressive, post-second-wave New York School yet retaining that group’s hallmark East Village sensibility.” — Publishers Weekly“Superior Packets is a joy to read—lucid, celebratory, enchanting, unpretentious, overabundant, sieve-like, epiphanic, bloodhounding, and imbued with a quick-witted voice that embodies and celebrates the fundamental universals we lose in the dailiness of our lives: how thoughts and feelings and experiences form, how they move, and what they might look like in their primordial state, pre-speech, when they’re still what we mean to say and not what we think people want to hear.” — Anelyse Gelman

Susie Timmons was born in Chicago and has lived in New York most of her life. Timmons first book of poetry, Locked from the Outside, was the inaugural winner of the Ted Berrigan Award, judged by Alice Notley, Robert Creeley, Anselm Hollo, and Ron Padgett. Her book, Superior Packets, is forthcoming from Wave Books in the spring of 2015.