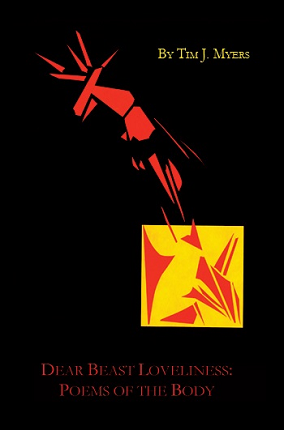 From the mysteries of the sleeping body to the self-inflicted ravages of anorexia–from the twisting of a self when genes malfunction to the dark/bright power of sexual desire–from the astonishing process by which one body grows inside another to the equally astonishing process whereby the life of a body is snuffed out–we find our very humanity, its best and its worst, its most restricted and most transcendent, linked inexorably to the bodies we inhabit. What do alcoholics dream of? What is the relationship between body and dance? How does war inform our understanding of our physical selves? How do we react to disease or tragic fatal accidents? How do we understand the bodies of those we desire and/or love?

Underlying it all is one of the great paradoxes of the body: the way we so utterly identify ourselves with it and, simultaneously, beyond it.

“If you haven’t yet felt the joy of reading the poetry of Tim Myers, Dear Beast is a wonderful place to start. Openhearted and alert to the world around him, ever connecting wisdom and wit, his poems are stirring, entertaining, and even edifying. Really first rate in every way.”
–Ron Hansen, author of Mariette in Ecstasy and She Loves Me Not

“These meditations on the blessed carcass move us from bed nest to city street, from cellular self to divine sensation. How do we humans recognize who we are in Vietnam, in Rwanda, on a back porch where rain softly falls? Through the body, says Myers, through the body.”
–Rebekah Bloyd, author of Seabook

“There’s an extraordinary exuberance in Tim Myers’ voice as he celebrates the human body in these beautiful poems. From the cellular level to the divine, he sustains a tone of awe that utterly delights. Sleeping, shaving, walking: nothing the body does is mundane in Myers’ world. And his poems of lovemaking with his wife soar with passion and playfulness. Although Myers doesn’t ignore the body’s betrayals—illness, disability, death—his perception of the body returns again and again to wonder and gratitude, even the skeleton in all of us rejoicing, “I am the hidden, white, and dancing tree.”
–Claudia Monpere McIsaac, poet and writer

In his first book-length collection of poetry, John Olivares Espinoza defies the common portrayal of the typical Southern Californian and depicts a much harsher yet deeply touching reality for one working-class family as it struggles to make ends meet and save for the children’s education. The Date Fruit Elegies elegantly yet accessibly chronicles the family’s experience in Southern California’s Coachella Valley. Dignified and never sentimental, the poems create vivid imagery that does not soon fade from the reader’s mind.

Every Riven Thing is Christian Wiman’s first collection in seven years, and rarely has a book of poetry so borne the stamp of necessity. Whether in stark, haiku-like descriptions of a cancer ward, surrealistic depictions of a social order coming apart, or fluent, defiant outpourings of praise, Wiman pushes his language and forms until they break open, revealing startling new truths within. The poems are joyful and sorrowful at the same time, abrasive and beautiful, densely physical and credibly mystical. They attest to the human hunger to feel existence, even at its most harrowing, and the power of art to make our most intense experiences not only apprehensible but transfiguring.

Seabook by Rebekah Bloyd. In this volume of Caribbean-centered poetry, a lyrical voice traverses the island’s physiognomy as it is disseminated throughout geographical places, historical events, works of art and literature, daily life and mother tongue; the voice re-configures a new sense of self as she incorporates the experiences gained from her explorations.

1. Human moral and spiritual attitudes toward the body have varied widely, from one extreme (the body is evil) to another (the body is sacred). How do you feel about the body in terms of its “goodness” or moral “badness” or its spiritual qualities, and why? And how do you think your feelings might affect your own behavior, life choices, etc.?

2. For human beings, the very existence of the body seems inevitably to call up the idea of “spirit.” Explain how body and spirit interact in the following poems, and if you agree with the ideas presented:

“Anorexia”
“For Nick”
“Traitor”
“To Be Read Out in Church”

3. The poem “A Girl” doesn’t say anything directly about human life, but it implies a great deal. What might the poem be suggesting?

5. “A Day in Summer” could be seen as simply an expression of pleasure. Using lines from the poem, explain how it can also be seen as philosophical, even as part of someone’s entire worldview.

Tim J. Myers is a writer, songwriter, storyteller, and senior lecturer at Santa Clara University in Silicon Valley. His children’s books–11 out and four on the way–have won recognition from the New York Times, Kirkus, NPR, the Smithsonian, Nickelodeon, and others. He’s published over 120 poems, won a first prize in a poetry contest judged by John Updike, has two books of adult poetry out, won a major prize in science fiction, has been nominated for two Pushcart Prizes, and has published much other fiction and non-fiction for children, adolescents, and adults. His Glad to Be Dad: A Call to Fatherhood won the inaugural Ben Franklin Digital Award from the Independent Book Publishers Association, was featured on the Parents Magazine website, quoted on Disney’s BabyZone, and made #5 on Amazon’s “Hot New Releases in Fatherhood”–he won the West Coast Songwriters Saratoga Chapter Song of the Year award–and he won the 2012 Society of Children’s Writers and Illustrators Magazine Merit Award for Fiction. And he can whistle and hum at the same time.