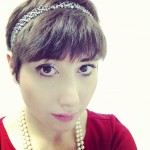 Joanna C. Valente is a human who lives in Brooklyn, New York. She is the author of Sirs & Madams, forthcoming from Aldrich Press in late 2014. She is also the Founding & Chief Editor of Yes Poetry, as well as a columnist for Luna Luna Magazine. In her spare time, she is a mermaid.
Loading Comments...
Comment
×