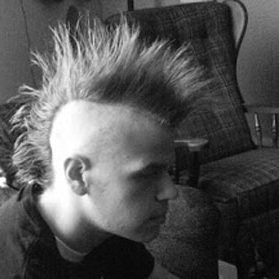 At last: construction of the labyrinth is underway on one of Greece’s uninhabited islands. David Bowie is charged with finding the human donor; Damien Hirst and his assistants are handling the bull head. As he begins his search, David Bowie is amazed and unnerved by how many young bodies are willing to lay down their lives for him, for Damien Hirst. For both of them. The plan is to graft the two together, to house them in the labyrinth.

He more than admires Hirst’s work, his dead animals floating in formaldehyde-filled tanks (although David Bowie feels like he’s clearly been given the harder job). He sees the beauty in taking something you love and preserving it forever. He thinks of his wife, Somali supermodel Iman (for whom he has written songs), who lately has thrown herself even more completely into the charity work that so ages her; his son, BAFTA-winning filmmaker Duncan Jones, approaching fifty; and his daughter, little Lexi (forever little, though she is well into her teens), who will never stop growing. He imagines them suspended in blue.

David Bowie can’t sleep, wrestling with his selection from the college students who offer themselves to his project. He worries that perhaps Damien Hirst—Britain’s richest living artist—uses the word “beautiful” too often when titling his work. He considers the version of the beast that appeared so prominently in his 1995 concept album, 1. Outside, the first in a planned-but-abandoned album cycle of art and murder in the new millennium, now many years too late—the Minotaur as artist, as murderer. David Bowie is wearing earrings for the first time in twenty years, and the only reason he can tell why is nostalgia.

Three feet below the surface, at the center of a maze on an island four miles off the coast of Crete, David Bowie digs up a priceless, diamond-encrusted skull—one of Hirst’s. He realizes, then, that this was never a collaboration at all, but something infinitely more sinister. He imagines Damien Hirst somewhere else, laughing and laughing.

For the next seven years, David Bowie finds only diamond skulls, heads without bodies.

Simon Jacobs is a writer from Ohio currently living in NYC. He curates the Safety Pin Review, a wearable medium for work of less than 30 words, and his writing has appeared in places like Paper Darts, Columbia Poetry Review, Everyday Genius, and Best Gay Stories 2013.

Simon Jacobs is a writer from Ohio currently living in NYC. He curates the Safety Pin Review, a wearable medium for work of less than 30 words, and his writing has appeared in places like Paper Darts, Columbia Poetry Review, Everyday Genius, and Best Gay Stories 2013.