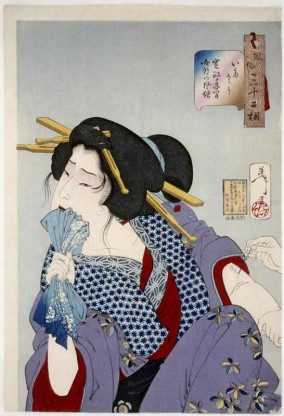 What’s missing from Cirque du Rouge is pretty much anything you might expect in a tattoo shop. The buttery yellow row house on D.C.’s transitioning, quasi-hipster H Street has neighbors that include a CPA, a funeral parlor, a braiding salon, and cozy bistros. Inside, there’s no “flash” – those posters of numbered designs other tattoo parlors offer to walk-ins. Instead, eccentric pieces of art line the walls – cartoon pin-up girls, an art nouveau bare-breasted Indian maiden, an elephant wearing bloomers and a crown. Red metal letters the size of third-graders spell out FUN in lightbulbs. Where a stereotypical shop may have heavy metal screeching over the radio, Cirque du Rouge has Coldplay gracing the airwaves. And then there’s owner Cynthia Rudzis’s taxidermy collection: a jackalope wearing Mardi Gras beads, an armadillo, a caribou head, a skunk, a fox pelt, something that looks like an okapi, and a fist-sized, unidentifiable horned skull wearing a pair of glasses. “I don’t hunt, I don’t like killing things,” she says. “But I do like taxidermy, because it’s an animal that’s still and that I can draw.”

Cynthia and the “Krewe” of Cirque du Rouge are producing fine art for Capitol Hill clientele, and it just happens to be on their skin. In this traditionally buttoned-up city, Cynthia is proving that custom suits and custom ink aren’t mutually exclusive.

Cynthia is forty-eight years old, tall and lithe, with a champagne bob and coffee bangs. She has perfect skin, symmetrical features, and glittering turquoise eyes. Her right arm sports a half-sleeve of a heron in a Chesapeake swamp scene, representing her current home on the bay. A quarter-sized flying pink horseshoe decorates her wrist. She hikes up her pant leg to reveal a framed portrait of her three-footed bearded dragon, Louis. He’s wearing a top hat and smiling, raising a goblet of green liquid in a toast. “There’s no big, deep meaning,” she says. “The pieces I get are just collections of artists that I like.” She holds up her left forearm to show off a Napoleonic bee the size of her hand, framed by green laurels. “I told her, this is what I want, but do it the way you want to do it. That’s how you get the best tattoo.” It’s a collection she has curated since she was “old enough to get a tattoo but too young to care,” when she got a dream-catcher on her butt cheek. “I was that girl,” she says, laughing.

That girl’s artistic aptitude was evident from an early age. “I’ve been drawing since I can remember,” she says. “Seems like that’s the thing I was supposed to do.” Her parents bought her crayons and signed her up for art classes. They’d encourage her to sit outside with an Audubon book, drawing the birds and bugs, flora and fauna. Her taxidermy collection is a nod to weekends in her childhood, when her dad would take her to the Hall of Mammals with a sketchbook and she’d spend the whole day drawing.

As a high schooler, Cynthia had an art teacher named Mr. Merrill who knew her talents could turn into a career. “I wish he was still alive now to see this,” she remembers, gesturing around the main floor of the shop. “Even back then he said, ‘I still think you’re more of an illustrator. Don’t go to art school and let them take all the illustration out of you.’”

Sure enough, Cynthia worked for twenty years in the publishing industry as an illustrator and graphic designer. Then, after a divorce and a new marriage that brought stepchildren into her life, she quit her job and began doing freelance artwork while learning to manage responsibilities in her new household. Some of Cynthia’s prints depicting mythological creatures, the elements, and Celtic instruments caught the eye of the owner of Underground Tattoo in Lexington Park, Maryland, sixty miles southeast of D.C. She purchased them and approached Cynthia, asking if she had ever tattooed. “I had always wanted to tattoo,” Cynthia remembers. “My grandpa was covered, my uncles were covered, all were World War II vets. I loved it.”

So at thirty-seven years old, Cynthia found herself laying a small stencil of a tribal-looking butterfly on the neck of a young woman her daughter’s age. Her mentor was close at hand to take over if anything went wrong. And after Cynthia put in the first few lines, something did:  she accidentally wiped away most of the stencil. The simple design should have only taken ten minutes but ended up taking her an hour. The young woman was pleased with the result, and when she left the shop, the rest of the tattoo staff burst into laughter and congratulated Cynthia. She excused herself and threw up.

In the eleven years since that first tattoo, Cynthia went from an apprentice to a resident artist at Underground to doing guest spots at shops all over the DMV area. And then, a few years ago, her father fell ill, and Cynthia took off four months to take care of him. “He loved his job,” she says. “He’d say, ‘I’m so sorry you’re not going to work.’” After he passed away, Cynthia found two surprises that motivated her to work “harder than ever.” The first: an insurance policy she knew nothing about, which became the seed money for Cirque du Rouge. The second: “A stack of these old illustrations or drawings that I had done,” she remembers, her voice lowered. “And it has my name on the bottom: Cyndy, six years old. He had them. He had them all.”

Since Cirque du Rouge opened in the spring of 2013, the shop has become one of the most sought-after in the district. Demand for Cynthia’s work specifically has grown to the point that she can’t take on any more new clients. In addition to the volume of artwork ahead of her, she has the shop to run, her colleagues to take care of. The work demands a lot – physically, emotionally, artistically – so Cynthia asks the artists to come in and tattoo four days a week. The fifth day is to take care of administrative work – emailing, drawing, and networking. Cynthia, though, tattoos five days a week. After waking up at 5:30, she eats breakfast, walks the dog, and spends a couple of hours drawing for clients – everything from stylized portraits of Vikings to horses with mermaid tails. On her hour-long commute, she checks email at red lights. After tattooing for sometimes ten hours straight, she goes home and works on the business side of things. “I don’t have the time that I used to have,” she says. “Everything is this now.”

Cynthia has the perfect mentality for a tattoo artist, at the intersection of illustration and medical care. All licensed, respectable artists have extensive training in blood-borne pathogens, disease transmission, CPR, and first aid. And these days, most up-and-coming tattooers have formal art education. “It’s so much harder when your canvas is not only curved but breathing,” Cynthia says. Having the basics come naturally means the artist can pay attention to the client’s vital statistics and comfort level. In tandem with top-notch artistic talent is a bedside manner that can jive with the Capitol Hill clientele. “I go through your Facebook page,” Cynthia says of her vetting process, “and if you can’t spell ‘you’ y-o-u… you can be the most talented artist in the world, but I’m not going to have you upsetting people.”

Liaa Walter, another artist in the shop, comes down the stairs and says, “I just need an artist’s eye.”

Cynthia immediately recognizes the client behind her. “Hi Carrie! How are you doing, sweetie?” Carrie is wearing shorts on this rainy autumn day, and when she turns around, she reveals matching stencils of butterflies on the backs of her thighs, connected to laces running down to her Achilles tendons. “Aw, those are so cute!” Cynthia exclaims. She holds out her right hand, forefinger and pinky pointing at the centers of the designs. The three women hold their collective breath for a moment before Cynthia announces, “They’re even with the floor.” She turns to Liaa. “That’s really hard. Awesome. Have fun!”

It’s taking good care of people — both artists and clients — that seems to be the key to Cynthia and Cirque du Rouge’s success. Because of the reputation of her artist’s eye and the years she’s spent tattooing in the area, all of Cynthia’s current projects are for repeat clients. “I’ve been tattooing some people for two, three, four, five years,” she says. “You get involved in their lives – you can’t help it.” Vanessa Redwing, a thirty-five-year-old government analyst, is one of these return clients. She originally sought out Cynthia for her talent in art nouveau pieces and from the start, Vanessa says she was “enamored with her spirit.” She and Cynthia are on their third collaboration, this time on Vanessa’s thigh — a heron and winged insect surrounded by cattails. The first two pieces were half-sleeves. The left is in the style of Alphonse Mucha, a blue-eyed woman looking over her shoulder, framed by windswept auburn hair and orange and pink lilies. Vanessa’s right arm displays a peacock skull against a collage of crimson roses, emerald peacock feathers, and violet beads. Rarely does Vanessa leave the house without receiving compliments on her tattoos. “People ask me if my tattoos hurt,” she says, “and I tell them that I enjoy my time with Cyn and the artwork we collaborate on so thoroughly that I don’t mind the pain.” It’s a pain some people liken to an extended bee sting – but you’re enduring it for hours rather than swatting it away. Cynthia calls herself “the biggest weenie of all” and says she struggles with sitting for her own tattoos for more than three hours. The portrait of Louis, the three-footed bearded dragon, took five. But as she points out, the pain can’t be all that bad: “If it were horrible we wouldn’t be in business.”

And since the demand for business is good, Cynthia’s not afraid to turn away potential clients – for herself or her artists. While walk-ins are welcome, no one at Cirque du Rouge will work with minors, anyone whom they suspect to be high or inebriated, or lawyers who joke about suing if they don’t like the result. Other times, what the client asks for may not fall within the expertise of any of the artists at the shop. In that case, Cynthia is usually able to recommend other gifted artists in the area. Recently, a man met with a female artist in the shop to discuss a tattoo on his hip, and he pulled his pants down to his knees — completely exposing himself. Cynthia called the cops. When the man contacted the artist again, Cynthia intervened and told him that because of his “unfortunate choice” they were clearly not the right shop for him. “But I can’t think of any shop that would be the right shop for him. I mean, at least ask first!” she laughs.

“You can’t make friends out of everybody,” she says, “but you tend to. You’re spending a lot of time. They’re uncomfortable. They’re trusting you. There’s that leap of faith — between the idea coming from their brain, to talking to you, to seeing it on paper. And then there’s still that leap between seeing it on paper — because all you’re seeing is an outline — to seeing it all done. It’s trust. It’s a lot of trust. So that’s a little overwhelming sometimes, that people trust you that much.”

Melody Rowell lives in Washington, D.C. She received a B.A. in English Literature & Critical Theory from William Jewell College and an M.A. in Nonfiction Writing from The Johns Hopkins University.

Melody Rowell lives in Washington, D.C. She received a B.A. in English Literature & Critical Theory from William Jewell College and a M.A. in Nonfiction Writing from Johns Hopkins University.