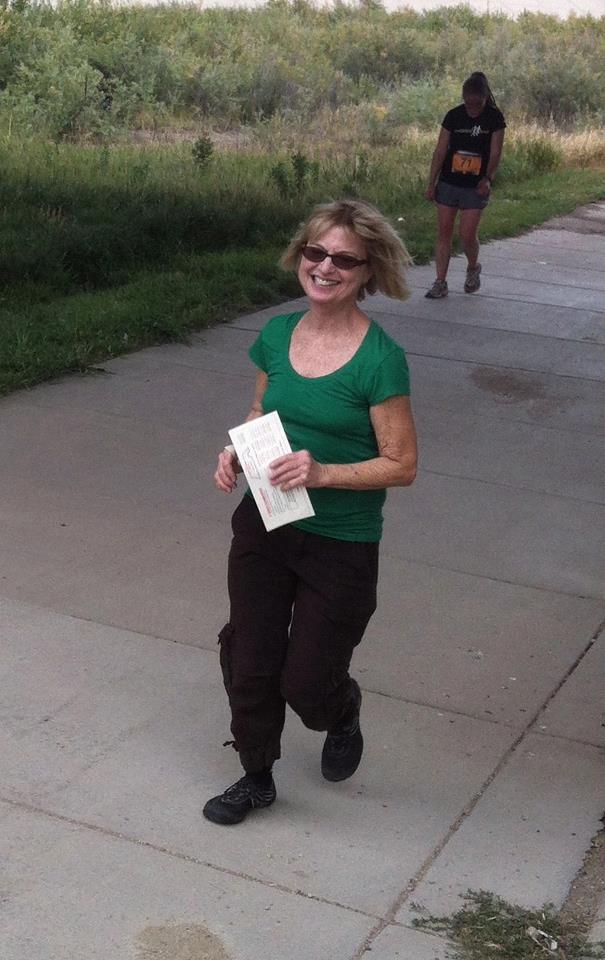 I am sitting in the passenger’s seat of my mother’s Honda Civic. It’s 5am, and she’s driving me in the dark to the marathon I’m about to run. I’ll be running 26.2 miles today, and we’re both antsy as hell to get to the start, to get there on time. And I just want to start running already, just want to run away all of this anxiety I’m feeling over the fact that I’m about to do something incredibly painful. We are driving through downtown Colorado Springs, my mother pushing the car 7 mph over the speed limit. I am checking her speedometer, because we don’t have time to get pulled over for a speeding ticket. Just as she teeters into the 43mph range in a 35mph speed zone, she catches up to a car that is barely crawling at 15mph on this one-lane street.

“You fucker,” my mother shouts at them.

I laugh, as she only curses when it’s absolutely necessary. And this is necessary. There is no time for slow people right now as we’re rushing to get to my race.

“Where are they from?” She questions as she looks at their unfamiliar license plates. “Oh! No wonder. They’re from Tennessee. Those out-of-staters have no idea how to drive.” She honks at them, and they slam on their brakes, wondering what this car behind them is honking at them for. My mother rolls down her window and screams, “God! Get moving!” They ignore her and crawl along in the dark, barely pushing on the accelerator.

My mother whips around them at a corner, and takes a short cut to get to the highway. As we drive north to the start of the race, I realize I’m about to run all of this distance back to downtown Colorado Springs. This isn’t the first marathon I’ve ran. In fact, it’s my sixth. Plus the four 50-mile races I’ve done, and the countless number of 31.5 mile races I’ve also done. But I took two years off of running, and just got back into it four months ago. And here I find myself, about to run a marathon. I know I’ll start. I know I’ll finish. I just don’t know what the hell the in-between is going to be like. Most likely, it ain’t going to be pretty.

We get to the starting line just as the sun is rising, and with ten minutes to spare until the race starts. I’m cold in my ridiculously short running shorts and little “breathable” running top. But when the sun comes up, it will be hot and I’ll be all sweaty, and salt will start leaking out of my face, because shit like that happens when you run for a long time.

The race starts, and less than 100 meters into it, I run by my mom who will be cheering me on for the whole time. She’s standing to the left of the stream of runners, and shouts at me as I run by. “Go Chelsey! You’re almost there!” What the fuck? I got 26.1 more miles to go, but this is my mother’s idea of humor, of getting me to smile in order to keep my legs going. The runners around me laugh at her, as do I.

At mile ten I run into my mother who is jumping up and down and screaming my name. She’s about 5’1” with a skinny little body, and so she looks like an ecstatic four-year-old prancing around to get all of that little-kid energy out of her. By mile ten, though, my legs don’t feel like going anymore. I just want to stop. Aside from the pain that is kicking up in my calves, I’m also on my period, and can feel the cramps starting to kick in. I imagine little raccoons digging their claws into my uterus, their tails sticking out like an uncomfortable tampon. The raccoons claw away, and my calves lock up, but somehow I lug my body around for another eight miles.

My mother has more of a tolerance to pain than I do. Proof of this: at mile eighteen I’m hobbling along because all of the muscles in my legs have turned into knots. I come to the spot where she has camped out at in order to cheer me on, and there she is, running up to me in her bright green shirt and short blonde hair. “Come on Chelsey! You’re doing great!” She hollers at me. “Just run through the pain!”

I start walking. I hang my head down as she runs ahead of me to grab me some water. She’s in a full-glee running spirit, wanting to encourage me to do better, but all I can do is breath through my nicotine-fried lungs and feel the pain.

Five things that describe me:

Which of these things is not like the other?

But my mother tells me to push through the pain, as if pain is something I can just get over. As if I can just push my legs a little harder, the pain from running going away as I encourage them to work harder.

That’s not logic, that’s my mom trying to get me going.

“My love for you depends on you finishing!” She jokes at me. And I laugh, and I jog a little bit faster.

I walk/run/pull my body along to mile twenty-five, and I feel like I’m going to die. The sun is leaking into my skin, the salt is pushing out of my face, and now I have blood from my raccoon-scraped uterus starting to stream down my leg. Like I thought, this wasn’t going to be pretty. But there’s one mile left, and so I start to “push through that pain” and I start kicking it, and with .2 miles left I sprint the rest of the way in.

And my mother cheers me on at the end of the race, and she hugs and kisses me when I’m done. And she tells me “you kicked the shit out of that fucker.” Yes, she only curses when necessary.