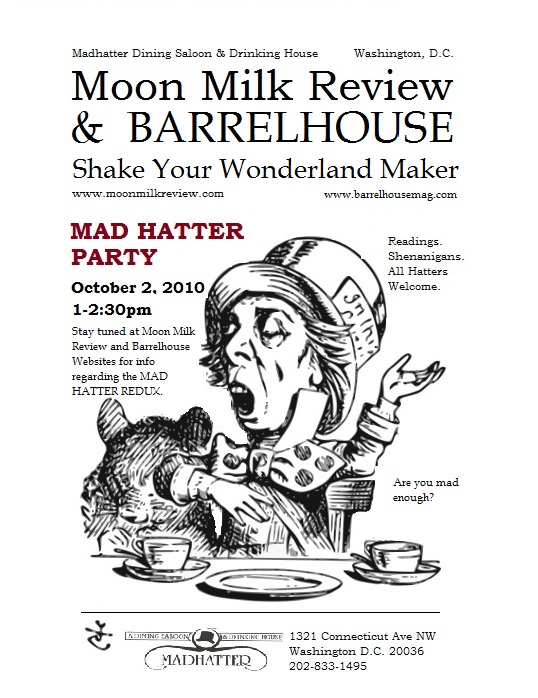 Rachel Bloom | is an actress, writer and comedian based out of NYC. She graduated from NYU, Tisch School of the Arts in 2009 with a B.F.A in drama, having studied with the CAP 21 musical theater studio, Experimental Theater Wing, and the International Theater Workshop in Amsterdam. At NYU, she was also the director of Hammerkatz, NYU’s premier sketch comedy group. Rachel has studied improv under Shannon O’Neill, Anthony King, Zach Woods, Chris Gethard and Michael Delaney. She has also studied sketch under Eric Drysdale. Rachel performs standup all around New York City and hosts a standup show called “Annette Funicello’s Beach Party” every last Monday of the month at National Underground. She is also a member of the improv group Mastodon Mattingly. She really likes the show “Frasier.” (UCBComedy.com) Join Rachel as she performs stand up at the Moon Milk Review 2010 Mad Hatter Party.

Lisa Marie Basile | Lisa Marie Basile is a writer, living in New York, and Editor-in-Chief of Caper Literary Journal . She has had work published in CommonLine, Aphros Literary Magazine, Vox Poetica, and The Medulla Review, among others. She studied English Language and Literature at Pace University in Manhattan, where she received 1st place in PU’s Annual Writing Contest for poetry and fiction. She is currently an MFA student at The New School. Her web site is www.lisamariebasile.com and www.caperjournal.com.

Winona Wendth | Winona Winkler Wendth is a peripatetic New Yorker and freelance writer who lives and teaches writing and literature near Boston. So far, her work has appeared in Spectrum Magazine, Third Coast, Falling-Apart.net, The Bennington Review, and The Yale Journal of Humanities in Medicine. She holds an MFA from The Bennington Writing Seminars, is a film buff, not a bad photographer, and a pretty good cook.  She spent a couple of years working in a law firm that specialized in corporate defense.