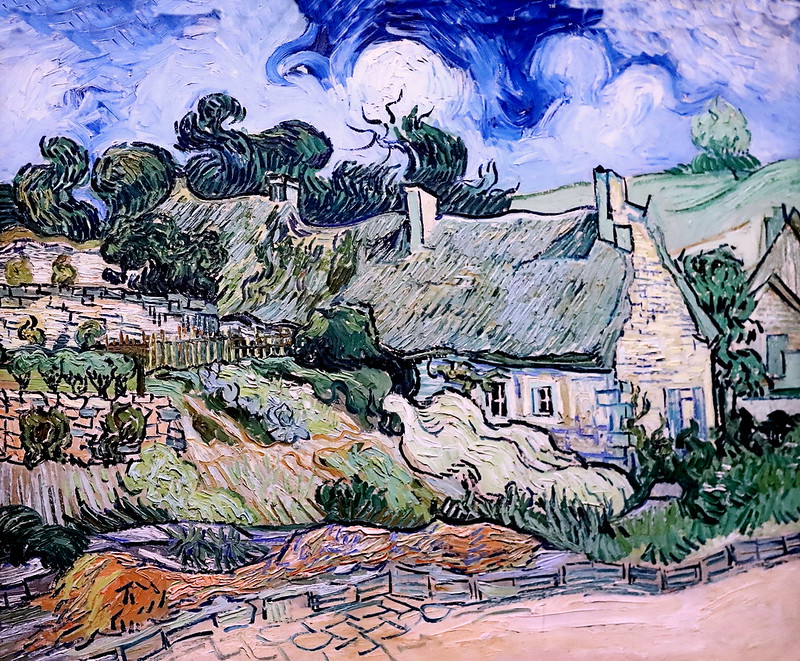 In fall 1985, I was sitting on a bench at the Van Gogh museum in Amsterdam staring at his View of Auvers, 1890. There were tears in my eyes, causing a young woman seated next to me to whisper to me, “It’s wonderful to see a man so moved by art that he weeps.” I sighed. Did not respond. I was crying not because I admired it, but because I did not experience what other people apparently experienced. I was unmoved by what was in front of me. I did not think it was beautiful. I felt like an atheist in a chapel watching the faithful pray to a God who seems to speak just to them.

A few months after Amsterdam, I was living in Copenhagen, and my new Danish girlfriend was happily recounting the month she lived across from the Tate Gallery in London.

“Every day, Michael, I went to the Tate and spent the whole day in one room!”

“Darling Annemette,” I replied, “I went through the Louvre in an hour and half.”

“That is because you are a brute!” she replied, kissing me on the nose.

Our relationship didn’t last, but her comment continued to resonate in my find.
A brute? Unthinkable. As part of my Bachelor’s Degree in Fine Arts/Music, I had taken courses in art history, figure painting, water painting, sculpture. I had been taught how to look at art, how to recognize the formal organization of a painting, recognize the development and use of perspective, as well as brush strokes, chiaroscuro, nationalistic styles, etc. My BFA attested to the fact that I was certified able to seek out and understand art.

Over many decades I have visited museums in Europe, New Zealand, Mexico, and Senegal. I’ve been to the Dali-Theatre Museum in Figueras, attended COBRA exhibits in Amsterdam, the Uffizi in Florence, the Matisse Museum in Nice, a Gaugin retrospective at the Louisiana Museum of Modern Art outside of Copenhagen, and many other museums in Denmark, New Zealand, France, Spain, Germany, Italy, England, Ireland, etc. Two years ago, I managed to tour the entire Metropolitan Museum of Art in New York in eighty minutes; spending about a quarter of that time enjoying the peace and symmetry in the Chinese Garden. My response to the vast tribute to marble was barely a casual glance as I hurried through the galleries, unmoved, except my legs were getting tired and my feet were sore.

Which brings me to the thrust of my argument. Numbers. I love numbers. For example, if you divide the number 782,910 by two, you get 391,455.
These are not just random numbers. The first number represents the area in square feet of the Louvre in Paris. The second number is an estimate of how many two-foot-long strides it would take to walk through that edifice to culture; almost four hundred thousand steps. That’s over one hundred and fifty miles! And if you walked at two miles an hour, it would take about seventy-five hours to see the whole place! That’s forty times the recommended daily number of steps for those who wear Fitbits. Over six marathons.

And if you divided the number of steps by ten, you get 39,145, which is approximately the number objects duh’art in the Louvre, many of them surrounded by twenty-foot deep, and often stinky, walls of humans gazing at the paintings.

In 2019, nine point six million people visited the Louvre. That’s over twelve times the square footage of the Louvre. Like I said above, I love numbers.
So if the average height of a visitor is five feet, that’s the equivalent of stacking visitors over fifty feet in the air on every square foot of the Louvre. People at the top of that stack could touch the Winged Victory of Samothrace on the second floor while those on the bottom could visit exhibits on the first floor.

I’m sure I’m not the only human who has accompanied friends to the Louvre and other art museums housing collections of some of the most boring objects ever created by otherwise unemployable humans. Museums don’t even have comfortable places to sit, with back rests. Instead there are benches where you can rest from time to time, but they are placed so far apart that my Fitbit registers 500 steps to get from one to another. If you’re really lucky, like at the Metropolitan Museum in New York, there might be a Chinese garden you can rest in, check your emails, and wait for your exhausted compatriots to absorb as much culture as they can bear.

Museums really ought to start thinking of people like me; men who are dragged from one building to another by a spouse or girlfriend in the hope that I will come to appreciate the contents so as to become a more civilized person; sort of like Joseph Goebbels or Adolph Hitler or a great number of other Nazi officials who loved art so much that they stole thousands of art pieces, so they could appreciate them privately. The appreciation of art pieces was very important to them.

It was while at the Metropolitan Museum of Art, however, that I came up with a great idea. If museums offered visitors like me the opportunity to rent a Segway to view the exhibit rooms, we could move through the exhibits much more efficiently. For younger visitors, they could rent Segways shaped like animals, like an elephant or a kangaroo.

Speaking of kangaroos, there is a myth that the word “kangaroo” means “I don’t know” in a local aboriginal dialect. That is not true. Neither is it true that kangaroos don’t fart. Scientific investigators have disproved this “walkabout with a Fosters in hand” myth. Museums would do well to focus more on the examination of these kind of myths. I certainly would enjoy them more.
Anyhow, I would love the opportunity to zip around the Louvre, able to take pictures over the heads of throngs of people standing in front of the Mona Lisa arguing how to pronounce La Giaconda correctly. Or arguing about how best to pronounce the word Louvre, with some of them pronouncing it like they’d stuck a long-necked beer bottle down their throats to get the pronunciation “authentic.” I kept expecting them to hack up some phlegm when they finished.

Museums, on the other hand, would probably be reluctant to rent them because of insurance liability, so people could just rent them and bring them to the museums themselves. Some of them even come with helmets outfitted with GoPro cameras. Segways rent for about thirty dollars an hour in Washington, D.C. After touring the museum, I’d still have about half an hour left that I could sight-see on my own.

Michael Coolen is a pianist, composer, actor, and writer living in Oregon. In addition to three Fulbright Fellowships and four National Endowment for the Humanities Fellowships, he has won awards from the Oregon Poetry Association and the Oregon Writers Colony. His essay “Let Me Tell You How My Father Died” was given first prize in the 2017 national “Ageless Authors” competition. He’s been published in Oregon Humanities, The Gold Man Review, Best Travel Stories, Clementine Poetry Journal, Creative Writing Institute, Rats Ass Review, Broken Plate Poetry Magazine, The Poetry Quarterly, Mystery Magazine, et al. He’s a published composer, with works performed around the world, including at Carnegie Hall, New England Conservatory of Music, Museum of Modern Art, and the Christie Gallery.