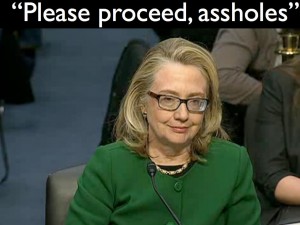 Hillary Clinton has officially been called out for being facially impolite in response to Benghazi questioning and Rand Paul’s “If I were president” lashing. The buzz is all about Clinton and the upcoming 2016 election. Will Clinton get the Democratic nomination? Will the Republicans try to run a woman for the presidency, too? Will Hillary Clinton be asked to have a cookie bake-off, again, before voters will let her live in the White House or will Bill have to step in? Will it be his recipe or hers?

The cookie bake-off has been a tradition for First Ladies since Clinton’s ’92 I’d rather work than stay home and bake cookies challenge that spurned a conservative media-wide cookie incident. How dare a woman, a first lady contender, shit on the office of cookie baking? I’m curious as to what the manly display of First Gentleman? First Man? First Dick? (I don’t know, what the hell are we going to call him?) will be. The biggest fish, the biggest buck, who  can hold off ejaculating the longest? A happy, well-pleasured President is a productive President. The competition has merit. But it brings to mind specifics. At that age, performance enhancers are kind of a no-brainer, right? If the First Gentleman contenders were going to have a Jack-Off then it really wouldn’t be much of a competition without a little help. Maybe I’m stretching, though, it’s interesting. And performance anxiety would be an issue, though, wouldn’t it be like juicing? A Lance Armstrong?

Or maybe the idea of First Gentleman Jack-Offs is as ridiculous as First Lady Bake-Offs. I’m just thinking out loud here.

Rae Bryant’s short story collection, The Indefinite State of Imaginary Morals, released from Patasola Press, NY, in June 2011. Her stories have appeared or are soon forthcoming in StoryQuarterly, McSweeney’s Internet Tendency, BLIP Magazine, Gargoyle Magazine, and Redivider, among other publications and have been nominated for the Pen/Hemingway, Pen Emerging Writers, and Pushcart awards.  She writes essays and reviews for such places as New York Journal of Books, Puerto del Sol, The Nervous Breakdown, Portland Book Review and Beatrice.com.