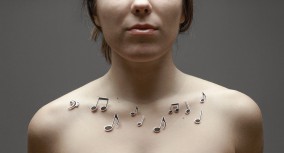 Being one of the few who can call themselves lucky enough to be blessed with real-life synesthesia, I romantically like to think I was born with a different perception of the world. Chocolate tastes like a warm opaque river, electronic music sounds like playing hopscotch with the stars somewhere in the milky way, and the letters M and O in combination shoot up my nostrils like a freshly peeled nectarine, leaving a flashing hint of ochery orange and the faded green of its dried, crumbling leaves in the corner of my eye. I remember hour-long discussions with another synesthete friend of mine about whether The Avalanches’ ‘Since I Left You’ record was snow-coloured or more of a liquid, almost nebulous periwinkle, analysing the colour composition of each explicit song of the album in meticulous manners.

And this habit of mine initially determined the way I would approach writing in general: I would sit in front of a piece of paper, be it virtual or real, and let the multivalence of colours, smells, tastes and touches that had bickered from the arch of my perceivable environment into my brain and body, pour out of my hands in tides, high and low. I would carefully tie the ends of my synesthesia experience into the web of my emotions and create a rendering of my version of reality, a glimmering cobweb in which I would sit in the middle, as the big, fat and ridiculously proud spider. My writings were superfluous in colours, in smells, in synesthesia as a stylistic device where the image and analogy were not invented but actually experienced. It is almost impossible to explain to a non-synesthete adult (children, due to their unbounded fantasy, somehow understand) that voices can ring as glassy, jagged and bright flies through a room, or that somebody’s smile tastes like a peppermint candy, or that I can walk through a perfumery for hours, scenting the flacons of orange blossom, pink pepper and sandalwood with my eyes closed, while myriad Rorschachs of liquid colour pyrotechnics explode inside of me. But you can, as odd as it is, describe these things in a piece of writing. You can translate your experience into a metaphor, you can build a (semi-) analogy with words, present your ‘illness’ in a fancy, sequinned but sometimes melancholy dress and call it a piece of art. This is what I did throughout my teenage years and early adolescence: I never thought of a metaphor, I just felt them. I was a lazy writer.

But there comes a point when you realise that a metaphor is more than a feeling, that creating a metaphor and an image for a piece of writing is a sober craft and that poetry is a hard, fastidious art — as a matter of fact, it is the hardest and most fastidious art of all literary arts. In a novel, an excessive word, an excessive sound will go unnoticed, whereas in the short-lived breath of a poem a single sound can weight the musical harmony out of balance, and a single word can cause a sesquipedalian undertone. A poem is a translation of a statement, or, more frequently, of a question. It is a differentiation and it is a transformation, but it is a translation nonetheless. It is preferable if your metaphor is precise, but most and foremost, it has to make sense. You start asking yourself: is this specific word and its attached image only there to mask something? If so, get rid of it. Tell the truth. Of course, poetry is pretty; but it is not there for the sake of being pretty. A good poem, like all good pieces of art, exists to tell the truth, whether it is a universal or individual truth is not of any importance – for each individual message, if told veraciously, becomes universal. A poem is a corset into which one can compress a lifetime or decompress the indistinct momentum hushed through the corner of an eye, a poem is Cowper’s ‘The Task’ and a poem is a haiku. And, as with all great pieces of art, there is something unexplainable happening with poetry, no matter how much mathematics and logic we employ to dissect, analyse and interpret it, or how much precision and verbal hygiene we deploy to write it. There must be a flash of lightning, the kiss of the muse or a stroke of divinity which renders the creation from the subjective margin closer to an objective threshold where it is pleasantly received by a group of people, a necessity without which art would not be perceived as art. But this essay shall not philosophise about the magic behind the witchcraft of writing, it shall proceed to explain the birth of the poem Heroin, my personal experimental brainchild of synesthesia and poetry.

Interestingly, I wrote the first version after one of my very good friends, who happens to be a very good poet, responded to my request for poetic advice with a suggestion to omit my synesthesia once in a while. Being obstinate as I am, I tried to avoid her suggestion at first, drooling over the mesmerising incoherence of my sensory perception. But as my editing processed, I found myself excluding more and more words, as I simplified my metaphors and reduced the attached vocabulary to its bare minimum.

But let’s start at the beginning, with an explication of the background story: the title refers to one of the most addictive drugs known to humanity, the dangerous, infamous excerpt of the opium poppy. Any drug-consumer or The Doors fan will immediately pry that this is not a literal description of a heroin high, but that I borrowed the cliché of an injection to explain my own little story. In fact, I borrowed the image of a heroin injection to convert the notorious and ubiquitous loneliness after a break-up. It transfixes the simple sinister-ness of unrequited love, the old-timer in the garage of poetry. Heroin as such is a variable. As the speaker is found in the bath tub, I want you to imagine anything as the meaning behind heroin: the smoking of a cigarette, the unhealthy contemplation of haunting memories, the obsessive compulsive instinct of self-mutilation or even the genuine drug injection itself. Heroin is a poem about the paradoxical satisfaction gained through a ritual of self-harm, as disturbed as it sounds.

I ripped my voice off all embellishments in regards to the language and the imagery, and thereby hazarded an innovative approach to writing. The ‘green liquid silhouette of a cityscape’ of the bath-water spectacle was deconstructed to become ‘diffusing […] billows’, the deep-purple gallons of lipstick-créme that twisted around and smeared my ribs were turned into ‘plum matte cotton beds’, describing the memory of the lips. Likewise, the storm of transparent pollen and vitreous flower bouquets were chopped to a ‘thousand colourless petals’, which, in retrospect, is a more apt metaphor for the triste outcome of the self-harm high, which is a quite depressing action in the first place. But I remained keen to keep my sensory experiences inside of the poem, with one exclusion. We have the touch of the syringe and the wet of the bath water, we have the distinct eucalyptus smell of sinus relief oil, we have the green colour of the water, the purple lips, we have the taste of honey and plums. However, and importantly so, we have no sound except for the speaker’s own carotid uncovering the anxious beat of her own heart, an omission which serves to amplify the purpose of the very last couplet, namely the ‘silence’ and the subsequently achieved ‘ecstasy’. Technically speaking, we have the surreal, inaccurate memory of the chatter of a Sri Lankan folk (a device that is in accordance with my real-life experience which inspired the poem and which furthermore adds more colour, the colour of skin), but this image – or sound, for that matter – only elucidates the uneasy, personal relicts of a past time, relicts that are liquidated and muted by the injection of the heroin. The juxtaposition of the utterly antagonised time intervals of three thousand years against three and a half hours naturally adds a layer of irony to the poem, albeit a tragic kind of irony. The literal honey lasts infinitely, whereas the figurative honey spalls and disappears within a couple of hours, just as the actual human interaction vanished within a breath, but the memories – it is getting gooey – they last forever.

Essentially, Heroin is a gloomy poem, but it is not the saddest poem I have ever written. I wrote it to condense the sharp and cynical emptiness of solipsism. I wrote it to entrap a tiny sense of the weird, infinite and inevitable void which humanity perpetually tries to avoid, which we try ignore and circumvent, but which, whenever we take the time to breathe in and out consciously, smilingly awaits us with all its awe-inspiring and magnificent glory.

All in all, especially considering the transition from my oozy, flatulent writing to this newer and yet unfamiliar territory of simplicity, I must admit that Heroin feels like a construction site to me, but a beautiful one nonetheless. I see the scaffolding shining from the form, the choice of language, the rendered imagery – I want to edit the shit out the lines and the sound devices, but at the same time, is that not so often the case with poetry? And with art in general? As Michelangelo once said: Art is never finished, it is only abandoned.

Aria Aber (b.1991) is a German-Afghani writer who is based in London, UK and Münster, Germany. Her work has appeared in ‘Smiths’ and ‘Industry of Fools’, as well as other German zines. Currently, she studies English Literature at Goldsmiths, University of London.

Aria Aber is a German-Afghani writer. She reads English at Goldsmiths, University of London. Her work appeared in 'Smiths' and 'Industry of Fools'.