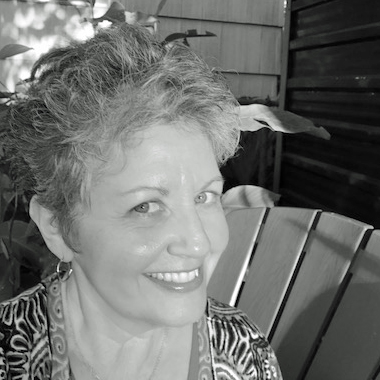 A Few Simple Reasons Why She Couldn’t Be His Bitch

Though she kept one special pair folded in the corner of the closet’s toppermost shelf, Janet would not wear jeans. Well, she could wear them, of course. She had long lost whatever extra weight she had carried after Alex was born, and that was almost twenty years ago.  But jeans on her body now had the effect of bondage. She strained against the stiffness of the waistband; she suffered under the weight of denim on her thighs. How she had ever worn them, day after day back in the day, was beyond her.

She thought of this as she sat at the light, car windows open, heat shimmering the air, too much sun bouncing off the sidewalks and the white cars, the white trucks, and a white woman, just ahead, her flesh a plump roll over the low beltline of her jeans, her hand lifting a wind-draggled ponytail from her back.  The hair was blonde, long. Her legs bookended a man who shifted his weight to the right as the traffic light glowed red. The woman rubbed her hands along her thighs, tight in denim.

The light changed and the woman’s arms were around him once more.

The bike slipped into another lane and disappeared.

Janet finally had come to the point where she had stopped following bikes to see if the rider was Dave.  At first, it seemed that every man was.  Janet laughed at that – Dave had always had blended into the crowd so easily before, with his polo shirts and khakis, his glasses and baldness and that remaining fringe of copper hair morphing to a paler shade of nothing special.  He faded into every wall.  Once, when coming late to a party, she had marveled over how she had walked right by him and not noticed – odder still because she had been looking for him at that very moment.

But after he left, he wasn’t  invisible; he was ubiquitous.  Janet would hear a motorcycle, and there he was. Or she would be driving down a busy street, and there he was. She would see his back as he entered a Burger King. Or a Rite Aid. A convenience store. A gas station.

Or once: a stranger’s sun-splintered front door.

It was Dave. It wasn’t Dave. Every man was Dave until she noticed that the shoulders were too wide, or the lank of his walk a little too relaxed, or the hands too large or too small or too hairy.  Every bike was his until she came close enough to see the motorcycle wasn’t black, or was too narrow, or did not have the odd silver ribs that coiled over what she assumed had to be the engine (or perhaps were the engine, for all she knew).

She had never noticed how many women there were on the backs of motorcycles until the day a helmeted Dave roared into her driveway. She had never noticed that every woman on the back of a bike wore jeans. And she only noticed that because of the night he had brought up jeans over dinner. They were still married at the time. Alex was still in the house. Across the room, near the couch and love seat, an episode of Star Trek blared from the television: better Mr. Spock than the ever growing silence.

They had been talking about Christmas. “I don’t want anything,” Alex said.

“You must want something, sweetie,” she said.

“You always get me corny stuff,” Alex said, his eyes on the TV across the room. “No offense.”

Suddenly, there was the sound of a pinball machine, and Alex reached for his phone. “Yeah?”

He was already out of his chair. “I gotta go.”

Jan pushed away from the table. “Alex, we were talking.”

“Get me money,” he yelled, and then there was the sound of the front door closing.

Dave reached over for a second helping of lasagna. “Yeah, Mom. Money’s not corny.”

“Get me money. I give up,” Janet said. She tucked her leg underneath her.

“You never wear the jeans I gave you.”

Janet looked across the room. Captain Kirk was flipping a man into the air. To tell the truth, she had forgotten about the jeans. She could not remember if he had given her anything else that year, or what she had given him.  She did remember that there had been no jewelry under the tree.

She swallowed a swirl of cheese. “I wear them.”

“Christ.” Janet had wondered why he had given an article of clothing he hadn’t seen her in for years, though maybe that was the point. For her, the days of jeans and tee-shirts were long past gone. Janet wore long cardigans and never bared her shoulders in public anymore. Janet wore long silky half-slips or cotton petticoats and long, flowered skirts: flimsy, filmy things that brushed her ankles and dipped in puddles and dusted stair steps,  billowing in her path when the breeze was strong.

Two years passed. Maybe three. The lawyers had said only one need be present at court the day of the divorce, but they both came. He was in a leather jacket, his feet in new boots, and his wallet attached to a chain. Janet had showed up in old gold lockets, shades of green, her skirt a meadow. He said she looked like something out of Little House on the Prairie.

“So are you bringing your bitch to dinner?” Jan placed a dish in the dishwasher so she wouldn’t have to look at him. The dish was actually clean but if she looked at him she’d laugh.

Dave had come over to the house to pick up a set of screwdrivers he had left behind in the move. “Are you asking me if I’m bringing a date? To Thanksgiving? With Alex there?”

“No, Jan. I’m not bringing a date to Thanksgiving. And why are you talking like that, anyway?”

“How many bikers do you know?”

“No. A short story.” Actually, it had been in an article.

“In a magazine,” she continued. “In the doctor’s office.” She had been up all night, reading not so much about bikers but about women who rode with bikers. There was “Tips for Women Who are Dating Bikers,” and “My Life as a Biker Bitch.” There was the video on YouTube called “Biker Women compete for Miss Cooks Corner Title 2009.”

She didn’t know which bothered her more — the demeanor of the contestants as they took to the pole or the lack of punctuation in the video title.

“Um, okay.” He looked around the room until his eyes settled on the framed montage of photos on the wall. Photos of Alex from blond hair to brown, from diapers to some point in high school. “I don’t think I got any photos,” he said. “How come I didn’t get any of the photo albums? Did you keep them all?”

She couldn’t be his bitch, but she had been his wife. And according to what he had told his lawyer, she was no longer his wife because she had been a bitch.

“That wasn’t on purpose, Dave.”

He turned around and looked her in the eye for the first time since he had walked through the door. “I told you, it’s David. DA-VID.”

“DA-VID.” Clearly, she could not be his bitch because she insisted on calling him the name she and everyone had always called him. Because she could not get the hang of calling him by his full name, the name on his birth certificate, the name he had said (this at a party, so very long ago, when she still wore jeans and he still had hair and their bodies were strangers to each other, strangers destined to meet later that night) was only used by his mother, and only when he was in trouble.

“Everyone calls you Dave.”

“Not everyone.” He reached into his back pocket and pulled out a red bandana, new but not stiff. He rubbed the bandana over his pink scalp, and then his brown neck.

She thought of the ID that would hang from the rearview mirror of the Carolla when it wasn’t around his own neck at work. Did the heavy black type say Dave Tubman or David? She could only remember the picture. He was smiling and his forehead was shiny, too shiny in the light. The light seemed to bounce off his forehead, or maybe it was jumping off his glasses. That was it…it jumped off the glasses. It was a terrible picture of him in that it was not an attractive picture. His face looked oily and he wasn’t smiling.

Janet felt a chill falling about her bare neck and shoulders. She had been stepping out of the shower when she heard him ringing the doorbell and so had thrown on a tank top and skirt, not taking the time to dig through the drawer for panties and bra. Now, standing there, she felt naked.

Dave turned his back to her to leaf through the stack of mail she had been saving for him, and she found herself staring at his ponytail. She couldn’t help it – it was only the second time she had seen it gathered in a rubber band, and it took all the strength she could muster to not run in to the bathroom and get him a coated band that would be gentler on the strands. As it was, he had nearly torn her head off last time when she said something about his ponytail.

So Janet found herself staring at his hair. His brownish, grayish, thinnish, ridiculous curling finger of hair.

“You can throw most of this out from now on,” he said. “I just changed my address with the post office and the banks. The credit cards.”

“I don’t want to be responsible for figuring out which of your mail is important.”

“I’m saying that the mail should be coming to me from now on, anyway. Just throw the junk away.” He took a moment, took a breath. “Or if that’s too much trouble, put it in a box. I’ll come by and get it.”

He turned around. A steel-colored goatee matched the oddly reddish mustache. “You don’t have to be here. Unless you’ve changed the locks.”

“Not yet.” There was a spot or two of dried coffee on the counter and before she realized what she was doing she wet her finger with spit and smeared it away. When she looked up, he was staring at her.

“Whatever.” He patted the screwdrivers in his jacket pocket and headed toward the door. The chain to his wallet jingled daintily. She followed him as far as the doorway and watched as he looked right and left as he walked across the lawn. She stepped back inside and leaned her back against the closed door, listening to the sound of the motorcycle as it pulled down the street.

She was not too sure how long she had been standing there, but it was long enough so that when she moved to turn around and lock the door, she felt the skin of her upper back peel slowly away from the door. It gave her the tiniest of shivers.