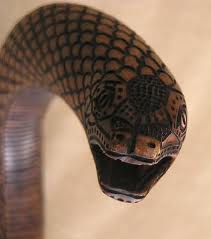 Finn was an alcoholic cabinet maker. Ruddy and unshaven, a scar on one cheek, eyes sunk back in his head, he would get drunk, commit some Cool-Hand-Luke-type crime (though this was ten years before the movie came out) and, once convicted, have himself transferred back to the Crisp County Work Camp, which he seems to have used as a substitute for rehab.

In the mornings he walked to Warden Dub Goff’s woodworking shop, like it was an ordinary job, and at night he returned to the white sleeping quarters, just as he would have gone back to his house, except there wasn’t any liquor there to get him in trouble.

In the shop he made all sorts of furniture—cedar chests with complex parquetry, chairs and headboards with turned posts and rungs. Everything looked professionally made, and Finn was a professional, a master cabinet maker. He just happened to be in prison.

It was Finn who made the checkerboards the prisoners and guards played on during the weekends. He cut the squares from sheets of plywood, sanded them down, painted the check pattern, white and black, never red. When the warden’s son Bill wanted a boat to take out into the pond, Finn built one for him.

Finn knew masonry, too. Dub assigned him to teach Bill how to make a block wall. You never knew. The skill could come in handy some day.

During the first lesson Finn laid the blocks perfectly, the way he did everything, but on the second day the wall began to waver. Nobody quite believed it at first. Finn wouldn’t ever lay blocks crooked. That wall had to be straight. Their eyes were playing tricks on them. But the more blocks Finn laid, the more crooked the wall became. Finally somebody questioned him and realized he was drunk. Somehow Finn had managed to get alcohol in the prison.

The construction came to a halt. The guards questioned Finn.

Where did he get the liquor? Finn wouldn’t say.

Shakedown: the guards checked the toilet bowls—a common place to brew mash. They went through the wooden lockers, looked up under the tables between the bunks. They felt out the mattresses and frames. They found some shanks and a lot of pictures of women in various states of undress, but no liquor.

Was the bottle buried somewhere between the main building and the shop? Was it hidden in the shop itself?

It turned out to be right in front of them, in the fire extinguisher. Some inmates had sweated away the top, poured out the chemicals, and filled it with a mash made of bananas, among other things. They put the lid back on with some match stems tucked under it so the gas could escape. That way the fire extinguisher wouldn’t explode as the mash worked off.

So Finn had gotten drunk off banana mash.

The mess was poured out. Finn sobered up.

In the morning the perfectionist had to face the crooked wall he had made. It would have been painful. Even that banana mash hangover wouldn’t have bothered him nearly as much as the sight of the previous day’s work. That crooked wall was a reminder of why he’d gotten himself arrested in the first place, of what he was when he was drinking.

Finn tore it down, started over, and laid it perfectly straight. He taught Bill the basics of masonry. When the day was done, he returned to the white side of the prison, just as he would have come home from a job. In the morning, he came out, spent the day working in the shop, making furniture, sometimes with Dub, often alone. He went on Saturday too, even Sunday if he could, while the other inmates visited with their families. Nobody ever came to see Finn. Finn didn’t have any family.

In the evenings Finn lay in his bunk, chain smoking hand-rolled cigarettes, listening to Jim Reeves sing “Four Walls” on the radio. He kept to himself.

Even while working by Dub’s side in the wood shop he was alone as he made a new tool for the lathe, grinding off just enough metal with the emery wheel so that it would not vibrate. Everything but the goal of perfect balance faded away.

That—alcoholism on the outside, work on the inside, solitude throughout—seems to have been the story of Finn’s life. He died at Milledgeville, where prisoners were sent when they got too old to work.

In his last years at the camp Finn made a walking stick with meticulous inlay, but instead of the usual abstract pattern, the bits of wood took the form of a snake slithering upwards, as though to strike the hand of the man who held it.

Bill Pitts lives in DeLand, Florida. He is writing a book about a South Georgia work camp during the fifties and sixties. An excerpt will soon be published in Witness. His articles appear regularly inFlorida Gardening magazine and at the blog Simple Spanish Food.