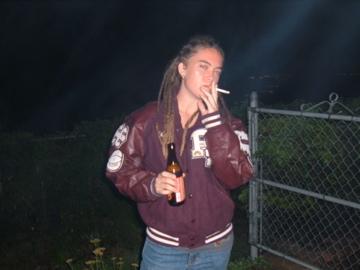 You started smoking when you were twelve. Your first cigarette was one you stole from the pack of Marlboro Ultra Lights sitting on your father’s dresser. He was outside at the time smoking his own cigarette, and so you slipped into his room and stole one because you wanted to know.

You walked up your stairs ever so quietly as he continued to smoke outside, the cigarette hidden in your paw-like hand, and waited with the cigarette in your room for an hour until he went out to have another smoke. You figured that if you smoked the cigarette out of your window while he was smoking his own in the backyard, then he wouldn’t smell the sweet tobacco scent coming from your room, because he would just think the smell was from his own smoke.

That was when you were twelve, and for the next six years until you can buy your own pack, you continue to steal them from your dad. One time, you get gutsy and sneak into his closet where he keeps his carton of cigarettes, and you steel an entire pack, hoping he won’t notice. You figure he doesn’t keep track of how much he smokes. At least you hope he doesn’t.

And when you can’t steal some of his smokes, you walk around your neighborhood picking up discarded butts and squeezing out the few remnants of tobacco from them. You are slightly disgusted when you think about how other people’s saliva might be mixed in with the tobacco, but you do not care. You are craving one that bad. When you collect enough discarded tobacco, you go back to your room and put the tobacco on a pink Post-It note and roll it up, making your own cigarette. The paper tastes horrible, but at least you get that nicotine high.

At fourteen you join the cross country team in high school. And while you do not like to run, your basketball coach says that any freshman who runs cross country will automatically make the team. You like playing basketball, but you aren’t sure you are that good at it, and so you start running in order to confirm your spot on the basketball team.

You do not stop smoking when you start running. In fact, when you are really craving a cigarette but can’t smoke one at home because your mother is there and you are sure she will smell it, you dress yourself in running clothes and tell your mom you are going out for a jog. Really, you have a cigarette and a lighter hidden in your sports bra, and once you get far enough away from your house and into that one small forest of trees on the outskirts of your neighborhood, you squat down and smoke the smoke. Then you run around for twenty minutes to work up a sweat so when you return home your mother won’t be suspicious.

After that first year on the cross country team, you realize that you actually like to run. You like to run so much that you continue to do it all through high school and into college. You even run a marathon your senior year of high school, and you do not stop smoking while training for it.

In college, you will smoke two cigarettes before a long run, then return home from practice and smoke a cigarette on the roof of your dorm with your sweaty running clothes still on. Your lungs feel harsh from the running, and yet you still crave a smoke, wanting to put the toxins back in their place.

Your teammates do not know you smoke, but all of your friends do. They joke that you could run a marathon and have a cigarette break at each mile and still finish in a good time. And while this is a joke, you actually consider doing just that to show the world that smokers can be runners, though you do not know of any other runners who smoke. You know you are a quirk because of your running-smoking habit, and you do not care.

When you run a marathon while in graduate school, you take a pack of smokes with you, because you know you will crave one after you finish. And as you walk away from the finish line and out to the periphery of all of the tents and people milling about recovering from the twenty-six mile run, you light up a cigarette, your runner’s bib still safety-pinned to your shirt, your finisher’s medal still hanging around your neck.

As you approach your thirties, you start running fifty mile races. As you approach your thirties, you start smoking a pack a day. Your mother worries about your lungs. Your friends still think you’re crazy, and you just want another cigarette after you finish running. You want one so bad that, like in college, you smoke one immediately after your run, before you take a shower and change clothes.

You have met many people who started running in order to quit smoking. You have met many smokers who would rather die than have to run. Or, these smokers say they only run when a cop is chasing after them. You like these people. You think they are funny. And when you stand around smoking a cigarette with them, they always ask, How can you smoke and run?

And you do not know how to answer them, because you’ve just always been a smoker and a runner. Runners don’t respect you. Smokers don’t understand you. And all that you know is that you continue to do what you love to do, even if it doesn’t make sense.