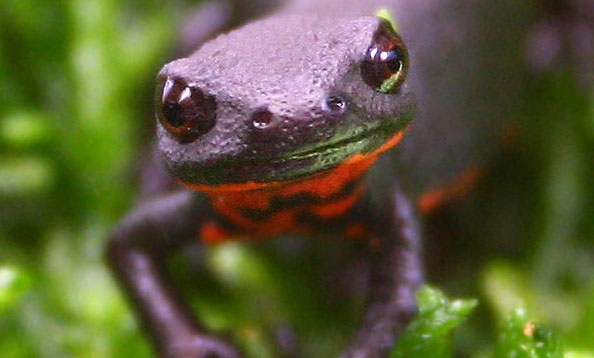 My sister and I had newts when we were young. They were black little squirmy things with brightly colored bellies. My sister’s newt had an orange stomach, while my newt had a red one. We came up with names for these little creatures, mine of which was Fire Lips. Yes, Fire Lips. Fire Lips the newt did not have red lips, but for some reason that is what I wanted to call it. (It is probably the same reason as to why when I was six I laughed hysterically every time after I told this joke I made up: “Why do wrinkle dogs have wrinkles? Because they have no hair!” I’m assuming I was trying to make the connection that old people have wrinkles and no hair, so naturally if a dog has short hair like a Shar Pei, say, then it will also have wrinkles, like a Shar Pei. I know. This doesn’t exactly make sense. But neither did the name Fire Lips).

My sister and I got rid of the newts eventually, or perhaps they died. I do not remember. After the newts, our next pet was a guinea pig. It was a small one with brown fur and eyes that reflected red. Thus, I named it Ruby. I loved Ruby even though I despised cleaning her cage. Little pellets of poop stacked high on top of newspaper and wood chips. But I loved Ruby so much that I became obsessed with the song “Ruby Tuesday” by The Rolling Stones, and even called up an oldies radio station when I was about seven to request that they play the song for me, because my guinea pig was named Ruby.

I gave Ruby away to a friend over fifteen years ago. (And, strangely enough, a week after I gave her away, she died). Much later in college I would befriend a woman who owned a guinea pig. As I went over to my friend’s house for the first time, I realized it had been over fifteen years since I had any contact with a guinea pig. When I got to my friend’s house, I heard her guinea pig grunt and squeal. I had never before heard those noises coming from that kind of animal, because Ruby never said anything to the world. This brought me to understand that she was most likely a deaf guinea pig. I wondered if the red eyes had something to do with it, if red eyes are on the same chromosome as the ability to hear, so if you have a recessive eye gene, maybe it makes you have a no-speaking gene, too. But I failed genetics in college, so I have no idea if this is true.

After Ruby, but before I went to college, my family got an English Bull Terrier—the breed of dog used in those old Bud Light commercials in which they called the dog Spuds Mackenzie. It is also the type of dog Target used for awhile in their commercials. While our English Bull Terrier’s original name was “Briley” my mother quickly renamed her Madonna. She named her after the pop singer because this was the 90’s and my mother thought the dog had a major sassy attitude. When I first met her, I leaned down to pet her, and she circled around me and mounted my back and started humping me.

After nine years with Madonna, my family had to put her down, because she had doggy OCD, and so when she got an insect bite on her tail and one on her hind leg she obsessively itched them with her teeth and couldn’t stop doing it even after she chewed the tip of her tail off, as well as a chunk of her hind leg.

Two years after we put Madonna down, I’m in high school and buy myself a Blue Healer/Australian Shepard mix who I name Athena. She was a smart and loyal dog who taught herself how to masturbate. In college, she would crawl under the coffee table with bongs resting on top of it. My group of friends lounged in a circle around the coffee table and Athena, which made Athena the focal point of our stoned, staring, glassy red eyes. Athena would come into the room and sit in the direct center of our group, basically putting herself on display, as if she had come into the room to show us something. What she showed us was that she was having an orgasm. With her back pressed up against the underside of the glass coffee table, she would start to clean herself, then she quickly found that orgasmic spot on her body and thus started humping her face.

I gave Athena away when I moved to the city, knowing that she would be miserable stuck inside an apartment all day. Instead of having a pet, I acquired a bike to take care of, to keep me company. For the past eleven years I have always navigated the city with my trusty bike. And not just one bike, but many.

There is a long history of me and the bikes I have owned since college, all of which have either been stolen, vandalized, or lost.

Yes, I have had many bikes—which are more like pets to me, really. They are something I take care of, something that I feel a sense of loyalty from, something that is always there for me (except for when they’ve been stolen), and it’s something that enjoys being out in the world with me. My bikes, my pets.

I took a break from bike riding for a year when I lost my favorite blue Schwinn Sprint one night when I was drunk. Due to the four Long Island Ice Teas, three shots of whiskey and god knows how many beers inside of my body, when I tried to ride my bike home from the bar I fell down not once but twice. Somehow understanding in my liquor-hazy mind that I was too drunk to ride home, I locked the bike to a post somewhere in the city, only to wake up the next morning with a terrible hangover and no memory of where I put it. I looked for that bike for a year, then finally gave up and bought another one, which would break down on me in the two days after purchasing it.

In that recent bike-less year I lived in the mountains of Colorado and didn’t need a bike for transportation. But when I moved back into the city a week ago, I got a bike. It is bright red. Today is the first day I rode it, and is also the first time I rode a bike in over a year. And it wasn’t a short ride. In fact, with this new bright red pet of a bike, I rode seven miles to and from my new job. After the fourteen mile round trip bike ride, my crotch was numb and aching.

When I told my mother about my new bike later on that afternoon, she said I needed to name my bike.

“What color is it?” She asked.

“You have to name it Fire Lips! Remember when you named your red newt Fire Lips?” She was laughing a full-body laugh at this memory, as was I, but for a different reason. I agreed with her more than she knew. Considering the two angry-hurting lips of my vagina felt like they were on fire after having ridden the bike fourteen miles, of course Fire Lips was the perfect name for my new pet.

Chelsey Clammer received her MA in Women’s Studies from Loyola University Chicago. She has been published in THIS, The Rumpus, Atticus Review, Sleet, The Coachella Review and Make/shift among many others. She received the Nonfiction Editor’s Pick Award 2012 from both Revolution House and Cobalt, as well as a Pushcart Prize nomination. She is currently finishing up a collection of essays about finding the concept of home in the body, as well as a memoir about sexuality and mental illness. You can read more of her writing at: www.chelseyclammer.com.