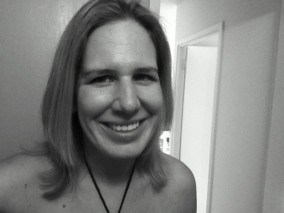 You need a formal introduction to Stinky before he’ll take your bets or even talk to you about the Derby. That way he gets some assurance you’re not out to bust him.

The better you know the basic rules and common strategies of Roller Derby, the better you’ll bet. Go online and look it up. But make sure you look up the Standard American style—none of that Euro-Canadian-let’s-skate-like-pussies-crap.

Stinky has moral reasons for refusing certain people and you can’t argue with a man’s morals.

It helps if, like me, you have a sort of sixth sense about the musculature of a person before she takes off her clothes. You pick the winners easier.

Most of the tips I’m giving you, I learned from Johnny, but don’t go asking him for any more advice, because he’s a son-of-a-bitch and won’t tell you anyway.

Stinky refuses bets from anyone under 15 or from any woman he’s rolling. But don’t you necessarily get in an uproar if he won’t let your lady bet—Stinky counts his real affairs the same as the ones he just imagines or hopes for.

Besides feeling how her ass fits to her thighs and knowing the punch-out power of her tits, it helps to get in the mind of your skater. The more wheel and axle time (if you know what I mean) that you get, the better.

I am tied off now, but I did find much success with the Roller Derby ladies back in my bachelor days. Also, there are weekends that Christine visits her mother in Auburn.

Johnny was always into complicated by-laws and technicalities, the different theories and strategies, but I never bothered learning all that shit.

You want to make sure you pay Stinky in a timely manner. If you want more details, you should watch one of those gangster movies.

Better to go by instinct sometimes. Watch the patterns, feel the rhythms, and trick the girls into giving you all the dirt on each other.

Tell the lovely lady that you lost money in a bet you placed on her. Don’t fuck up the lie by whining.

If the lady derbied well, you can say you thought no one so pretty could skate so mean. If she skitted the dome or otherwise rolled poorly, tell her the refs screwed her or else go on about all the natural talent you sense in her that will develop one of these days and other bullshit.

Also, never discuss bets in line at the concession stand. If Stinky hears you do this, he will cut you off. I do not know why.

As in any get-your-sucker-slicked opportunity, the perfect mix of jokes and compliments will ensure success.

Then, in addition to the obvious benefits of making the old figure eight, you can find out more about the skater and her team.

You may find a brief introduction to the jargon useful. You call the bruisers “elbows” and the speedsters “knees.” The enforcement players you usually refer to as “ankles.” It’s all about the body part, you know? “Uncles” are skaters who fall—both strategically and accidentally. A strategic fall is also a “bunkle” or a “funkle.”

Remember not to mix up Stinky’s dual identities because he’s funny about it. When you talk about the bets, you talk to Stinky. If you want to talk about the weather or the ladies or the opera, you are talking to Clarence.

Christine calls the skaters blockers and jammers and pivots and such, but it’s only because she’s a little stuck up about her glory days on the circuit.

I don’t recommend you get serious with any of the rollers you meet at the Derby. These circuit-pros spend most of their time on the road, so it’s easy enough to wriggle out of the steady thing.

Christine was an obvious exception. Not a one of us that wasn’t in love with her.

If you ever see Christine talking to Johnny, you let me know.

I don’t really know if Stinky hurts people when they owe him money or when he hears they’ve been talking to the wrong people. You just take your chances, I guess.

Once you get serious with a lady, you lose your edge for getting information on the other skaters, because any interest you show brings on helmet hurling hysteria.

Johnny was always the luckiest of us.

You can’t get Christine to skate any more, unless it’s for some charity reunion and then she’ll only do the choreographed performances, not real derby where the ladies go at it.

It doesn’t matter to me—she’s still my best lady.

Of course you can still watch the Roller Derby, even if you don’t bet. Johnny still comes every week even though Stinky won’t be Stinky with him any more.

I find it is best to let the lady shower before you roll-her dirty. You might not mind her hot, smelly stickiness, or you might even enjoy it. It’s likely to make her self-conscious, however, and hamper your screw.

Some guys say Johnny’s got good tips that he sells or even gives away if he likes you. They say the she-skatesters feel sorry for him, tell him everything and also that he’s got a good eye. I only know he’s a son-of-a-bitch and I don’t recommend you trust him like I was dumb enough to do for more than fifteen years.

I don’t know that there’s a whole crime family behind Stinky, but he can definitely hurt you.

It is considered poor taste in our betting world to identify a lady skater by the number printed on her shirt. After all, she is a person, too, I guess.

You’ve got to be careful what you say to Stinky. You start a nasty rumor and maybe someone gets cut off forever. Maybe that’s what you mean to happen.

We use a lady’s name unless she’s not in the program, in which case we nickname her based on her style of play or physical attributes. Examples include Cunt-Freckle, Skele-clipper, and Boobies.

Johnny thinks it’s bad luck to name numbers, period. Least he used to. Who knows what the son-of-a-bitch thinks anymore.

Maybe Johnny getting cut up didn’t occur to you until later.

In the old days Stinky would take bets by numbers but now he’s come over to agree with us that it’s disrespectful.

Whatever you do, don’t tell Christine any of the stuff I say about Johnny.

You might join a pickup game or two of Roller Derby before betting, to get a feel for the sport. Me and some of the guys used to derby in the parking lot of the Penguin Point late at night. You can figure out what makes a winner that way.

You start a rumor, you should know who you’re dealing with—how serious Stinky will take it. But maybe you were pissed and not thinking straight.

You can also get your nose broke when the other team pulls an illegal swoop-loop and then you can bleed all over Johnny’s stepmom’s station wagon.

Some of the rollers may not be disposed to grease your axle no matter how charming and handsome you manage to appear. Shrug it off and move on to the next.

Stinky doesn’t categorize this way, but I like to say there are three different kinds of bets.

Johnny’s always been a lucky son-of-a-bitch.

There’s the basic winner, loser, or spread bets. Boring. But for a beginner to the world of Roller Derby betting, it’s a good place to start.

That’s Johnny over there by the announcer’s booth, by the way. He’s the one with the black socks.

Then there’s player stats. You pick the elbow who’ll get the most stomps or the knee with the most backsides. You can bet on time in the poke-slam or star-passing sequences.

We all know what Stinky’s scorekeepers really do.

The third category is casualties. Stinky takes bets on who will break bones, lose consciousness, bleed the most, or whatever. You can bet that someone will die. You’re smart to make this kind of bet, because the payouts are big and insider tips mean the most.

Just because your old friend is a son-of-a-bitch, you don’t necessarily want him dead.

Telling Stinky anything, it’s like a gamble, you know? You don’t know which one’ll really set him off.

Sometimes you catch Johnny staring at you across the arena. Maybe he misses the bets, but who the hell cares because he’s a son-of-a-bitch, right?

Christine thought I should send Brenda a card or something but Christine is a little nuts. Maybe that’s why you have to keep your eye on her.

Maybe it turns out you’re a lucky son-of-a-bitch, too.

Across the arena, Johnny looks a little angry or maybe like he’s sad and sorry sometimes. You should just look the other way. In fact, you should try not to look at the son-of-a-bitch in the first place.