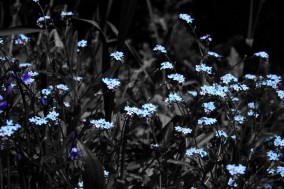 I wrote the first draft of Blue and Black last spring. I had explored the use of color not only to describe emotion but also to explore the contrast of colors when discussing difficult subjects. I have written poems using green and yellow, blue and white and other combinations but found none of them satisfying. When I tried the colors blue and black, I wanted to avoid the cliché of black and blue.

As I wrote and rewrote the poem, I came to appreciate the sound of the two colors, especially the fact that they are one-syllable words. On the prairie, blue skies stretch forever and create wide-open vistas. But the uniquely American music genre, blues, describes hard lives and little hope. It is a symbol of yearning and entrapment. In the context of this poem, black is an omen and but also represents a past not easily forgotten or escaped. The colors in this poem paint a landscape of futility.

I work-shopped the poem several times. Responses varied. Some viewed the poem as silly while others found its eeriness intriguing. But I needed to tighten the stanzas and images and create a “tone and story” to weave through the poem. I rewrote the poem eliminating two stanzas and shifting one stanza from the middle of the poem to the beginning. I varied the use of black and blue in the first two stanzas in an attempt to make the phrasing less predictable. They join, separate and join again.

I explored the use of repetition. I played with variations of wind and moan. I was raised on the prairie. There the wind is a primal force: terrifying, eerie with a “moan” that haunts. Wind blends into moan and moan is a sound people make when in pain. There is a unity between them and a separateness at the same time. I took these two words from the second stanza and reversed their order in the last stanza. I wanted to emphasize how certain memories and consequences continue through a person’s life; how when you return, the memories change and understanding shifts; how the past traps the present.

I also wanted to juxtapose something factual-sounding with the feeling of the eerie. This led me to use phrases such as “there is.” In order to confront the consequences of the first two stanzas, I moved away from this factual tone to the very personal in the third stanza. In the last drafts, I rewrote images that had too much in common with one another.

I wanted the poem to explore intergenerational depression and despair, and I think it does. Although the “fist” image implies some violence, it is the lives of the people in this poem that beat them down. Depression and despair can lead to fury, as well as neglect and a haunting emptiness. As the last two lines read: “I see blue and the wind still moans today and every day.”

LeRoy Sorenson was one of four poetry participants in the 2009—2010 Loft Mentor Series at the Loft Literary Center in Minneapolis, MN, and a semi-finalist for the Pablo Neruda Prize for Poetry. His poetry has appeared in Nimrod, Cold Mountain Review and other journals.

Mr. Sorenson published his poetry collection, Forty Miles North of Nowhere, with Main Street Rag. Finishing Line Press will publish his chapbook Railman’s Son, in March 2021. He won The Tishman Review 2019 Edna St. Vincent Millay Prize for Poetry. He was also a finalist in Naugatuck River Review’s annual poetry contest and a semifinalist in the Nimrod International Journal of Prose and Poetry’s Pablo Neruda Prize in Poetry. His work has appeared or will appear in The American Journal of Poetry, the Atlanta Review, The Cider Press Review, Crab Orchard Review, Comstock Review, The Sow’s Ear Poetry Review and other journals. He lives in St. Paul, MN.