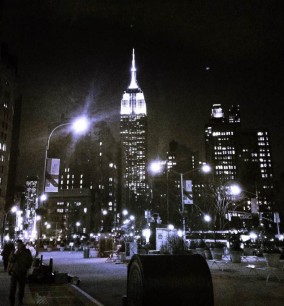 It’s rare that we were allowed, nay, released into the late afternoon sun. I’d almost forgotten what it looked like. Lunch is generally taken by those in socially agreeable methods of employment (not exclusively on Madison Avenue) between the hours of 12:30 and 1:30 pm. At this point, women in impossibly high heels and wool coats with furry hood halos traipse down the city side walks, the flash of a lit cigarette or oversized diamond -– or both -– on one hand, the other tucked neatly into a pocket, an overpriced purse, or the crook of the arm of an inflated very important businessperson. In the one decent lunch establishment, the charade continues. High pitched squeaks of conversation demand attention from male counterparts, who laugh loudly like a sober frat party as they eye the girls out of the corners of their eyes. The smell of mid-priced cologne and cigarettes mixes sickeningly with the garlic from the hot food bar and tang from whatever the chefs are whipping up for those who eat. I never eat here anymore. This place gives me stomachaches, so I refused to try its fare again, even though it’s the only place in the vicinity not overrun by tourists or serving up science fiction-like fast food.

But I don’t go out to lunch at this time. I head out to walk around 2 pm when it’s quieter and the only people sprinkled like pepper under the building awnings are the smokers. I don’t blame them. If I could escape every five minutes on the hour, I would, and stand and chat and smoke and chat some more. There’s no one to impress at 2 pm and the smokers know that. They just try to escape the hell in which they have found themselves, fueled by the fires of rent, happy hour, nice shoes, and New York City living. Madison Avenue. We’re all mad here, and fucked by the machine that makes us insane with these unnatural cubicles and misdirected hostility. Godspeed to those who try to be happy; everyone else will suck this poison from your soul and spit it out, wiping their shoes in it for good measure. Coach shoes, I might add. The occasional pair of Louboutin. But everyone’s miserable and wants everyone else to be so too. They married for greed, are desperate and lost in that two hour suburban commute, or go back home, alone, to that decently-sized overpriced apartment after too many martinis at that social event where they didn’t meet that husband to rescue them from this life.

So I leave Madison Avenue, when I can. I walk to “Curry Hill” and feel like a foreigner, even though two blocks away there are beautiful old brownstones into which I sometimes peer. A chandelier here, a glamorous cat there. It all depends on the occupants and their lifestyle. I fancy what it must cost to own such a home, but it’s not for me. I go where I feel like I belong, even though I don’t, because this sort of exemplifies my entire experience of life itself. Women in saris pass by, their heads covered and they speak in the warm accented English I associate with home, although I’ve never been to India. One of my childhood friends was Indian –- Satinder, was her name -– and her dad owned the “VG” at the end of the street as we called it. I have no idea why. It was a convenience store in a convenient spot, selling papers and sweets and tins of food and soda and a host of unhealthy yet delightful things. Satinder had a nose ring and a slight accent and went to the high school which I was set to attend, rather than the one closer in my neighborhood. Our parents agreed that it wasn’t good for us, this closer school, for our education, and because the crowd was generally rougher, drug-addled and would end up at 16, pregnant by the boy across the street, then collecting government money and living in council housing as the whole habitual cycle started again. Satinder was the one with whom I smoked my first cigarette and dutifully pretended not to cough.

Here, in Curry Hill, the air smells like spice and love and things cooking with care; like my home. The few blocks of stores are inviting, comfortable and even though I just ate, I’m ready to eat again. I like visiting the spice shops, looking at all the wonderful blends, the kinds of curry one can make from places I will never visit. My favorite place I save for last; the owner always offers me an Indian sweet -– burfi, mostly -– and I feel obligated to make a purchase, but sometimes I don’t; I just come to browse and eye the twenty-five dollar pestle and mortar that I’ll purchase before I leave. One day, he offered up a piece of sticky-sweet gulab jamun, it’s rose scent tickling the back of my throat as I walked back to Madison Avenue until it was overpowered by car exhaust fumes and the chattered garble of tourist’s languages mixing and blending and making one huge mess as they gawped at the capitalistic brilliance of the Empire State Building.

Some days, I don’t get to go anywhere and burst out of the office building like a crazed school kid finally allowed out at recess. I pace the streets not looking up but just in front, as my legs ache with inactivity and anger. Ten minutes in the cold air is not enough to clear out my head, and the dirty unnatural emotions are not scoured away even though I walk up seven flights of stairs to reenter that ice cave of so-called productivity. I haven’t showered today. I don’t see the point.

Now, it is early afternoon and I’m outside, not taking lunch. I’m free. I’m heavy with fatigue and  from being forced into a cramped position for hours upon end, of dealing with barked commands, as I’m pushed from behind out of the trenches, alone, to the amusement of my companions. I like beautiful things, and on Madison Avnue, days go by without seeing beauty. I walk, scanning the afternoon faces of passers by, looking for the unexpected in the slick grey concrete, but these collectively varying shades of grey don’t offer any kind of contrast. I’m wrapped in newsprint. I’m lost.

Park Avenue’s residential streets are wider and better, and there is a feeling of expanse, without being in the wide open. I remember to look up, to look away from another British collective walking past; not tourists. They and the Russians and the Chinese own this city now, despite underground protests that they most certainly do not. I know for a fact that the smokers, the workers, the chattering ex-sorority girls and puffed up finance men don’t own the city, but they think they do, rolling into credit card debt to create the illusion of possession. But it’s the afternoon and no one is responsible for anything; so I gaze up and hope to see the sun, but instead, there’s the Chrysler Building and my heart aches for F. Scott Fitzgerald’s city –- the place of flappers and glamor and beauty and Art Deco archness. The sun highlights the metal detailing at the structure’s very top, and for a moment I travel in time, in a whirl of gimlets and cigarette holders, and beaded gowns and bobbed haircuts. And then I’m back and I wonder if anyone then was really happy, either, or our collective memory has shaped the past into a staged image of better style and better times, illuminated by time, inaccessible and perfect.

Miriam Lamey is an Astoria, New York-based writer and yoga teacher trainee under the 200 Hour program at Sacred Sounds Yoga to be completed in February, 2015. She strives to be open and attentive to the everyday, using life’s beauty and tragedy as inspiration for her writing and yoga practice. She’s an avid Ashtanga practitioner, also partial to a great new album, excellent bottle of wine, a good Manhattan, and attentively-cooked meal.  Follow her on Twitter @mirseven and on Instagram.  Read more on her blog atwww.miriamlamey.com. 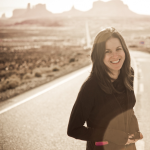 Miriam Lamey is an Pittsburgh-based writer and yoga teacher. She strives to be open and attentive to the everyday, writing with vulnerability and honesty - things she also continually explores in her personal ashtanga yoga practice. She loves the discovery and adventure of being and aims to render experience via prose. Miriam's head is also turned by thoughtful and poignant music, an excellent bottle of wine, well-crafted cocktails, delicious food, the wide outdoors, and F. Scott Fitzgerald. She is grateful to have so much support and love in her life. Her photography and insights are on Instagram under Ldym_07. Read more on her blog at www.miriamlamey.com