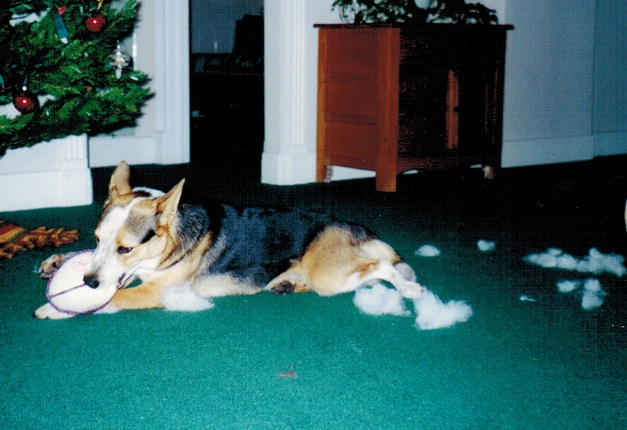 When I informed my mother I had gotten my period for the first time (age 11), her and my father went to the store to buy me pads. When they got home, my dad was carrying a plastic bag full of three different kinds of pads (mini, regular, overnight/super). Then he chucked the bag at my face and said “Catch!”

When I saw my redish-brown spotted underwear that day, I did not have the paranoid reaction that I was internally bleeding and/or dying. No, I knew what a period was, because four years earlier my mother had explained to me that little fact of feminine nature. She did this because my older sister had gotten her’s earlier that day. A few months after this informative discussion, I saw a used pad in the trashcan of the bathroom my sister and I shared, and when I saw it I ran upstairs and said “Mom! Kate’s on her period. So if she acts bitchy that’s why.” I felt very helpful.

Though I don’t actually remember if I said “bitchy”–I was, after all, only seven at the time. Though by then I had already flipped off my third grade teacher, Mrs. Buttons, in class. Luckily she didn’t see it. So with such a wide and mature set of vocabulary/gestures maybe it was “bitchy” that I said, or at least something to that affect.

Twenty years later I write an essay about bisexuality. The structure of the essay is organized by step-by-step instructions on how to insert a tampon. (“Unwrap your desire.” And, “Once I unwrapped my heterosexuality facade, I was ready to plunge into sleeping with women.” And, “While I was fully immersed in my lesbian identity, I still felt something dangling from me, some other sort of desire, perhaps, just waiting to pull me out of my lesbianism.” And etc.) There are diagrams. When I tell my sister about this essay, she asks if mom ever helped me to put in a tampon.

“Uh-huh,” my sister says, a mixture of disgust, annoyance and disbelief permeating from those two syllables.

“Ulgh,” is the only response I can come up with. Because my ability to use my words in reaction to this piece of information vanishes as an image of the situation consumes my brain.

When Kate tells me this over the phone, I can hear her girlfriend/my best friend in the background, telling her a story. Kate relates the story to me: “Sabrina said the first time she put in a tampon she put the whole thing in there—wrapper and all—and told her mother it felt weird.”

I do not remember when I started using tampons. Though I do remember a girl on my high school basketball team having to use the tweezers from our First Aid kit to pull out her tampon. She had lost the string somewhere up in there.

And also in high school, one of my cross country teammates was talking one day about how she hated to run with a pad on. Why don’t you use tampons? Our coach (female) asked. To which the woman responded, I can never get them in. To which our coach responded, Honey, just pretend it’s your boyfriend.

Up until a few months ago, I hadn’t worn a tampon in five years. Instead, I was using the Diva Cup—which is essentially a latex shot glass with a stem on the base of it. It catches the blood for you. Every time I took the Diva Cup out of me, though, it made a sucking sound. Which is a weird sound to hear if you are, say, in a bathroom stall. This suctioning quality is why a few months ago I had to start using tampons again, because when I got my IUD inserted the doctor said my Diva Cup could possibly suck the IUD out of my uterus.

I had a friend once who used Moon Pads—the re-usable cloth pads you have to wash out after every use. Her girlfriend also used them, and so once a month there was a bucket of bleach sitting in the bathtub which had stained Mood Pads floating in it.

And while I have so many memories about other people’s menstruation habits/stories, I still have no recollection of my first tampon use.

Funny story: once when I was emptying the Diva Cup of my clots of blood, I somehow managed to dip the tip of one of my very long dreadlocks into the cup. It took a few days to get the red out.

Thankfully I have no embarrassing stories about brown stains on white pants, or leaving a puddle of blood in a chair when I left the room to go put in a tampon.

But I have felt embarrassed for some of the curious straight women who have asked me “Have ever taken out a woman’s tampon with your teeth?” Where do straight chicks get these ideas from? No. I have never done that. I already floss on a semi-regular basis, thank you very much.

Though my dog did have the habit of fetching used tampons from the trashcan and ripping them apart/devouring them. Evidence of this was the light blue strings and puffs of red and/or brown cotton scattered around the floor. Because of this, when I had my period I never walked around my house naked for fear that my dog would run up to me and try to yank out my tampon.

I did not want this to be a lesson learned. Just like how I never asked my mom for help while putting in a tampon, because I didn’t want her to give me a hands-on lesson. Because while female advice on these sorts of things can be useful, some stuff you just gotta learn on your own.