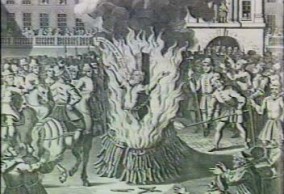 “This is the second time I have had the pleasure of being burned while on earth. I hope it means I shall pass through the fires of purgatory unscathed.”

James Joyce, after the New York post office burned 500 copies of Ulysses in 1922, the sequel to the Dubliners’ burn.

Before the arrival of Bertelsmann, Hachette and the four other international Publishing Super PACs with their calculators and shredders, literature was in the grip of political and papal pyromaniacs. Foreshadowing the fate of Slaughterhouse-Five, Of Mice and Men, The Satanic Verses, Harry Potter and many more, book burnings had become all the rage worldwide.

In the West, the Roman emperor Jovian Fahrenheit 451ed the Library at Antioch, inflaming the pre-Islamics; then, his Christian successor, Theodosius, lit up the Library at Alexandria. Meanwhile, in the East, Emperor Qin Shi Huang torched every title on the Chinese philosophy bestseller list (dying himself only after swallowing mercury which his wizards said would give him immortal life guarded by his 6,000 terra cotta soldiers). Later, Mao Tse-Tung, a retired librarian become Cultural Revolution director, was flattered to be compared to Qin Shi. “He buried four hundred-sixty scholars alive, we have buried forty-six thousand scholars alive,” the Blessed Leader boasted to the genre readers who were left. “We have surpassed Qin Shi Huang a hundredfold!”[1]

Book arson climaxed with the Grand Inquisitor, Torquemada, and his Italian counterpart, Savonarola. The Spanish Dominican, a closet Jew, torched the Talmud and everything else in Arabic. The Florentine Dominican – author of The Downfall of the World – expanded his own carbon imprint with Boccaccio’s Decameron, plus Ovid’s oeurve, plus all other extra-literary decadences from cosmetics to playing cards. Savonarola called his global warming campaign The Bonfire of the Vanities. The title was later pirated by Tom Wolfe whose early ambition it was “to blow up” the most vainglorious publication of the New World: The New Yorker magazine.

Whereas the southern dandy’s bonfire led him to ever-greater publishing coups in the postmodern world, Savonarola’s got him excommunicated then grilled by Pope Alex VI, the Borgia Mafia godfather. The pontiff’s attitude-adjustors racked a confession out of Savonarola, but spared his right hand so he could sign his John Hancock. Before being led in shackles to his own bonfire, the zealot jotted down his last poem, Miserere Mei — Miserable Me. The roasting of Savonarola had an SRO audience of the Florentine bloggers he hadn’t yet had an opportunity to unfollow or unfriend, much less unpublish. “The one who wanted to burn me is now himself put to the flames!” enthused one Jacopo Nardi.

Other roasted writers are too numerous to name. But their variety was impressive. The Renaissance’s first women’s libber, Hypatia, was lit up by a band of monks under the command of Peter the Reader, the pope’s censor. The Swiss YA book critic, Simeon Uriel Freudenberger, was thrown on the pyre for arguing that William Tell never shot an apple off his son’s head. Jacopo Bonfadio, the 16th century Italian Dominic Dunne who penned a tell-all on the murderous Genoese bluebloods, was beheaded then his torso torched for sodomy.

The Swiss soon devised a Cap-and-Trade two-bards-with-one-stone literary recycling m.o.: burn the books with the author. Michael Servetus, the freelance religious and drug blogger, was the debut sacrifice. The Spaniard was cooked on a slush pile of his bestseller – On the Errors of the Trinity – with one strapped to his leg for kindling. He had committed the unpardonable heresy of calling Christ “the eternal Son of God,” rather than “the Son of the eternal God.” Which even pissed off his Protestant colleague, Calvin. Adding insult to injury, Michael red-penciled John’s own gospel and overnighted the corrected copy to Switzerland. The Calvinist was apoplectic.

“Servetus has just sent me a long volume of his ravings,” he wrote a friend. He added that if his rival ever came to Geneva, “I will never permit him to depart alive!”

Troubled by the case of Servetus, John Milton wrote in “Areopagitica,” a defense of free speech: “Who kills a man kills a reasonable creature, God’s image; but he who destroys a good book, kills reason itself, kills the image of God.” But after his Puritan protector, Oliver Cromwell, the bane of Irish writers, died along with the Reformation, Milton was imprisoned and “Areopagitica” consigned to flames.

Also destroyed was his “Eikonoklastes” (The Iconoclast). Parliament had commissioned Milton to write this essay rebutting King Charles I’s memoir “Eikon Basilike” (Royal Portrait), an apology for monarchal excesses. After the king’s essay outsold Milton’s, Cromwell had him tried for treason and beheaded. But the good Puritan Lord Protector allowed his majesty’s head to be sewed back on to avoid separation anxiety and so his son could pay his respects.

When Cromwell died of malaria, Charles II reclaimed his father’s throne, exhumed the Puritan pamphleteer, decapitated him posthumously, and displayed his head on a 20-foot pike above Westminster Hall. Here it remained for the next three decades (except for a brief removal for roof maintenance in 1781) glowering at Parliamentarian scribes scurrying through the Great Plague of London.

Spared both the Black Death and the fate of his benefactor, Milton went on to knock Dante himself off the bestseller list with Paradise Lost. The title of the blockbuster took on additional significance for the blind poet when his publisher paid him £10 for all ten volumes that had cost him his eyesight and, very nearly, his mind. He didn’t get a raise for its sunnier sequel, Paradise Regained, and soon died of kidney failure while Cromwell’s head was still a Halloween exhibit on the roof.

Finally, taking the cake, there was the sobering case of Theodore Reinking, the Dane who denounced King Christian IV for losing the Thirty Years’ War to Sweden. The crown generously gave him a choice: part with your head, or eat your book page by page. Reinking chose the latter. Again showing Scandinavian sympathy, his jailors provided him French sauce so the manuscript would go down without requiring a Heimlich.[2]

The rumination was reprised four centuries later when Steinbeck’s Irish Setter, Toby, ate the first draft of Of Mice and Men. Said the understanding author who spent the next two months rewriting his novel: “I have promoted Toby-dog to be lieutenant-colonel in charge of literature. But, as for the unpredictable literary enthusiasms of this country, I have little faith in them.”[3]