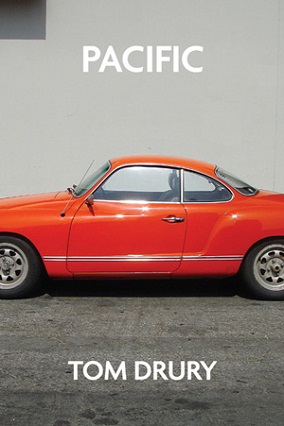 In Pacific, Tom Drury revisits the community of Grouse County, the setting of his landmark debut, The End of Vandalism. When fourteen-year-old Micah Darling travels to Los Angeles to reunite with the mother who abandoned him seven years ago, he finds himself out of his league in a land of magical freedom. Back in the Midwest, an ethereal young woman comes to Stone City on a mission that will unsettle the lives of everyone she meets—including Micah’s half-sister, Lyris, and his father, Tiny, a petty thief. An investigation into the stranger’s identity uncovers a darkly disturbed life, as parallel narratives of the comic and tragic, the mysterious and quotidian, unfold in both the country and the city.

“Reading Pacific makes me once again fall in love with Drury’s words, and his perception of a world that is full of dangers and passions and mysteries and graces.” —Yiyun Li

“A beautiful book of quiet power that deserves recognition as a contemporary classic, with Drury one of our living masters.” —McSweeney’s Recommends

“Pacific is a terrific book, and a strange one, as strange as the world and the great literature that helps us make our way through it.”—Daniel Handler, New York Times Book Review
“Many in Pacific make mistakes, many lose things they think they could never stand to lose, and yet on they go in the rough old world, and you with them, peaceful at heart..”—Leland de la Durantaye, Los Angeles Review of Books

“Some of the sharpest dialogue I’ve read in some time. . . . On the surface, Pacific is a disarmingly plain tale about people managing loss. But look closer, and you’ll see it’s as deep as the ocean it’s named after.”—Don Waters, San Francisco Chronicle Tom Drury was born in Iowa in 1956. The recipient of a Guggenheim Fellowship, Drury has published short fiction and essays in The New Yorker, A Public Space, Ploughshares, Granta, The Mississippi Review, The New York Times Magazine, and Tricycle: The Buddhist Review. His novels have been translated into German, Spanish, and French. “Path Lights,” a story Drury published in The New Yorker, was made into a short film starring John Hawkes and Robin Weigert and directed by Zachary Sluser. The film debuted on David Lynch Foundation Television and played in film festivals around the world. In addition to Iowa, Drury has lived in Massachusetts, Connecticut, Florida, and California. He currently lives in Brooklyn and is published by Grove Press.