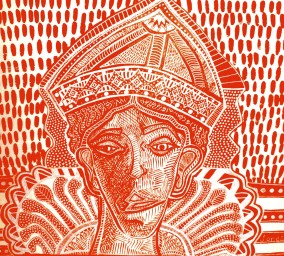 MB Jones, an artist whose works appear in the Eckleburg Gallery, discusses his art, in the context of history and modernity. Click here to see his paintings.

Sure, there is an academic tradition and dogma when it comes to reading a painting. University libraries are full with volumes of scholars battling over their reign as supreme arbiters for defining what is or isn’t art. Although all this may be necessary for the documentation of art history, the traditional academic fascism of how to interpret art is no longer relevant, having gone extinct sometime in the second millennium AD. Scholars are awakening to the fact that what has been termed art or art history is a semantic mistake that defines art by the narrow tradition of ‘classical’ Greco-Roman sculpture and European painting. With the advent of the Internet, modern travel, and general globalization, the public has emerged from the dark ages of information. The audience can experience art created by people of every cultural and socio-economic background. In short, exclusive rules on how to interpret art are superfluous. An adult can act as though a child by unknowingly looking at the color painted onto a large canvas and be moved to emotion, or just a smile.

Color is everything: it is the line, the expression of form, the representation of light, it is space or the absence of space, and finally it combines to give the painting its identity that connects it to the physical world. In the case of my own work, my paintings are a place where colors are participating in a drama, interacting with one another, complementing and fighting. The articulation of the relationships between the colors stimulates the viewer’s eye by creating movement beyond the solid form of the painting. This velocity of color works to signify the subject, atmosphere, and identity of the painting. The history of painting is the history of color, the way it takes form to depict the subjects and emotions from the time period when it was created.

From Descartes to the modern age, philosophers have recognized the advent of written language as the starting point of human civilization: it is what differentiates us from animals.[1] What is left then that connects the modern consciousness to our pre-history from before the birth of civilization? Before linguistic signs, our ancestors communicated with painting, as is exemplified by various prehistoric cave paintings. A recent study that juxtaposes the Neolithic Wadi Sora cave painting, “Cave of the Swimmer,” with early ‘Egyptian’ visual art depicts this transition. Both illustrations are composed of similar images and symbols; however, the only difference is that the Egyptian illustration included hieroglyphic text.[2]

Egyptian hieroglyphs are considered one of the earliest forms of writing in the world and in ancient Egypt,few major inscriptions lacked a referring image.[3] Art is the original form of visual communication passed down from our prehistoric ancestors, and perhaps this is the reason why it continues to have such a strong effect on modern consciousness.

In the same way that art connects humans with their prehistoric ancestors, it also connects individuals with their childhood. As children, most people have had the experience of drawing or coloring unabashedly and creating art. Later, as they become socialized adults, most stop drawing and expressing themselves visually, for fear of creating ‘bad’ art. If they were lucky enough to keep the drawings of their childhood they would perhaps look on them and laugh, judging how they are aesthetically bad. In my case, my grandfather was a painter and encouraged my naive ‘scribblings’ as a child. Now as an adult artist, and an audience for other’s art, somehow the visual stimulation of painting connects me to this childhood experience and my grandfather. In the same sense, one of the most enjoyable aspects of being an artist is to watch this inner time-travel occur in others who look at my art. When I exhibit my work, I am able to experience how each individual appreciates a different aspect of my work, and how it connects with something deep inside their own emotions.

This new world is what separates the current artist from those of the past. Although painting is a tradition with origins from prehistory, we are now are working in the information age, where artists from everywhere can communicate with ease, exchange ideas, and travel the world casually, unlike any previous generation. In the past three years, I have worked in art studios in places such as South Korea, Laos, the Netherlands, and the United States. In each place, I absorbed the cultural and artistic traditions, which is reflected in my art. My painting is a product of the developments of the technological age and the environment of the global community in which I live.


MB Jones (1981-) Is a visual artist originally from western Massachusetts. While the style of his art is rooted in the American folk art tradition, his work also reflects his travels and past experiences living and working in art studios in the Netherlands, S. Korea, and most recently Laos. His work has been exhibited in commercial galleries and art fairs, yet he also embodies the underground DIY (do it yourself) movement in that he creates shows in unique places all over the world, exposing his art to new and unsuspecting audiences.

MB Jones (1981-) Is a visual artist originally from western Massachusetts. While the style of his art is rooted in the American folk art tradition, his work also reflects his travels and past experiences living and working in art studios in the Netherlands, S. Korea, and most recently Laos. His work has been exhibited in commercial galleries and art fairs, yet he also embodies the underground DIY (do it yourself) movement in that he creates shows in unique places all over the world, exposing his art to new and unsuspecting audiences.