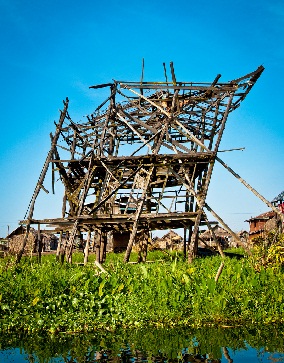 In 1977 he had a stroke in his home. The jarred electrical currents made his body crash down to the mountain cabin floorboards. The stroke did not cripple him, but it did make him take his body to a different home, one in an actual city, with a hospital really nearby. This was when he was fifty-six. And while he made a new home in a different city, he kept the cabin in the mountains, his favorite house, his home.

In 2011, at age ninety, he returns to the mountains, alone, as he has returned to this home many times throughout the years to repair the slowly aging parts of it. The weathered deck, the creaking door, the old wood burner cracking at its core. His body, like the house, is older, an aged home. His body has needed its own minor repairs: hearing aids, dental work, a healthier diet. He takes care of his body that is perhaps his most beloved home, a fact he perhaps does not realize.

In 2011 with this aged body, in this old cabin, in this small mountain town, he fixes the water, alone. He is doing his repairs, and his body remembers when it briefly failed him at age fifty-six. How he had a stroke back then. Then, here, now, crack, another electrical current jolts his body. Yes, another stroke. Now. Right now. He is having another stroke, right now. Now, at age ninety his body becomes a body remembering that first stroke, relives it again decades later, and it cripples him this time in his cabin. It makes the right side of his body pause. The pause will last between the time it strikes his aged body down, to when he dies three weeks later in Penrose Hospital, room 609.

Immediately after the stroke he will spend seventeen hours alone, on the floor of his home. He will be paralyzed in his mountain cabin, hearing the phone ring down the hall, waiting for someone to come and lift his fallen body out of the house. Now as he lies in the bed at Penrose Hospital, room 609, his body is unable to eat, unable to recover from the stroke. The home that is his body is looking less like a home, and more like a skeleton—the frame of a house, all rafters and 2×4’s. The home begins to fall down, the scaffolding that used to keep it a sturdy home, crumbles. He crumbles. For the first few days in the hospital, his body rose and fell with the machines used to keep it sturdy before they, too, came down. His body stripped of life support. Now he sees his body is its own machine—outdated, needing repairs, the soft wear and tear on his mind. But his body, like his heart that caused the stroke, eventually corrodes, erodes. The legs go first. Knees begin to look more like elbows. The door begins to close on his mind. His eyes, the window panes, fog over, become milky and clouded. The water leaks. The plumbing, uncontrollable. His home, his body, becomes a site of destruction. The demolition of a house. There is the cemented tongue, the power-outaged brain, the disintegrating insulation, the frame of the visible ribs that crack under the weight of age. The floorboards of his elderly bones groan.

Chelsey Clammer received her MA in Women’s Studies from Loyola University Chicago, and is currently enrolled in the Rainier Writing Workshop MFA program. She has been published in The Rumpus, Atticus Review, and The Nervous Breakdown among many others, and has an essay forthcoming in the South Loop Review. She is an award-winning and Pushcart Prize nominated essayist. Clammer is the Managing Editor and Nonfiction Editor for The Doctor T.J. Eckleburg Review, as well as a columnist and workshop instructor for the journal. She is also the Nonfiction Editor for The Dying Goose. Her first collection of essays, There is Nothing Else to See Here, is forthcoming from The Lit Pub, Fall 2014. You can read more of her writing at: www.chelseyclammer.com.