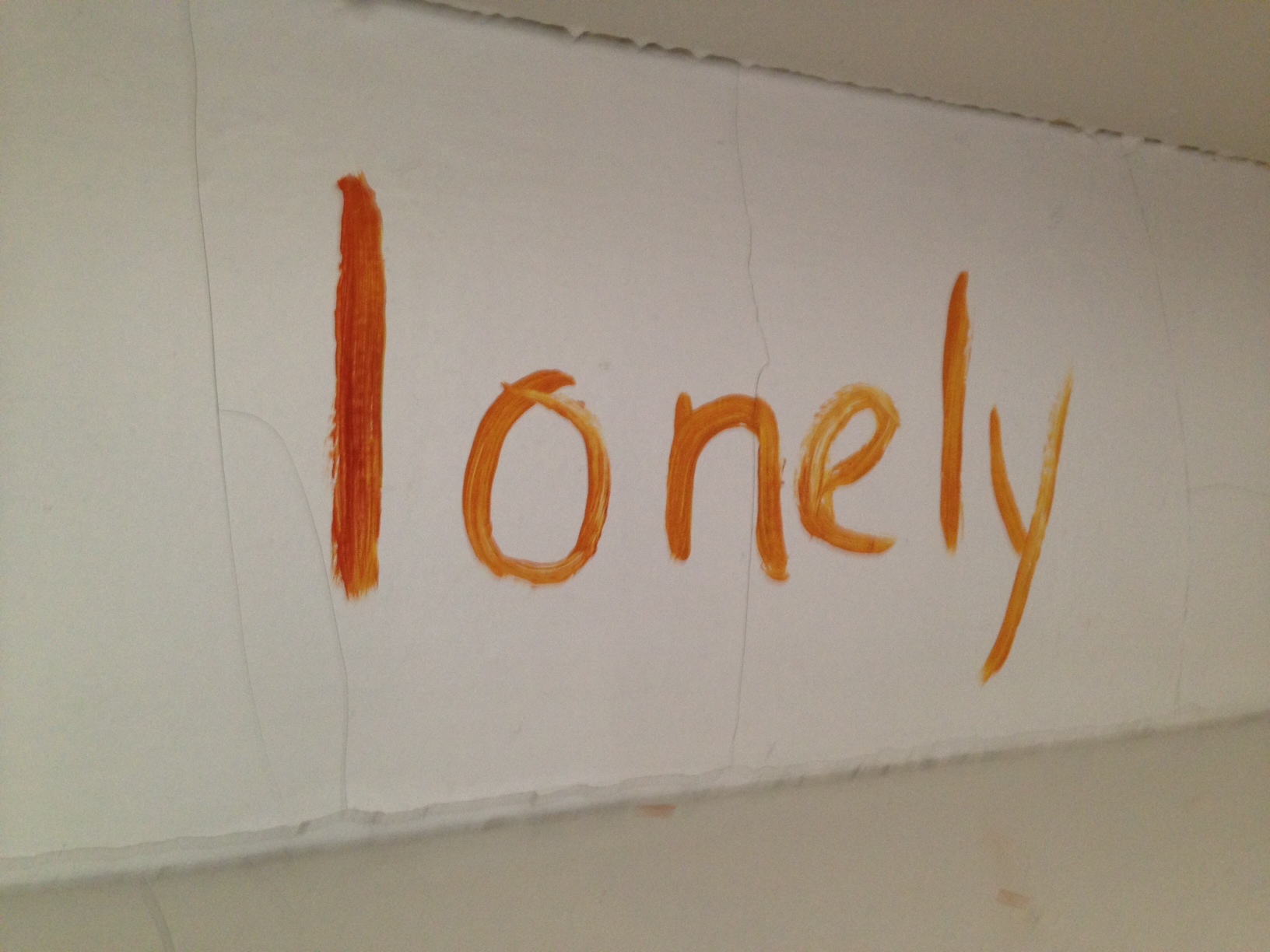 In a series of seven sessions, invited artists and writers, along with interested members of the public, collaborate in writing on the interior of an out-of-use house on Governors Island.  Writing On It All enacts the physical as well as social nature of writing, with a materialist twist on contemporary conceptual art practice. Just as writers are embodied, so do we write with concrete tools, in and from particular locations with particular histories and functions.  Mindful of this materiality, Writing On It All takes place in an early 20th-Century house that used to serve as senior officer housing when Governors Island was a military base.

Writing On It All puts these ideas and this history into play with a number of poets and visual thinkers, a graffiti artist, and a movement improviser, who will facilitate sessions designed to invite different forms of engagement with the empty old house, from listening to dancing to a range of collaborative writing activities. The project foregrounds process over product, which means that we don’t know quite what to expect, and that our collective focus is on acts of writing rather than on the texts we produce – nevertheless, the house will be available for viewing after each session. Ultimately, the texts themselves are ephemeral; they will be painted over, rinsed or sanded off, and the house restored to its original condition, at the beginning of July.

Eckleburg wants to thank Writing on It All‘s Project Director, Alexandra Chasin, for talking with us about her intermedia project and innovative writing.

Rae Bryant: Writing On It All speaks of “materiality” as being foundational to the project, the idea that writers come “from particular locations with particular histories and functions.” How did this early 20th-century home become part of the materiality for this project?

Alexandra Chasin: Writing, as an act engaged by billions of people every day, takes place everywhere.  This project, which investigates how writing is related to a particular location, could take place anywhere.  We happened into this particular building – 6B Nolan Park – through the angelic intervention of David Belt, a NYC developer who specializes in reuse and conversion.  I described to him my fantasy of writing all over a house and David told me that Governors Islands had empty houses that they made available for art projects, thus putting us on the road, or should I say ferry, to Nolan Park.

Governors Island functioned as a military base for almost 200 years, and for many decades 6B served as senior officers’ quarters.  Governors Island shares New York Harbor with Ellis Island and the Statue of Liberty, figures of haven and asylum (whatever the experience of asylum-seekers and immigrants may have been once they reached the mainland).  The new Freedom Tower, now in its last phases of construction, is visible from the island; the towers of southern Manhattan rise up strikingly behind the pastoral greensward of Nolan Park.  This location evokes a range of associations, based on its history, its uses, and its features.

So the location is partly arbitrary, definitely serendipitous, and richly evocative.

Like any other location, the ghosts who live there, as well as the ghosts we bring, animate the writing that takes place there.  Writing On It All is designed to dramatize that dynamic.

RB: Can you tell us a little more about the “ephemeral” quality? What does it mean to a writer and artist to create within temporary spaces?

AC: With some arts, particularly dance and music, their ephemerality is more obvious.  The sounds and/or movements cease.  Text is often imagined as ceaseless, eternal, as though our technologies of reading – the e-reader, the book, the scroll, the tablet – are arbitrary vessels of pure thought. Those devices are our compromise with pure thought; we must bring it down to material form in order to distribute or receive it.

Text is also ephemeral, but on a different order of time.  Not only will our material devices, even the very durable tablet, degrade over time, our ideas too will pass.  I don’t mean this facetiously.  I’m not saying there might not be effects and traces.  I’m saying, in the long run, nothing. As with the question of materiality, Writing On It All dramatizes this ephemeral quality of texts:  at the beginning of July, we will restore the house to its original condition.

Maybe the absence of publication will create a sense of freedom, anxiety, humor?  Maybe the writers will answer this in June.

RB: The New School is a beacon of experimental expression for students nationally and globally, and we all thank New School and you for it. What more do you see for written innovation? Where else might we go as innovative writers/artists?

AC: I don’t think of innovation as a moral or aesthetic virtue, but rather as a response to new opportunities, whether engaged willingly or unwillingly.  For those writers happy working in received forms and genres, more power to them – for the most part, they’re not hurting anybody, on the contrary.  It’s not actually us or them.

Sometimes I’m afraid we overvalue innovation – literary canons are rosters of perceived innovators, and innovation as a value links with a particular work ethic, certain demographics.  I may subscribe personally to this ethic J but that’s probably because I benefit from it and because of my demographic situation.  Wouldn’t it be great to imagine institutions that could somehow enable and reward pleasure in writing, the freedom to write, access to education in writing, access to writing without education?

Okay, to come down off the soapbox, I think formal innovation tends to ride into town with cultural changes – who knows which causes which – and there are particular changes in play right now – and therefore particular places I would expect to see innovation.  Though it can crop up in the bathtub too.

Certainly we are living in a moment of proliferating media technologies.  What writing is and means and does can – and must – be invented again and again in an age of digital reproduction, which is infinite and virtually cost-free.  Who can write, and who does changes when technological regimes change.

Other kinds of change that I think are likely to spur, and manifest in, formal innovation in writing include:  changes in intellectual property law – inevitable –

new forms of energy production, harnessing, and distribution, and new habits of energy consumption – inevitable – changes to the environment and climate.  If only I thought property relations, race relations, and gender relations were in similar flux, or that military action would cease.

For my money, just now, the conceptual field seems to be producing an interesting diversity of crops.  I think Of Writing On It All as conceptual to the extent that it is designed as an action-based experiment rather than an aesthetic object, rather than a holder of meaning.

We talked earlier about the materiality of texts.  And writers are material, by virtue of having bodies, and our gestures of writing contrary to our myth about the transcendence of the mind of the writer.  From firing neurons to manipulating keys, stylus, pencil, pens, to giving dictation, “writing” is a physical act.  Writing On It All is an exercise in hypermateriality, in apparent contradistinction to the dematerialization that digitization seems to imply.  The conceptual field hosts both of tendencies toward innovation, as well as many others.

RB: Your work, in particular—Brief, Kissed By—functions not only as artistic gems but also as leading innovative expressions. And you teach this innovation to your students. Why are innovative forms so important in our creative writing classrooms? How might one convince a staunch traditionalist writer/professor of innovative forms’ necessities in the classroom and that To the Lighthouse—Virginia Woolf we love you—is no longer at the edges of this innovation?

AC: To write diversely is to expand one’s technical repertoire.  Why wouldn’t any writer benefit from a carefully wrought set of tools, to dust off the old metaphor?  Students, theoretically the most plastic of writers, benefit, I believe, from working outside of received conventions.  Surely one of a teacher’s primary responsibilities is to expose students to new materials, texts, “information,” ideas, and/or ways of working with old ones.  Reading texts that are classified as “innovative” or “experimental,” in particular, often holds useful lessons about form and structure; such texts often manipulate formal and structural elements reflexively – valuable even for a writer who wants to understand how structure works in traditional genres.  I think reading and writing in unfamiliar ways changes one’s brain a very little bit, burns new teeny tiny micro pathways, and thereby almost magically enhances the stores of possibility in the black box of the unconscious, if not more frontally in the available mind, where writing takes place.  A passing assignment on assonance in a class thirty years ago has affected me profoundly, as it has manifestly affected this very sentence.

On the other hand, school may also be a good opportunity to refine the tools of a received genre, immerse oneself in a study of them, and why not?  Students, writers, and students writers, should study and practice what they want and need to study and practice.  Because there’s no particular moral or aesthetic imperative to “innovate.”  Which leads back to the first question!

RB: Thank you, Alexandra Chasin, for taking the time to talk with us, and for your work directing Writing on It All. It is one of those rare artistic and writing experiences where the public can not only enjoy, view, read the works, but can also jump in and create.

Rae Bryant’s short story collection, The Indefinite State of Imaginary Morals, released from Patasola Press, NY, in June 2011. Her stories and essays have appeared in The Paris Review, StoryQuarterly, McSweeney’s, BLIP Magazine, Gargoyle Magazine, and Redivider, among other publications and have been nominated for the Pen/Hemingway, Pen Emerging Writers, and Pushcart awards. She has won awards in fiction from Whidbey Writers and Johns Hopkins as well as fellowships from the VCCA and Hopkins to write, study and teach in Florence, Italy. She earned a Masters in Writing from Hopkins where she continues to teach creative writing and is editor in chief of the university-housed literary and arts journal, The Doctor T. J. Eckleburg Review. She has also taught in the International Writing Program at The University of Iowa.  She is represented by Jennifer Carlson with Dunow, Carlson & Lerner Literary Agency.