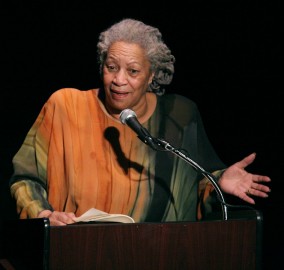 During Morrison’s editing of The Black Book in 1974, she discovered the horrific true story that inspired Beloved.

In early 1988, poet June Jordan and critic Houston A. Baker led a formal protest in the media that decried the whimsy through which the contribution to American Literature of Toni Morrison’s five novels had been overlooked. (Times)

She was appointed to a chair at Princeton University, becoming the first African-American woman writer to hold a named chair at an Ivy League university.

Toni Morrison is the first African-American woman to win the Nobel Prize for Literature.

Snap Shot
Chloe Anthony Wofford was born in 1931 in Lorain, Ohio and, after demonstrating an early interest in literature; she studied humanities at Howard and then at Cornell University. She pursued an academic career at Texas Southern, Howard, and later at Yale and Princeton Universities. She worked as an editor for Random House. She’s also worked as a literary critic, and a lecturer specializing in African-American literature. She made her debut as the novelist Toni Morrison in 1970 and soon gained the attention of both critical and a popular audience for her epic power, her ear for dialogue, her vivid imagery, and her lyrical portrayals of Black America. She has been a member of the American Academy of Arts and Letters since 1981, and has earned a number of literary distinctions, among them the Pulitzer Prize in 1988, before receiving the Nobel Prize for Literature in 1993. (Nobel)

Early Life and Non-Writing Career
Morrison grew up the second of four children in a black working-class family that possessed an intense appreciation for black culture, including storytelling, songs, and folktales that became an important part of her development. She earned a B.A. from Howard University (1953) where she became known as Toni and an M.A. from Cornell University (1955). She taught at Texas Southern University for two years and at Howard from 1957 to 1964. In 1965, she became a textbook editor for a subsidiary of Random House in Syracuse, New York; she worked home while raising two sons and producing her first novel. By the time she was finished with her manuscript in 1968, she had become a senior editor at Random House and the company was looking for an African-American editor to steer talent as the boom in black literary voices began. Beginning in 1984, she taught writing at the State University of New York at Albany; she joined the faculty of Princeton University in 1989.

Major Relationships
In 1958, Chloe Anthony Wofford married Harold Morrison, a Jamaican architect and faculty member at Howard. She divorced him in 1964 when he returned to Jamaica. That union produced two sons.

Writing Career
Toni Morrison’s first book, The Bluest Eye (1970), was an initiation story about an adolescent African-American girl obsessed with white standards of beauty and longing to have blue eyes. Her second novel, Sula (1973), examined, inter alia, the subtleties of friendship and the notions of conformity within a community. The third novel, Song of Solomon (1977), was an identity-searching story told by a male narrator in search of his identity, and this book brought Morrison to national attention. Then Tar Baby (1981), which was set on a Caribbean island, explored conflicts of race, class, and sex. Her fifth novel, Beloved (1987), was even more ambitious and probed rape, seduction, infanticide, alienation, powerlessness, regret, tyranny, and the paradox of motherhood under slavery and the workings of the supernatural.
In January of 1988, Morrison’s Beloved was nominated for the Ritz-Hemingway, the National Book, and the National Book Critic Circle awards, but won none of them. However, Beloved won Morrison her lasting recognition three months later when it won the Pulitzer Prize for fiction.

Since Beloved, Morrison has produced six more novels, two plays, a libretto, a number of children’s books, and a body of non-fiction. In addition to the notable awards below, she has been recognized several times for the impact of her body of work as a whole. In 1996, the National Endowment for the Humanities selected Morrison for the Jefferson Lecture, the U.S. government’s highest honor for achievement in the humanities.

Morrison was awarded the 1996 National Book Foundation’s Medal of Distinguished Contribution to American Letters for being a writer “who has enriched our literary heritage over a life of service, or a corpus of work.”

Taking Another Look
Harold Bloom edited a volume of critical essays on Morrison shortly after her Pulitzer but before the Nobel Prize win, a time when she had five novels for the critics to examine and a time well into the era of politicized responses to narratives, dramas, and poems. He noted that societal and historical resentments could crowd out aesthetic considerations that are the heart of his concerns. In his introduction, he declares he will gauge Morrison’s achievements to that date in “the daunting context of her prime precursor figures, Faulkner and Woolf.”

Marilyn Sanders Mobley, commenting later in the same volume, offers an intertextual look at the relationship between the traditional slave narratives, the beginning of the American literary tradition in prose, and Morrison’s Beloved. She concludes that Morrison makes the details of the traditional narratives more accessible and that she uses memory fragments to explore the inner life of slaves and to more openly portray the dimensions of that life omitted in the traditional narratives as she examines the guilt, alienation and the shame from the psychic scarring of slavery.

Magical Realism
The central theme of Morrison’s novels is the black American experience struggling to find themselves and their own cultural identity within an unjust society. She uses fantasy, an almost poetic style, and a confluence of the mythic with the historical to create impressive force and texture. She also uses elements of magical realism when ambiguity suits her style.
Art Historian Ernst Gombrich developed a multi-faceted approach to the analysis of art that included psychoanalysis, Gestalt psychology, and scientific hypothesis testing. He saw the perceptual restructuring of an image in human visual perception as having two parts: projection of unconscious rules guiding our vision and process of inference, which has both conscious and unconscious components. He pointed out that it is the inference tools we use to resolve ambiguity, and it is the results of how we individually resolve ambiguities we find in works of art that are the bases for sometimes widely differing reactions to the same piece of art.

In The Age of Insight, author and neuroscientist, Eric Kandel, explains the contribution to the art-science dialogue of Ernst Kris, a contemporary art historian of Gombrich’s and also a psychoanalyst, as commencing the empirical investigation of processes of perception of both the artist and the beholder. Kris declared that when an artist produces a powerful image out of life experience and conflicts associate with those experiences, that image has in it an inherent ambiguity, which engages the thoughtful viewer. Kandel amplifies this by saying that the extent of the beholder’s share depends on the degree of ambiguity in the work.

Morrison’s thinking about ambiguity is reflected in her interview responses and her work:

“In order to be as free as I possibly can, in my own imagination, I can’t take positions that are closed. Everything I’ve ever done, in the writing world, has been to expand articulation, rather than to close it, to open doors, sometimes, not even closing the book—leaving the endings open for reinterpretation, revisitation, a little ambiguity.”
Salon interview, Feb. 1998

“What difference do it make if the thing you scared of is real or not?”
Song of Solomon

We find Morrison a master practitioner of ambiguity in terms of outright fantasy such as in the opening lines of Beloved where we meet “124”—an address possessing the human capability of being spiteful and performing auto-kinetic demonstrations. Only a few pages later, as we are startled to realize we are inside Sethe’s memory of having to barter sex for the engraving of her toddler’s headstone, we are prompted to turn over whose face has the anger and a new appetite in it, realizing sadly that, whether it is the engraver or his young son looking on, there is a new generation being imbued with racial and probably misogynistic attitudes. Later in the story, we are teased by Faulkner’s brand of magical realism when the look at the threesome going to and coming from the fair with the shadows of their arms and hands appear to be holding hands, though the figures themselves are not. The possibility of a future for them as a threesome is almost palpable—and the central basis for hope in the story. The journey of the spirit portrayed by Morrison in Beloved has ambiguities to be resolved by the characters as well as the readers throughout and the questions that are left for us at the end of the story are truly haunting.

A Few Quotes of Toni Morrison

“I’m interested in the way in which the past affects the present and I think that if we understand a good deal more about history, we automatically understand a great more about contemporary life.” (Time interview, Jan. 21, 1998)

“What I think the political correctness debate is really about is the power to be able to define. The definers want the power to name. And the defined are now taking that power away from them.”
New York Times Magazine, Sep. 11, 1994

A Few Quotes About Toni Morrison

“I reread Morrison because her imagination, whatever her social purposes, transcends ideology and polemics, and enters again into the literary space occupied only by fantasy and romance of authentic aesthetic dignity.” (Bloom)

“The text of Beloved ends with a call for silence and forgetting, but our response is not that at all…Instead, it is an ironic reminder that the process of consciously remembering not only empowers us to tell the difficult stories that must be passed on, but it also empowers us to make meaning of our individual and collective lives as well.” (Mobley in Bloom)

Selected Awards and Prizes Given to Toni Morrison