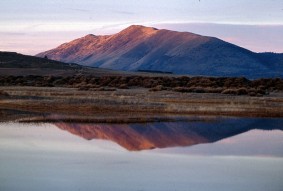 For most of my life, my body has been something to ignore or abuse, to punish or to make invisible. I don’t think I’m alone in this. But it wasn’t always this way.

The building blocks were assembled with tremendous care. My parents raised me to believe my body was a temple, and fed me in a way that was consistent with that belief. We were vegetarian long before it was in style. I was too young to notice how good I felt in my skin but I do remember the feeling of running until my cheeks were hot and red, and flopping down on the grass to watch the summer sky roll past.

The winter after my tenth birthday I learned to ignore my body and to try to make myself invisible. My parents divorced. The home cooked meals were traded for a stepfather in training who took far more interest in my body than I ever had. My body had hidden territories that provoked attack and made me vulnerable. I chose to live in my head. I became a reader, not a runner and wrote long stories about clean places where it was sunny and warm and people only shook hands to say I love you.

By the time I reached fifteen, I no longer bothered with the stories of my own. I slept too late to eat breakfast, was too shy to eat at school and raced home to watch my favorite soap opera. I stayed awake late into the night, watching other people’s lives and entirely avoiding the life that was mine. I had nearly achieved invisibility, so skinny I was a shadow stood sideways, and so quiet I felt sure if I never returned to school, not a soul would notice. But I was not invisible enough. I moved away from home that year, and left behind the new stereo that was my payment for being silent when the latest of my mother’s boyfriends made it a family affair.

Summer in my new place gave me the gift of wind on my face and sand under my feet, breathless sprints across the beach, safety and freedom putting blood in my veins again. I was sixteen. I stood naked in the sunshine through my open window and looked at myself in the mirror. This was someone new. I touched the curve of my hipbone and the arch of my ribs, and admired the fuzz below my belly. I was pretty, and I was whole. I fell in love with myself and I fell in love with a boy. I learned how to feel alive in all the hidden places and to share them with someone I trusted.

I could have felt betrayed when I began to throw up in the mornings, but I didn’t. I remembered how I’d begun, with my body as a temple, and I pictured the building blocks inside of me, making a beautiful, strong city in an entirely new world. I ate as well as I knew how and fell in love with my body all over again and the baby I was growing. I may have been afraid but my body knew exactly what it was doing. I gave birth naturally to a perfect baby girl, and was proud of us both from head to toe.

I can’t say when that changed, only that it did. Maybe it was the birth control pills and the resulting weight that began to creep up. Maybe it was choosing a marriage that was safety and security but not love, with my body as the bargaining chip and my self-respect as the cost. My skin became a canvas to paint with the damage I couldn’t speak about. I cut the soft places that would be hidden when I dressed, and drank to keep from walking away from it all. But sometimes I dreamed about the curve of a hipbone and the softness of a breast, the feel of lying safe and free in arms I could trust. I began to write again, to build instead of break.

It took falling in love with another woman’s body to learn to cherish my own again. I put my head against the place above her heart and felt the pulse in her belly and the curve of her hip. I traced the length of her legs and held the perfect shape of her heel against my palm. I saw the tangle of us below the sheets, breast and thigh, calves and feet and we were beautiful, scars and all.

When the sun comes through my window and I stand with my face to the glass, I see the body that carries me that carried my child that holds room for all the love I can give. It’s an entirely new world.

Kristen MacKenzie lives on Vashon Island in a quiet cabin where the shelves are filled with herbs for medicine-making, the floor is open for dancing, and the table faces the ocean, waiting for a writer to pick up the pen. Her work has appeared in Brevity, Rawboned, GALA, Extract(s) Daily Dose of Lit, Maudlin House, Blank Fiction, Cease, Cows, Crack the Spine, and is included monthly in Diversity Rules. Pieces are forthcoming in Bluestockings, NAILED, Minerva Rising , MadHat Annual, and Crab Fat. Her short story, Cold Comfort, placed in Honorable Mention in The Women’s National Book Association’s annual writing contest.

Kristen MacKenzie lives on Vashon Island in a quiet cabin where the shelves are filled with herbs for medicine-making, the floor is open for dancing, and the table faces the ocean, waiting for a writer to pick up the pen. Her work has appeared in Brevity, Rawboned, GALA, Extract(s) Daily Dose of Lit, Maudlin House, Blank Fiction, Cease, Cows; Crack the Spine, Eckleburg, Referential, Bluestockings, NAILED, Knee-Jerk, Minerva Rising, Mondegreen, Prick of the Spindle, Crab Fat, Wilderness House, Poydras Review and Diversity Rules. Her short story, Cold Comfort, placed in Honorable Mention in The Women's National Book Association's annual writing contest.