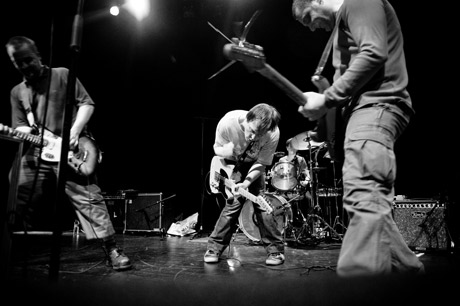 The Ex have defied categorization ever since they started playing in 1979. Born out of the punk explosion, when anything and everything was possible, the band have still managed to retain both curiosity and passion for their music. Using guitars, bass, drums and voice as ther starting point The Ex have continued to musically explore undiscovered areas right up to the present day: the early 1980s saw collaborations with jazz musicians and an Iraqi-Kurdish band. In the 90s the group found a myriad of partners from varied musical and non-musical backgrounds including Kamagurka, Tom Cora, Sonic Youth, Han Bennink, Jan Mulder, Shellac and Wolter Wierbos. In 2002 The Ex set up a lively musical exchange with Ethiopia, which eventually led to two CD recordings and hundreds of concerts with the legendary saxophonist Getatchew Mekuria. One of the Mekuria concerts helped celebrate WFMU’s 50th anniversary with a legendary show at Lincoln Center’s Damrosch Park, and we’re thrilled to have them at our venue, where they’ll be joined in the band by Chicago saxophonist/clarinetist/composer Ken Vandermark.

A fixture on the Chicago-area music scene since the 1990s, Vandermark has earned wide critical praise for his playing and his multilayered compositions, which typically balance intricate orchestration with passionate improvisation. He has led or been a member of many groups, has collaborated with many other musicians, and was awarded a 1999 MacArthur Fellowship. He plays tenor saxophone, clarinet, bass clarinet, and baritone saxophone.