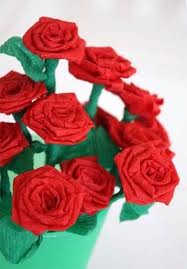 Though the birthday party was still weeks away, Mom sat sprawled on the hardwood floor with her legs splayed, a giant paper outline of the number four between them. Beside her were scraps of crepe paper and a small pot of glue, into which she dipped the eraser end of her paper-tipped pencil. She added a tiny, red floret to the masses already organized before her. It was a slow process whose tedious nature caused her to unconsciously clench her teeth. Her lower back ached as she hunched over her work, but she ignored it, inching ever closer to her project as she tucked the next floret in close to its sibling. The aim was to cover every inch of the cardboard backing—to create a blooming carpet in the shape of Riley’s new age that would be displayed at the party—held up for photographs.

Briefly, Mom considered the temporary nature of the prop in conjunction with the assiduousness of the task, but only briefly. She collected another drop of glue. She lightly ran her hand over the developing four; the dry, crackling sound was a hollow one that seemed artificial and ill suited. She wrapped the pencil’s eraser in paper again. She collected more glue. She inched the tiny flower in close to the base of another and pressed down; the pencil emerged an ordinary pencil, so she wrapped it again quickly. Her movements were redundant, mechanical. The rhythm was soothing and the certainty of proficiency manifested in an outward tranquility that her husband observed from across the room. He thought her task foolish, unnecessary, but even so, he was drawn to the calm in her eyes, the metronomic motions from the glue to the numeral, the delicate insertion of another daub of red. He watched Mom for a moment longer, until the curve of her back seemed awkward and ugly, then looked away.

Mom hadn’t noticed her husband watching her. Her slim fingers separated the crepe paper and twisted it without her. She thought of cupcakes with pastel frosting and little wisps of cotton candy on top. She thought of glossy invitations and the special felt party hat with “Birthday Girl” hand lettered on it. She thought of colorful gumballs in wide-mouthed jars and fuzzy, black mustaches adhered to sticks. She could hear the children squealing, see them posing open-mouthed in front of the carnival backdrop she’d painted. She collected more glue. She tried to remember her recipe for caramel corn and decided against adding peanuts. She rummaged through her craft closet while twisting and gluing, and pressing…searching for twine to anchor the banner flags she’d made out of complimentary fabrics. How would she hang them? What angle would be best?

Mom decided to wake up early on the morning of the party, very early. She decided to decorate in the dark quiet of the sleeping house. She’d cover the table in carnival fair, the primary colors bouncing off of each other, the dizzying stripes dancing wildly. She knew which garland twisted best, which glittery objects should go in front, which candies Riley would reach for first. Mom’s husband turned off all the lights except the lamp beside her before leaving the room. She could hear him brushing his teeth in the bathroom, while she wrapped imaginary presents in shiny foil, curled ribbons on their tops. She chose songs with buoyant melodies, tied balloon bundles to the mailbox, and invented beanbag games. Mom pushed past fatigue, past the Brahmin Indians’ axis in the four that remained through the Surga, Kshatrapa, Pallaver, the Arabs, Europeans, and us. She pushed past her own uncelebrated birth to get to Riley’s. The human heart has four chambers. Together, they are the size of a fist.

Mom’s mob of red blooms grew still larger under her deft hand; the plain white cardboard was transformed in the revolution. She wrote a new decree; Riley was to take the throne in her “Birthday Girl” hat and ruffled party dress.

Mom sat longer still, her feet going numb, her hands cramping closed, her eyes drying out. She made dozens more crepe paper flowers, the hot ache of hope growing ever so slowly into the shape of a four. She collected more glue.

Wendy Ralph’s most recent publications can be found in Shadowbox, Upstreet, Yemassee, and others. Wendy’s “Left Behind” was nominated for inclusion in the 2010 Pushcart Prize: Best of the Small Presses anthology and her work has been recognized as a finalist or shortlist finalist by Wasafiri‘s “New Writing” prize, the “Faulkner Wisdom Contest,” Iron Horse’s “Single Author Collection Competition,” Aesthetica‘s “Creative Works Competition,” the James Jones “First Novel Fellowship,” and Fish Publishing’s “International Short Memoir Prize.”