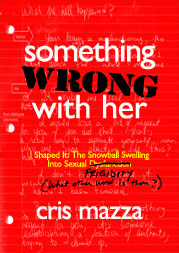 The most unusual true love story you will ever read.

SOMETHING WRONG WITH HER

by Cris Mazza
with Mark Rasmussen on Tenor Sax

I feel beyond caring who know about my sexual ‘condition’….  Growing up female in America — what a liability, Erica Jong said….  My failures, my dysfunction, my frigidity — feminists of 2nd and 3rd wave alike chastise me for the terminology, which places the blame on and finds something ‘wrong’ with me. —Cris Mazza, from the preface

“SOMETHING WRONG WITH HER is certainly the most unusual true love story you will ever read, layering recollected scenes and psychological analysis with journals, emails, letters, yearbook inscriptions, excerpts from the author’s past literary works, jazz metaphors, footnotes and more. Cris Mazza’s indefatigable self-scrutiny creates an experience that verges on the psychedelic. Reading this book is less like reading a typical memoir than like spending time in someone’s else’s head, or someone else’s life. The generous decision of literary love-object Mark to allow his writings to be included here adds a fourth — or is it a fifth? — dimension to this unprecedented document.” —Marion Winik, author of Highs in the Low Fifties, First Comes Love, and Rules for the Unruly: Living an Unconventional Life

From Something Wrong with Her: A Hybrid Memoir

Yes, I was one, all through college. A virgin in too many ways. A virgin whose first kiss had been milestone enough that subsequent occasions for kisses still triggered uneasiness, but not nearly as much trepidation as caused by the virginity itself. Not — as some have assumed — anxiety fostered by relentless itchy lust. If that were the case, then prospective situations would not have resulted in the resistant rigidity with which advances were met.

If I were to enumerate my angst, the bullet points would be:

In terms of importance, they shuffled. Sometimes #1 was the most vital, sometimes one of the others. But most often it was #4. READ MORE

Cris Mazza’s first novel, How to Leave a country, won the PEN / Nelson Algren Award for book-length fiction. Some of her other notable earlier titles include Your Name Here: ___, Dog People and Is It Sexual Harassment Yet? Mazza’s fiction has been reviewed numerous times in The New York Times Book Review, The Wall Street Journal, MS Magazine, Chicago Tribune Books, The Los Angeles Times Book Review, The Voice Literary Supplement, The San Francisco Review of Books, and many other book review publications.

Contributor
Cris Mazza’s next novel is forthcoming from BlazeVox Books. Her last book was Charlatan: New and Selected Stories, chronicling twenty years of short-fiction publications. Mazza has seventeen other titles of fiction and literary nonfiction including her last book, Something Wrong With Her, a real-time memoir; her first novel How to Leave a Country, which won the PEN/Nelson Algren Award for book-length fiction; and the critically acclaimed Is It Sexual Harassment Yet? She is a native of Southern California and is a professor in and director of the Program for Writers at the University of Illinois at Chicago.