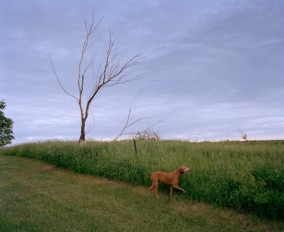 My fiction resides in dreams, memories, the thoughts that cycle through my head trying to find a way of escape. I remember dreams as if they have happened to me, memories as if I have conjured them in some half-sleep state. I believe things happen in some indefinable reality but acknowledge that I may never be able to capture them. We all are seeking emotional truth, but even that can feel false. I use broad strokes, fill in the details, construct something that has a form, but how do I imbue it with meaning? Is it that one moment I am writing around, trying to find the right angle to reveal its significance to me? Or do I hold onto the significance of the dream/memory, waiting for the opportunity to unleash it?

My fiction lives in the space between what has happened, what may have happened, what I wish had happened, and something I am terrified of happening. For Long Gone, I wrote around several subjects, winding down into a dream/memory that has stayed with me for over fifteen years. When it “happened” I felt its significance, but could not tell you its meaning or the meaning it might have for me years later.

The moment between the narrator, her sister, the fawn and the car: that happened. In this case, as in many cases, the narrator is some approximation of me, some fragmented aspect of personality, bundle of experiences. But there were several realities that day. Mine, holding onto my sister, fearful of losing her to the man who would become her husband. My sister moving away from me and toward him. That car, with two people I did not know, moving, then stopped, then moving again. And the fawn, just learning to live, forced back into the brush to die.

I did not know at the time what could separate a sister from a sister: a husband, a child, a sickness, an unwillingness to accept a new reality. I did not know, then, that those things could also bring you back together, build a self you didn’t know you had, a relationship you wouldn’t have had otherwise.

That said, I chose to tell Long Gone in this particular way, because it is something I could construct, not something I experienced. While I may have seen the fawn and the car and heard my sister scream as if it could save something, anything, in that moment, I did not experience the sense of removal the narrator feels in this story. I had an idea of distance, of futility, and what that could mean in a relationship.

My past professional experience with addiction and mental illness, coupled with the awareness of my own psychological struggles, have informed my writing in a way that seeps into my fiction. My characters experience loss and fear acutely. They are obsessive or manic, damaged or disconnected. In Long Gone, the narrator is disassociated from her own experience in a way that feels she will never again be a participant in her own life. I recognize this feeling. I know the feeling of the word “gone.” But I have come back from that reality to a different reality, one that allows for connection: of the self to others, of dreams to memories, of the past to the present to the yet and never to be. 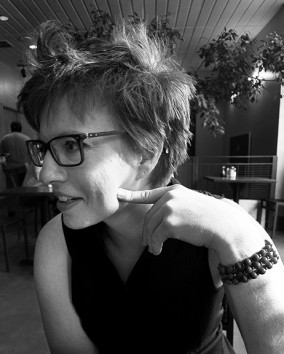 I tell her there are levels, layers to my sickness. I wake up one person and go to sleep an entirely different person. I find myself on walls and ceilings, in bathtubs, under covers, holding my breath. My thoughts tick rather than flow, everything feels raw and out of proportion. My body feels too big for my head, my thoughts too big for the room. I feel things expand and contract, but there is no physics at work here, just perception, or misperception, as my counselor says.

Whenever I mention my treatment, my sister falls just short of rolling her eyes. Instead of reprimanding herself, she snaps at me, “You think too much, always have.” I have no response to this, but she continues, nonplussed, “Your problem is that you hold onto the sickness, nurture it, lavish it with attention.”

As children, we were magnetically opposed. The friction between our worlds, palpable. Where she was gripped by time and place, I was in my head, losing track of myself. Her mind was uncluttered, at attention. Mine would deliberately avoid, falter, distance. But every night, afraid of the same things—the sounds of an old house settling in for the night, the overwhelming darkness of the moonless countryside, Grandmother’s needling fingers in the next room—we pulled our twin beds together and I slept on the crack between to be closer to her. I was always afraid of edges, but there I was, right on top of two. Sometimes the illusion of safety is enough, my counselor tells me, but even now, I cannot find sleep without imagining us locked in each other’s force-fields, fighting to come together but always drifting, ever so slightly, apart.

We are three years apart — she, the older sister, born three months premature, her lungs desperate for air. Yet somehow she turned into a runner, long distance. My muscles twitched when I watched her run, like a set of phantom limbs, as she set every pace or fought to get out of the pack. It’s difficult to describe how a person can put emotion into an action, but that’s what my sister did.

But no one can really make anyone feel anything, my counselor says.

When she chooses to pronounce this particular gem, it is usually because I am talking about Grandmother.

Use feeling words, she urges.

She made me feel sad, mad, afraid.

Now own your feelings, she says.

Are these emotions all in the past?

To speak of Grandmother would deprive me of air. I try not to revisit her sins at night, as there are too many of my own to count.

In here we talk about breaking the cycle. Of addiction, abuse, neglect, self-destructive behavior, and above all the denial and the rationalization of these things.

She is six months along, as they say. Her due date, her baby’s due date, my own birthday. I take it as a sign of something, but I’m not sure what.

When she called to tell me, her voice was clear and clean, almost antiseptic. She was hesitant to give me details, like I could infect the baby if she were to allow herself any emotion.

I worry what will happen if I am not allowed the chance to hold this baby. In this bed, surrounded by flatly-carpeted ocean, I fear I am nothing and no one without this possibility. This baby doesn’t need our history. We could start anew. It would be like when we were girls and in the summer, I rode my bike along with her on every run. She could go for hours, and I would loop around her on the country roads.

It was approaching dusk, not a mile from home, when a car passed us with a sloppy shifting of gears. We had been singing something before this—very loudly—it had been a good running day, and I was looking down, pushing into the pedals as I raced back around her.

And then a smack of a car against a solid mass. We could see the car, but not what it hit. I had gotten off of my bike by then.

It was very quiet where we grew up and the sound of brakes on pavement sounded so surprising. Standing, as I was by my bike and my sister beside me, planted in earth, blanketed in the thick air, it was not like being in a box, hit by another box. We were surrounded by the flat, ungiving land of our ancestors, and the whine of the brakes lifted up into the sky and died there. The sounds of people arguing in a car, wrestling with a decision, filled that distance.

It had been a fawn, we saw then, just getting its legs beneath it, and when the people in the car made their decision and drove off, we saw one of its hooves bloodied and severed at the joint, and when I think about it now, it managed to hobble off fairly well on its remaining three working legs, but all I could see then was that hoof, swinging with every stride it took down into the ditch to hide in a field of brush. My sister was in tears and screaming, Motherfuckers. Come back here, you motherfuckers! It would have been funny, and it was, I guess, because even as she did it, we both recognized the futility of yelling obscenities at a car long gone.