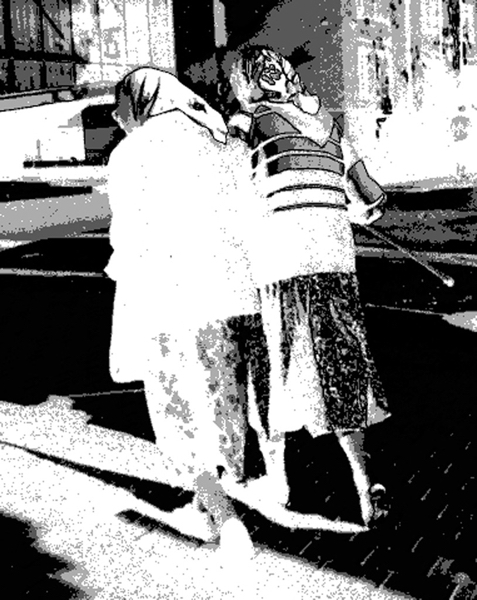 As I sell my art and craft for a living—both in markets, street fairs or street festivals, and through galleries or stores—I walk miles. I don’t walk to the markets, of course. I load (rather overload) my car and drive to my destination. Then I carry my stuff (tables, canopies, racks and shelves, crates of potteries, heavy sculptures, large canvases) from my vehicle to their display location. Sometimes I use a wheeled contraption, but delicate items (the most numerous) need to be transported by hand, one by one, repeating ad libitum the trajectory between car and booth, store, or gallery. I don’t sweat, don’t fret. I breathe quietly. But I walk miles, several times a week. I have for my entire life.

Therefore, this banal motion—plain and functional, parallel to the ground—is such a basic habit that I feel it defines me. I don’t just walk. I am a woman walking.

Quite an ambiguous label, as the first thing it unavoidably evokes is a peripatetic, a prostitute—one who treads the sidewalk back and forth seeking a client. The association doesn’t bother me at all. But the picture coming to mind as I self-define-while-in-motion is a different one.

I see women of my motherland (the far South of Italy) in the era of my childhood. Four, five decades ago. A time that seems remote. A universe lost and revolved.

I said ‘picture,’ yet the visual element of the memory is minimal, fleeting if not utterly absent. I remember those ladies in my spine (with a downward shiver, quick like a whiplash) and in my heels (meeting the ground with passion and ineluctability, embracing it, kissing it).

I said ‘ladies.’ A joke. No, they weren’t ladies. Or prostitutes. I said ‘heels’ meaning the body part, the round rear end of the human lower extremity. Calloused, for the very specimens I am referring to, and encountering the ground with such frankness that an intercourse couldn’t be avoided—a profound love affair due to the very absence of shoe heels (those prostheses meant, indeed, to avoid the sultry intimacy of body and soil).

Ladies wore heeled shoes by definition, at least in the era I am recalling. Fake heels signaled status, and a seductive purpose. They twisted and modified the act of walking, making it demonstrative rather than functional. Walking on even moderate heels is intended to be seen, acknowledged. It becomes a visual display and an auditive one—its clicking a Morse code sending faint yet clear messages. Here comes a female to be noticed.

Women I recall from my childhood, walking in their men’s shoes, worn sandals, or bare feet were essentially peasants. Sometimes nuns.

Also nuns progressed in the fashion that my body recognizes—fast, efficient and smooth, parallel to the surface of the earth, a vector. More or less, as their motion contained spurious elements, a whatnot, a disturbance I’m not sure I can pinpoint. Once more, perhaps, acoustic: the rustle of excess clothing, the unnecessary fluttering of veils offering to the surrounding air more friction than needed. The metallic chime of dangling rosaries, crosses, beads. The dull thumping of ropes, fringes, and tassels. A white noise, superfluous, distracting.

Walking women I recall from my childhood—nuns included—were working women.

They often carried things, like I do. Baskets, bundles, infants, animals, or a combination of the above. They used to carry heavy loads on their heads—an ability I imagined I should soon acquire, doubting I ever would, because it seemed superhuman.

In today’s Western world, I wonder who could balance on her head a jar full of water, a giant hamper of firewood plopped on a strip of cloth, on top of coiled hair, and no fasteners. Then walk miles on unpaved dirt roads, accidented riverbeds, rugged stone stairs of medieval hamlets, down the slope with the goats, on sensible, sensitive heels. A Pilates instructor, perhaps? A star modern dancer, top model? None of them.

Women carried the heavy stuff on their heads, for their hands and arms to afford other loads.

Aplomb. The straight line that falls from the fontanel—at the center of the imagined circumference whereupon the jar or hamper is placed—right between the heels, passing through the coccyx, the tail.

Aplomb. To achieve it, you need to keep your chin down. No, you can’t look up. Your perspective cannot be higher than eye level, the horizon. A terrestrial perspective. Pedestrian. As if all claims to elevation were barred.

When I (rapidly, as I really haven’t that much time for musing—these things need to be transported over there and they won’t do it on their own—I have distance to cover)…When subliminally, at a spinal level—gently, unobtrusively tickling my consciousness—I recognize myself as a walking woman, two figures always flicker in the back of my mind. They are vague, not truly familiar, unrelated to one another. Yet they invariably lit up.

One of them is a literary reference. She is Yasushi Inoue’s mother, as the famous writer describes her in a memoir devoted to the last years of her life.1 Afflicted by dementia, she has withdrawn within a world of her own, barely recognizing her relatives, when one night she leaves her bed and runs into the street in a frenzy.

When she is found, she is steadily walking on the main road leading to a nearby village. Inoue describes it: “On one side were paddy fields a lever higher than the road, and on the other side were more paddy fields, but that side was terraced and the terraces ended in a ravine. Bathed in the white light of the moon, Mother was walking along this road. She was looking for me, the infant.”2

Prey of hallucinations, the eighty-five-year-old woman is reviving an episode that occurred when, at twenty-three, she thought that she had lost her baby (the writer himself). Desperate, she rushed out and started frantically on the road, looking for a toddler who had vanished in the middle of night. Heading anywhere and nowhere—her diminutive silhouette cut out by the moonlight.

The brief passage describing the incident—rather the impression it leaves within the author’s psyche—is strikingly intense. It’s a small lens, yet powerful, under which the entire narrative comes into focus.

As he records his mother’s increasing evanescence, Inoue starts to reassess her overall incidence in his life, which appears to have been tenuous at best. Triggered by her lapsus, omissions, and apparently incoherent behaviors, he re-examines the past, and he is forced to admit that his mother embraced family life half-heartedly, more compelled by outside circumstances than by her own desire. Overwhelmed by the war and too many pregnancies, she even sent her boy to live with a relative, at a very early age. Therefore, their time together was minimal, their relationship nominal.

Having formed a happy, healthy bond with his substitute mother, Inoue didn’t register suffering due to his mother’s coldness, or so he believed. Only on witnessing the fading of her memory and mind, echoes of her remoteness reach the adult man, weaving a chilly shroud of disconnection and lovelessness.

Yet such gloomy veil is torn apart when young-old Mother rushes into the street in her night kimono. Perhaps freezing, perhaps in a sweat but not realizing it, probably barefooted, she engages on the road leading to the village of Nagano—a ravine at her side and the moon above her—running after the baby she believes (she knows?) she has lost (let go of? abandoned? given up?).

“In my mind’s eye I conjured up a picture of myself as an infant with my twenty-three-year-old mother walking along a road bathed in moonlight, searching for me. And there was another image—of myself in my sixtieth year, searching for my eighty-five-year-old mother on the same road. One picture was permeated by a chilling quality, the other by a certain awesomeness. These two images, however, immediately became juxtaposed and merged (…) The chill and the awe also fused and were penetrated by the piercing light of the moon.”3

I am not sure why this passage impressed me so much when I read it—to embed itself not in my mind, but in my body memory.

No doubt, the page is loaded with emotional meaning, as it witnesses the single time when the author realizes a connection between mother and child. Love and caring were there, at least at a given moment. In its fleetness, such epiphany leaves an indelible mark. It is both “chilly” and “awesome.” It possesses an evident healing quality, though no awareness of a wound in need to be cured was there.

What most strikes me is that such palpability of feeling doesn’t express itself in words—as it would be expected—or by holding hands, with hugs, caresses and kisses. It is expressed by walking, by the frenzy of Mother’s frail yet strong legs harpooning the road—the connection symbolized by the road itself.

The other woman I see walking (the first image always merging with the second one) is unknown to me as well. My father mentioned her briefly—his dad’s mom, my great grandma.

The year is nineteen thirty. She is about fifty. Her husband has passed away. She has borne ten, eleven, twelve children? Some, of course, are grown up, but some are at home, and they need to be fed. She was left with lots on her hands and no trade—not an official one, though she doesn’t stop toiling from sunset to sundown.

But she doesn’t lose heart. She has letters composed for her, then sent to America or Germany, to call back a couple of immigrant sons. Help is wanted to put food on the table for the youngest. She sews, washes and irons, mends, embroiders, and so do her daughters. A few of them get married. One rises up the ladder and becomes a midwife. The early widow, indeed, keeps the family afloat.

She had inherited a property about twenty miles away. Just a scrap of land, planted with olives trees and a vine—if cared for, it could provide yearly profits.

Twice a week, she went to survey it as needed. On foot, as she couldn’t afford transportation, but—said Father—she didn’t mind walking. She left in the wee hour and came back in the evening light. The round trip plus dealing with the farmhand took the day—most of it spent en route.

Dust and rocks. Deserted country road, small paths, dry riverbeds. Atop, not the moon but a scorching sun. She wore black, her head scarved. On leaving, she had probably dampened her braids, then coiled and pinned them. They kept her skull moist, her brain cool.

She didn’t seem bothered, Father said, by the road. Straight like a flagpole and fast as a fox, an arrow. But—he adds with a sort of embarrassment—she couldn’t be defined a sweet, tender creature. On the brisk, hardy side.

I have wondered about those daylong pilgrimages, almost a hundred years ago, so distant from where I now live, so remote.

What did my great grandmother think about? Plausibly her property, and the practical issue she was well determined to solve. Other practical issues that she had left at home. Money and food. Chores and chores. Debts. Deadlines. A web of trivia. Small things, and inexorable. Like steps. Plain. One at the time. Forward, forward. Inexorable.

What else did this un-gentle, un-romantic, un-lyrical deambulating human being think about? Did she enjoy the rough, barren landscape? The verdure, in the appropriate season? Flowers? Birdsong? Not sure.

In so long a trajectory did she fall into a sort of trance, sometimes, as if trivia could vanish and just motion remain—this firm pulse, quiet impetus, this wave up and down her spine? She must have. Did she feel the soft friction of air, even in the noon heat? Even then, the fresh air. Perhaps, freedom.

Artwork at top of page is courtesy of the author.