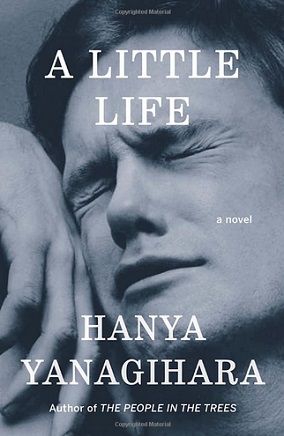 A Little Life by Hanya Yanagihara

When four classmates from a small Massachusetts college move to New York to make their way, they’re broke, adrift, and buoyed only by their friendship and ambition. There is kind, handsome Willem, an aspiring actor; JB, a quick-witted, sometimes cruel Brooklyn-born painter seeking entry to the art world; Malcolm, a frustrated architect at a prominent firm; and withdrawn, brilliant, enigmatic Jude, who serves as their center of gravity. Over the decades, their relationships deepen and darken, tinged by addiction, success, and pride. Yet their greatest challenge, each comes to realize, is Jude himself, by midlife a terrifyingly talented litigator yet an increasingly broken man, his mind and body scarred by an unspeakable childhood, and haunted by what he fears is a degree of trauma that he’ll not only be unable to overcome—but that will define his life forever.

In rich and resplendent prose, Yanagihara has fashioned a tragic and transcendent hymn to brotherly love, a masterful depiction of heartbreak, and a dark examination of the tyranny of memory and the limits of human endurance.

“The phrase ‘tour de force’ could have been invented for this audacious novel.”
—Kirkus Reviews, starred review

“This is a novel that values the everyday over the extraordinary, the push and pull of human relationships—and the book’s effect is cumulative. There is real pleasure in following characters over such a long period, as they react to setbacks and successes, and, in some cases, change. By the time the characters reach their 50s and the story arrives at its moving conclusion, readers will be attached and find them very hard to forget.”
—Publishers Weekly Hanya Yanagihara is the author of The People in the Trees. She lives in New York City.