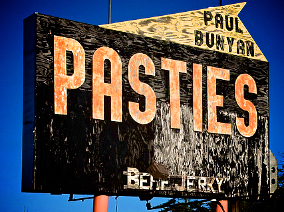 When thousands of Cornish miners immigrated to Michigan’s Upper Peninsula in the 1800s—running their battered wagons over Precambrian rock, through white pine groves and cedar swaps—they bequeathed a fetish for Cornish pasties to everyone in the region.

As pasties became popular in the U.P., baking wars erupted. The women—English, Swedes, and Fins—raced to concoct the finest pasty with only two rules: the pie must contain potatoes and onions. Later, a retired miner with gout and a hanging belly compared the pasty development to the nuclear arms race. “Terrible,” he said. “Just terrible.” Women stayed up for days and days, weeks even, and argued with themselves and others. They tested and retested the ingredients and the amounts: one carrot or two; diced rutabaga or sliced; venison or beef; red or white onions. The big-boned women wore wool year-round and slaved over cast-iron stoves and open flames while their husbands chipped rock at the mines hundreds of feet below ground.

Cornish fisherman believe it is bad luck to bring pasties on board a vessel and refuse to pack the hand pies, even on short trips.

Miners, with ore-stained fingers, pinched the pasty’s seam at the bottom and ate the pie from the top down to prevent the juices from running down their arms. When the pie was down to the last morsel, the men, still hungry, fed the finger-blackened chunks to the “Knockers”—the “mythical people”—who dwelled in the darkest depths of the mines and sometimes caused hell for those who failed to appease them.

Similar to the pasty, another Cornwall favorite is the stargazy pie. It looks like an apple pie except it’s filled with whole pilchards (sardines) and the fish’s open mouths must protrude from the crust and gaze at the stars. This European favorite, however, has yet to catch on in the U.P.

Unlike today there were no microwaves or TVs or refrigerators on site at the mines. There were no cell phones or e-readers to take to the bathroom or the outhouses. Wives in the early twentieth century didn’t send their husbands to work with Lean Cuisines, peanut butter or bologna sandwiches, and juice boxes. No, the men carried pasties day in and day out their entire careers—the warm pies wrapped in newspaper and slipped into their breast pockets or held under their armpits. Some tucked the “D” shaped wedges into their mining helmets, and every day at noon the men took lunch.

Laborers who chipped rock in the open air stood in the shade and ate their pies, lied about fishing or junior’s accomplishments, while those hundreds of feet down didn’t have the same luxury. They reheated their pasties packed in dinner pails and huddled in the dark to eat them. When a man worked alone, he placed his pasty on a shovel and raised it above a carbide lamp. As the pasties cooked an aroma of rutabagas and onions permeated the dank underworld.

Like lemonade, pasty stands were erected in U.P. cities to cater to tourists during the late 1800s. As the pasty became more popular, the stands changed to indoor establishments and many exist today throughout the region; in fact, every U.P. city with a population of 500 or more has at least one pasty shop.

The world’s largest pasty—a Guinness World Record holder—was made in 2010 in Cornwall, England. It was fifteen feet long and weighed over sixteen hundred pounds. The winning pasty was cooked for eleven hours and had to be trucked to a weight station for verification. After the pie was declared a world record, hungry cooks and friends chipped away pieces and ate the monster pasty over several hours, which was the equivalent of thirty-five hundred individual-sized pies and ninety-two hundred U.S. dollars.

I was thirty-four when I had my first pasty. My girlfriend and I were driving home to the U.P. when the urge struck. “Let’s stop,” so we did—at a crooked shed on M-28 with a stenciled sign: “Opal’s Pasties, from Our Kitchen to Yours.” It was a chilly day and the pasties were warm and smelled of beef and onions. On the second bite my throat tickled. I coughed. Something stringy was caught in my throat. I coughed again, spat onto the paper. In the regurgitated mess was a hair, a long gray hair. The woman cooking had long gray hair. I politely called her over; she was sweating. I stretched the strand onto the pasty wrapper, and it was longer than the wrapper. She frowned, offered another pasty. I thought about its brothers and sisters—the other hairs—that might be in there. We pushed the pasties into the center of the Formica table and gave our best smiles.

Keith Rebec resides in the Upper Peninsula of Michigan. He’s a graduate student working on an MA in Writing at Northern Michigan University. His writing has appeared or is forthcoming in Shenandoah, The Portland Review, Monkeybicycle, Hobart, and Devil’s Lake, among others. He’s the managing editor for the literary journal Pithead Chapel, and you can learn more about him at www.keithrebec.com.