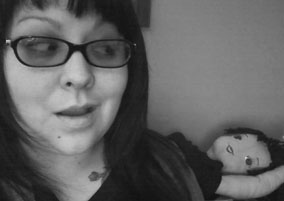 It’s all under the wrapping paper. In the downstairs guest room closet. Somewhere Elisse’s husband would never find it because unlike Elisse, he could never get the wrapping paper to surrender to the corners of any box with that willing crease and easy smoothing out of surfaces that Elisse seemed to charm from the paper. He’d left that nonsense up to her and left the rolls of wrapping paper in the downstairs guest room closet, pillars of her domain. He didn’t know the paper was camouflage, hiding the canisters of beans and flour and sugar. At first there was enough room in the corner of the closet, but then Elisse had to remove the spare sheets and comforter and two baby quilts from too many years ago. Had to find some sort of space-age technology that is only sold in the late-late-night-right-before-it-turns-early-morning hour. She took a vacuum to the space bag full of sheets and blankets and sucked the air out of the bag. The attachment wouldn’t hold because she didn’t (“But wait! For only five dollars more!”) order the one from the commercial and, instead, used her own attachment from the handheld vac. But, obviously, it still got the job done. The baby quilts she lied about giving to a donation center and the sheets and blanket for guests that never arrived had the air sucked out around them. They collapsed to nearly an inch thick. A flattened life. Pushed under the always-made guest bed.

The space bags freed up room for the other goods. The flashlights and, oh yes, the WaterBob Emergency Drinking Water Bathtub Storage device. Elisse’s husband had pointed it out at Home Depot and walked away chuckling (not out loud, but like he does—in his chest). Sure enough, she went back the next day and grabbed up two (okay, maybe four) and kept them stored behind the guns. Yes, the guns. She would never be able to explain this part to him. All the years of his family buying guns and she saying “never in this house” and admitting it wasn’t about the gun itself but the accidents around them. And never admitting she didn’t want something so close to her that could end it all right then. Pills might afford some time for her to change her mind. Razors not so much, which is why she forbade them as well (except the dozen or so in the emergency supply kit, tsk). And who would hang themselves? Of course, now we can all think of at least three people who did. It’s sad like that. Saying out loud “no one would do such a thing—but oh, that poor girl did” and “Him.” That’s the him that we shake our heads about and heartsunk, but all the while knowing it is cliché, we say, “But why? Why?! So much to live for. What a shame!” when we put his book down. No, Elisse’s first option was always the pills. But the gun seemed too easy and efficient and, so, she said politely and with as much respect as she could for very responsible types that do keep their guns in safe places and haven’t rattled off the location of said safe place to neighbor kids and the family’s trouble-maker cousin, she said, “No. Not now. No gun in the house.”

But Now came when she could not find a guide to a survivor’s kit without a gun listed among essential materials.  All mid-morning Internet reading and clicking at 24-Hour, 72-Hour, 7-Day, 1-Month, 1-Year survivor kit pages had bulleted or, at least, noted guns. Some with “Go get one! Today!” hyperlinked to gunsamerica.com. Rabbit hole link, she always called it. So, she gave in to the handy 11-in-1 Survivor Tool and the razors and other blunt objects like the Dewalt Heavy Duty Flashlight and that damn new baseball bat (instead of asking the many friends and family that are sure to have one forgotten in the garage). Yes, she bought a bat made of northern white ash and kept it snug in the closet. If it is good enough for the Major Leagues … . And then, finally, the guns.

We can’t begin to imagine how she managed to buy them. The paperwork and costs aside, she had to have had a lot of questions, amateur ones or “Questions to Ask” printed out from the “Buy A Gun” page of How.com. And, of course, the ending up with a half-dozen options (at least) and hoping to get them down to three, but not wanting to tell the clerk so. Elisse probably couldn’t imagine how it happened either, even though she was there. That’s how these things go sometimes, the body and mind work and the muscles move and the throat constricts and relaxes. Air and sound comes out and then one comes home with a First Alert Five Live Bolts and 6mm Recessed Door Gun Safe and a .22. Then a 9 mm.  And a .45. And her self, made of memories and wants and silly nostalgia for pumpkin flavored and scented everything during the Fall, had left her. Elisse—a vapor in the wake of the moving, doing, and acting body that needs a gun.

What Elisse’s husband wouldn’t understand after finding the guns is the amount of Stride gum, blood pressure meds, and copies of Uncle Remus stories piled up between the gun safe and the canisters of food. His favorite gum. His type of medication in bottles of various dosages, each with a stranger’s name on it. His most remembered tales read to him by his racist-in-the-way-most-older-generations-were-racist mother. But she included several editions of the book as if she didn’t know which was the one he remembered; Elisse was thoughtful like that.

But nothing could prepare him for the schematics he found in a softened-to-a-manila-fuzz, worn envelope from the Loss Mitigation Dept. of their mortgage company on her desk. It had been there many months. Old re-fi paperwork, he assumed. Instead: an 8×8 underground bunker. And a 10×10 one. Print-outs from a “Design Your Own Bunker” site. He’d liked to have found the print-outs for the next size up bunker schematics, but instead only her hand-drawn schematics were left. He had to hold that notepad paper with an entire underground bunker-home drawn on it up to his face real closely to read each detail. It had space for a 37” flat screen TV and a cubby craft corner. What the hell, Elisse?

Many would say she had so many tragedies in her life. They’d bumble around the mortuary viewing room and say to one another, “Elisse had so many tragedies in her life. Poor thing.” Her father’s “losing battle with cancer” (a morbid mantra of sorts) was too much after losing her mother so unexpectedly. And, “Her frail Matty, poor Elisse. The loss of a child is unnatural.” Or, “It’s unnatural to outlive one’s own child,” many said. The neighbor Maudell who always got every saying wrong would say, “It’s unnatural to outgrow one’s own child.” And we would not correct her at a time like this and no one would walk away and feel the neck sag and the eyes roll up the way one does when stuck in a small room with Maudell whose continual usage of “suppose to be” instead of “supposed to be” spun our blood, especially when she’d next remind us the word was always “world-wind,” not “whirlwind.”  That Maudell—smelling of generic dried peanut butter and forcing each of Elisse’s distant relatives into her arms to nestle in the soft folds of her neck and that massive bosom.

Some would even say Elisse’s receptionist job at the vet was too much for her—all those unhappy pets. Really? We’d nudge each other and squeeze one another’s hand. Sink a snort or laugh back into the empty belly. Thinking of which restaurant we’d eat at afterwards and some errand to run and how the cadence of rising voices about Elisse’s life of tragedy was a selfish type of mourning. How under that whir was still the stone-gut What The Fuck, Elisse? sensation that kept us from imagining that she wasn’t just around the corner ready to answer questions or close to sending another text about her latest failed baking attempt. No, no one would talk about how bad of a baker she was, though it seems it should be added to the tragedies in her life because she couldn’t get enough banana or zucchini bread. Or donut holes (“which are fewer calories than actual donuts,” she would say. Har har, Elisse.)

This life of tragedy wouldn’t give an excuse for the drunk driver that hit her, of course. We don’t excuse them at all. We can’t. The same way we don’t talk about rapes in prison. What’s to say? But somehow the idea that tragedy was always welling up around Elisse would make the details of the accident fold up nicely. The way I dropped the phone when I got the call—not because I was shaken up but because I had been pulling clods of snow from my shih tzu’s belly and my hand was cramped and numb—and the finding of the survival kit and guns and Stride gum and underground home-bunker plans all making sense. Elisse’s tragic death and her tragic life and her attempts to stave off tragedy with items secured in a 2 x 6 foot closet. And the tiny fury that came when her pine coffin, on its way into the earth, seemed to scuff a bit against the concrete burial vault—all part of God’s plan. Her new coffin with a thick meaty scratch near where Elisse’s head must be. And her husband said, “Oh” in a voice he hadn’t used when he asked us to pick out her burial clothes or when he called caterers, florists and the credit card companies. With a higher and softer voice, like the kind of a not-yet-awake-not-yet-asleep child asking a question to anyone who might pretend to have an answer, he said, “Is she alright in there?” Natanya Ann Pulley is half-Navajo (Kiiyaa’aanii and Tachiinii clans). She has a PhD in Fiction Writing from the University of Utah and is an Assistant Professor at the University of South Dakota. A writer of primarily fiction and non-fiction with outbreaks in poetry, Natanya’s publications include Western Humanities Review, The Florida Review, Drunken Boat, and McSweeney’s Open Letters (among others). Links to publications can be found on her site: gappsbasement.com. Areas of interest include: Disability Studies and Horror Theory, as well as Experimental Literature, Native American Literature, and Graphic Novels.