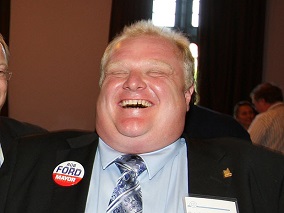 For decades, politicians’ indiscretions have been fodder for late-night comedians and have provided laughs for the general public. With the recent publicity that Rob Ford, Toronto’s Mayor, received for smoking cracking during one of his “drunken stupors,” we think back to Washington, D.C.’s Mayor Marion Barry, when he was caught on video illegally smoking crack at the Vista hotel in 1990.

When I first heard about the Marion Barry incident while at college in St. Louis, I could only find humor in this occurrence. What I didn’t consider was that 1987 was the height of crack use in D.C. when drug lords were practically running the city, unemployment and homicides were at an all-time high, the city’s deficit was over $285 million and D.C.’s public agencies were in disrepair. The city was falling apart at the seams, and our womanizing Mayor was smoking crack and getting drunk. After this debacle, Barry was rewarded by Washington, D.C.’s citizens by electing him as a fourth-term mayor and subsequent seat on the City Council. While the jokes pervaded on radio and TV shows, I wasn’t laughing.

Fast-forward twenty years later, and we’re confronted yet again with a crack-smoking mayor and a cocaine sniffing congressman. I can’t help but wonder if Mr. Ford should be focused on Toronto’s tepid economic growth rate, the first decline in Toronto’s manufacturing sector since 2009 and the 28 percent decrease in residential construction? While Torontonians are confronted with these important issues, Mr. Ford not only decided to remain in office but he also was rewarded with an invitation from a D.C. radio station to join the “Sports Junkies” show, where the “avid sports fan” will be giving his weekly National Football League picks. No joke.

And how about Republication Congressman Trey Radel of Florida? Rather than buying 3.5 grams of cocaine in a car parked outside a Dupont Circle restaurant, less than three miles from The White House and U.S. Capitol, shouldn’t Mr. Radel be more focused on the ongoing issues with the unemployment benefits website that’s negatively impacting Floridians?

Let’s look at some other facts. The Partnership at Drugfree.org tells us that teenagers in America, aged 12 to 17, have:

An obvious point needs to be made: It’s okay for public officials to smoke crack, be publicly drunk and purchase illegal drugs when at work. In fact, they may even get promoted. They may even get a raise. But I guess we get something out of it. I mean, we get to laugh, and they get rewarded, so it must be a win-win situation, right?

In a recent article, “Mayors, cocaine and who we are,” Clinton Yates, a D.C. native and Washington Post online columnist, nails another important point. “It’s a different world now than it was in 1990. Between social media and 24-hour news networks, a white Canadian mayor admitting that he uses drugs is looked at as a source of comedy. In those days, it was a reason to vilify a majority-black city for a drug epidemic that took countless lives. The idea being: look at those people, even their mayor is hooked. Overlooking the obvious public health issue about how drugs, incarceration practices and policing issues affect communities.” And, it’s no laughing matter to anyone whose life has been “legitimately affected by drugs.”

If I got caught smoking crack on the job, I’m pretty certain I’d be fired.

So I wonder what Congressman Radel’s reward will be.

Peter J. Goodman’s first book, Win-Win Career Negotiations, was published by Penguin Books in 2002. He has been featured in The Wall Street Journal, The Washington Post and Publishers Weekly, among other national publications. He is currently earning a Masters of Arts in Writing at The Johns Hopkins University and resides in Washington, DC.