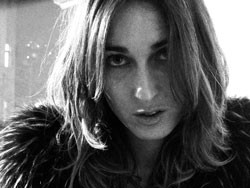 “Don’t underestimate me. If you are inclined to worry, remember that I know what I am doing.” I had left that in a note to my mother and sister.

On the plane I wonder if my father will take me to a hotel or a house.

He is heavier now. Something about his unbuttoned shirt and the soft, hairless chest reminds me of my own body. Our necks seem short or long depending on how much food we eat in a day. When he sees me, I concentrate on enacting the precise movements of a real girl, someone he won’t recognize.

He does not believe my detachment and grabs my head as soon as I am in reach, pushing me against his chest, kissing my forehead, my eyelids, my lips.

“You are with me,” he says over and over.

It’s six thirty in the morning here. The sun is barely out. My father drives a boxy American car with a big front seat and no seatbelts. He asks about my sister and mother.

“I told them where I am. I am not here for anybody but you.” I want to say, or ask, “Is it cheaper to raise a family in France than in America?” Or, “Why did you leave?”

I like to hear him talk, to see if he sounds like a Frenchman now. I want to know what he eats, what music he listens to. At home we are not allowed to play his songs. We eat food my mother thinks looks cute. She says, “Look at this soft, white roll. It’s incredibly tender. Doesn’t it look so cute?” And my sister agrees. We eat small, perfectly-shaped things. Our freezer is full of nuggets, cutlets, patties and sticks. Our cheese comes in squares or triangles, Laughing Cow and Kraft Singles. Perfect shapes have become soothing to us. And if things aren’t perfectly shaped, we make them that way. We have plenty of knives—the kind you buy from TV, the ones that cut through coins.

When I was eight I stood in front of the class. We had to start a sentence with “My dad…” I fainted in front of everybody, hit my nose on a desk and had to go to the emergency room.

I have never been to Paris before. The last thing I hear is that it’s going to be a long drive and not to worry, that he’ll buy me what I need.

The first thing I say when I open my eyes is “sorry.” My father says I look green and should get some sun. I have drooled on my chin. I see a driveway, a house that is white and thin with four green-shuttered windows. “This is Vauville,” he says. “We are in Normandy. This is my beach house.”

He had called to wish me a happy birthday and told me there was a ticket for Paris waiting for me at the airport. I think it’s because I am his favorite. Because of the way I look, a lighter version of him. He used to build things for me as a kid. He made necklaces and earrings for me with his own hands. He taught me to weld, to measure, to tell time. The jewels he made for me were always silver.

Everyone else’s were aluminum, even my mother’s.

The house has not been opened in months and the humidity is salty. I feel damp and uncomfortable, but also cold. There is something dirty about a humid house and I know I will never feel clean here. I open a window, letting drier air in, trying to forget this is temporary. I am here to enjoy him not as a father, but as a man.

Sometimes my sister and I worried there were other girls who looked like us, with thick hair and handmade jewelry, who he liked more than us. We imagined a better wife, a more youthful mother. Someone with nice, soft legs, who played tennis and went topless at the beach.

The paintings on the wall are aquatic: a multicolored school of fish, a print of an ancient sailboat, black and white images of the French Atlantic coast, Vauville in 1890, the beginning of French surfers—blonde, tanned men with boards at their sides. Long, wooden boards—impractical. These pictures have an ironic purpose, I realize. They tell the history of the beach across the street by pointing out that its visitors used to look ridiculous. The surfers are goofy, naïve. Their unitards make them look like they belong in the circus. This is hotel lobby humor, I think. This cannot be in my father’s taste.

He had a clarinet collection when he was with us. He kept it in a glass case against the wall. He bought them, fixed them up and played them for me sometimes—when we were alone or when I was in the bathroom. He called it the “potty serenade” and the lyrics were about peeing, wiping, brushing and cleaning between the toes.

He used to work from home, in a veranda with curtains, three desks, a computer, a fax with an answering machine and piles of rough-paper folders marked with the names of his clients: Tano, Rosa, The Tamarinds. After he left we did not move a shelf or a table in his office. We didn’t lift the cloths that covered his computer or part the curtains in the veranda. We closed the door. The phone still rang some times and the answering machine spoke: “This is Francis Tanjan’s Architectural Firm, please leave a message at the tone.” Sometimes when my mother and my sister were away, I went in there to listen to old messages and took pleasure in how detached I felt from the urgency of his client’s voices. It was like that until my sister and I found out our father was living in Paris. That day I walked into his office. I broke and tore what I could. I wasn’t angry, though.

There is a pool in the yard. It’s clean and looks inviting, but I don’t have a bathing suit. My father gives me one. It’s lilac, a one-piece bathing suit that belongs to his new wife. It’s small on me. The thigh holes are too narrow and the breast part is flat. I imagine her as a starving tennis player, and his children—if there are any—as well-behaved enfants who wear matching outfits with anchors.

I sit outside with him on a lawn chair. He lays his towel down next to mine. I want to tan and not be green so I shut my eyes. I feel my period coming and I don’t have tampons, so I sit very still on the towel. I can’t move or think or make a call. I am alone with my father after eight years and I have nothing to say. I wait for an apology, an explanation. I think this is what he has called me out for.

He asks me if I need anything from the grocery store. When I ask for tampons he blushes. “You have your things?”

When he gets back he watches me eat hard-boiled eggs. He doesn’t seem happy for a daughter who is feeding herself. He looks desperate.

Behind his face I imagine a steep, descending road. It appears as a vast cement flow paving its way to an empty concrete square by the sea. Nobody can alter your moods and thoughts there. All feelings turn into watery particles, dissolving into thin air. You are lifted from responsibilities and are allowed to spend entire days brushing your hair in a marine mirror, caring about nothing but yourself. In this magical square, you can cry and if the sobbing is too convulsive, you can plunge in the water and swim to the bottom of the sea where nobody hears you. But my father wants to hear me. This new man, this older, lazier man lies down on his orange and purple towel, waiting for me to talk. What’s good about doing something if you are going to regret it for the rest of your life?

This is what I ask him. His face comes closer, his eyes more expectant, “You don’t get it, do you?” I look down at my knees. They are very round. “Why I couldn’t stay home with you girls? Why I had to leave and go somewhere you’d never find me?”

He lifts his hand, puts it on the strap of his wife’s wet bathing suit, and tugs at it. The fabric is faded and loose. He pulls the strap down and exposes my breast. He puts his hand around it—it’s fuller and bigger than what he is used to. He takes my nipple in his mouth. A shock shoots across my legs. They get hot. It is the first time I feel this. On the floor he is twisted, letting out excited shrieks.

Chiara Barzini is an Italian screen and fiction writer. She’s lived half her life in the United States. Her writing has appeared in a variety of journals and American magazines including Bomb, Dossier, Harper’s, Noon, NY Tyrant, SleepingFish, and the Village Voice. She currently lives in Rome and is working on a film adaptation of Amanda Davis’s novel “I Wonder When You’ll Miss Me.” Her first story collection, “Sister Stop Breathing” was released by Calamari Press in February 2012.