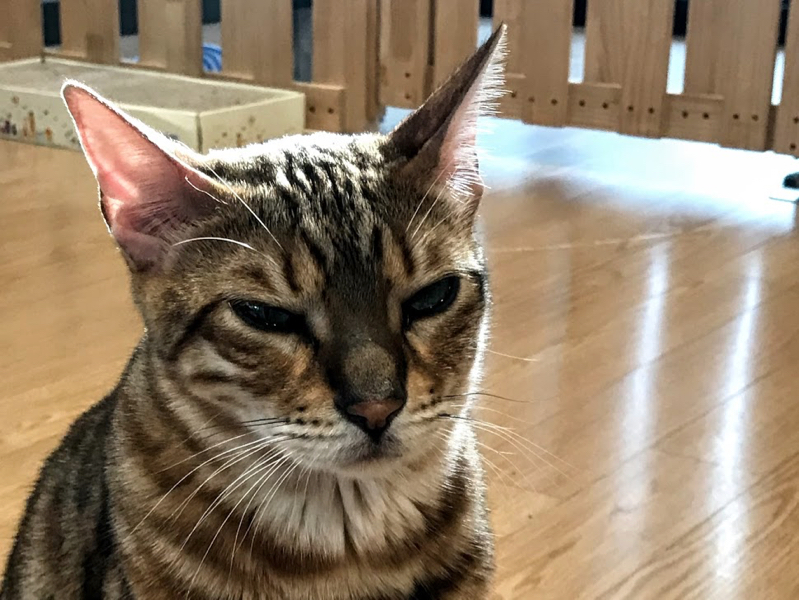 The internet had promised me the “cutest, fluffiest day ever.” So when we saw the sign for the cat cafe while out shopping in Seoul’s Itaewon neighborhood, I squealed. On it, cartoon cats pranced around photos of the real cats waiting upstairs to love us. I turned to my boyfriend with eyes wide and hopeful, and he smiled and nodded, said with his ever-indulging attitude, “We can go.”

I hadn’t had a cat at home for more than a decade. Tiger, who wandered onto our porch as a kitten when I was five, had lived 18 years, jumping on our laps and nudging her cool nose under our hands to pet her. The small engine of her purr, the rise and fall of her contented lungs under my fingertips as I watched TV, my lap warmed by her small life — it had been too long.

I didn’t have my own cat for the same reason many people in Seoul don’t: tiny, tiny apartments. Starting in 2018, when I lived in a 150 sq. ft. box myself, Seattle ranked with the smallest apartments in the country, smaller even than New York City’s.

We peeked in the window before opening the door. The narrow room with the observation window gave off a tone of sanitarium, but cat towers and toys, along with a yellow wall and tables like any other café, livened things up.

As we went in, a feeling surprised me, a feeling I usually associate with strip clubs: excitement mixed with shame about what you’re excited for, all in an environment where the thing you want is manifest simply by your presence there. Like at strip clubs, we paid an entrance fee: 10,000 ₩, about $8.50, which included a coffee drink and a full day of feline access.

In the gated entryway, we slipped off our shoes in exchange for black slippers with white kitty faces embroidered on them. Per the posted instructions, we sanitized our hands from a pump on a liter-sized bottle of clear gel.

The only other participant, a grown man half lounging like a nerdy mermaid on the floor near our feet looked up at us as lazily as the cat he was petting. He seemed like he was here on some kind of long-term work trip and had just been whispering to the cat about how none of his friends liked his Instagram posts.

The attendant, a woman in her 30s, sat behind a computer at a desk with a baby-gated entrance. Two cats sat on stools next to her, as if they themselves were on a coffee break from their regular rotations. We paid our fee, noticing that she also sold cat food as bait for 3,000 ₩. That felt too desperate. I wanted the cats to love me for me. She rang us up, then returned a Bengal hiding back there into the main area, its body falling out of her hands like water out of a bucket. As I admired its black to beige ombre fur, it ambled away.

We turned around and wondered what to do next. Cats lounged on carpeted half-pipes by the panel of windows. Patches of fur poked out of the windows of cat towers. Boxes of toys lay unjingled among the tables.

Music would have helped. The silence gave it the ambiance of a doctor’s waiting room.

I wanted to sit all the way in the back, as if hiding myself. There, taped to a carpeted tower that held a white cat in its innermost sanctum, the same clipart cartoon cats dancing on the poster out front danced across the top of a sign with red letters and a jazzy font titling it “Notice.”

“Don’t grasp tails nor hit the rumps,” it said.

I mean, fair enough, but that it had to be said concerned me.

“Don’t hug and pick up cats by force,” I read, suddenly wondering who I was.

“Don’t touch cats when they eat, drink, and sleep.”

But, what else does a cat do?

“Please wait for them.”

I looked around, at cats lying on their beds, calculating the chances they would willingly approach us, two people they’d never smelled before in what I pictured for the first time as a nonstop string of strangers trying to get some fur.

We had brought books, hoping to recreate days at home reading and cuddling furry friends, and I opened mine now only in a gesture of reverse psychology. My boyfriend cracked open his laptop and dove in, hunched over and typing. My brain couldn’t focus for a full sentence before peeking above the page to see if any cat was not eating, not drinking, not sleeping, and might be construed as approaching.

Fluffy, the white one in the tower behind us, teased us with her soft fur, her eyes opening and closing, as if she knew that as long as her eyes were closed, she was off limits. I’m awake, oh no I’m not, oh yes I am, oops, nope too late, nice try.

I gave up on the focus needed for reading, stood, and picked through the cat toys, a selection of bells, a feather, and something that looked itself like a cat’s tail, all attached to rods, like bait with which to fish for love. I dangled some over Mittens, and she kept her gaze so straight ahead I wondered if she had military training. I combined a feather and a cat tail for what I hoped would be an irresistible combo and flicked it around like a piñata. Any second her evolutionary drives should take over and force her to hurl her body at the toy in a way that was both exciting and hilarious.

After 20 minutes, we started to crack. If a cat wasn’t sleeping, eating, or drinking, we ventured a quick pet of the head, to which the cat usually responded by rising up and walking away, staring back at us with its third eye.

“That one over there bit me!” said my boyfriend, pointing to a cat with ears bent back as if he had held them in that position for so long, they stuck.

“Was it sleeping?” I asked, ready to reprimand.

“No!” he insisted, as if the cat had signed up for this gig and should have come to understand these rules during orientation.

Suddenly, the cream-colored Mr. Whiskers jumped up. In the silence, me, my boyfriend, and the other lone customer watched as he ran to the center of the room. Finally, some action. We all hoped he would start leaping for the jangled feather bait, making us laugh 10,000 ₩ worth of laughs.

But he only heaved once, a pulse shooting up his body, ending in a wet snap that stretched long his neck and open his mouth.

And heaved again, head pushed toward the floor.

Together we three who had paid to be in this room watched the space below his mouth. With one more contraction he flung forth an oatmeal-colored ball glazed with goo. He then darted into a tower.

The owner meandered over, sprayed the floor and wiped it up, folding over the paper towel to dry the floor completely.

We resigned ourselves to standing back and admiring their colors. The Bengal had truly the most stunning eyes I’d ever seen, iceberg blue. As I captured them in a keepsake photo, they stared back at me with a look that said, “I hate everything about your kind.”

Mittens looked out the window, wishing, I imagined, she’d listened to her mother. By the litter box, Princess stubbed out a cigarette under her paw. “Just one more year,” she said to Sassy. “Til I get my degree. Then I’m out.” Behind the litter box, Muffins hit the catnip.

Eons ago, wildcats roamed the Fertile Crescent, now here I was trying to tantalize Teacup with a bell into batting a paw, so that I didn’t just pay $8.50 for a too-sweet coffee and an emotional mélange of rejection and shame, enjoyed amid the enclosed scent of a half dozen litter boxes.

We resisted calling it and admitting defeat, or naiveté, or the fact that we should have known, with all previous intel we had via so, so many memes about how aloof most cats are to their own loving families, that this would obviously have been a terrible idea.

Then the children arrived. Two of them, bouncing in the holding area with an innocence I remembered from half an hour ago.

The gate opened. They ran in. They did not read the sign.

Cat fishing poles waved in cat faces. Sleeping cats pet roughly. Cats hugged without consent. Their mom paid for cat food, and they held it out for the cats to come near, like total cheaters, free to enjoy that childhood innocence about how much animals hate you.

We got a little more brazen ourselves. I reached my hand into the cat tower, to Fluffy’s white fur, and I pet Fluffy without Fluffy coming to me.

I got what I paid for. I nodded to my boyfriend.

We sanitized our hands on the way out.

Photo at the top of the page is by Paulette Perhach.

Paulette Perhach’s writing has been published in the New York Times, Elle, Slate, Cosmopolitan, Marie Claire, Yoga Journal, McSweeney’s Internet Tendency, and Vice. Her book, Welcome to the Writer's Life, was selected as one of Poets & Writers' Best Books for Writers.