The restaurant perched on a hill overlooking the ancient city of Jerusalem for miles around, a deep ravine below. The pomegranate blossoms were in their first bloom. A goshawk circled the mid-morning sky. The restaurant’s architecture was reminiscent of Fallingwater, with its monolithic concrete slabs, the way it had become a part of the landscape. Its patrons enjoyed unobstructed views.

The quake shook the foundation of everything. The people sitting at the farthest end of the perch were the unlucky ones. Yaakov was one of them. He had been having breakfast with Aga. His eyes had watched the moving solar patterns on her face. The sun was brilliant, but the architect, a disciple of Frank Lloyd Wright, had been very clever to add tinted glass all around, so that no one ever need squint . It was a popular establishment. Yaakov often came for breakfast with Aga and Max asleep in his stroller that morning. Yaakov brought them there regularly, almost every day, and he knew all the regulars. They could walk there, but because of the stroller and the steep hill, they drove.

The waitress brought out the coffee, rich and black. Aga looked over at Max a few times. She was happy again. Though the baby’s father had left, in Yaakov she had found the perfect mate to take a father’s place. He had proposed just last week and she had said yes. Yaakov was very different from the baby’s father. That had been an affair of the heart, passion-filled and short lived, fizzling out after a few months. Yaakov was different. He was ready to assume all responsibility, the role of husband and father. He had a hunger, not for fulfilling any lustful appetites, but for a family, a ready-made arrangement. And he was so thankful. She was the one who should be thankful. He was so busy, such a devoted scientist, and yet so agreeable and ready to make room for them in his life. They were set, she thought; and she thought she was happy.

She kissed Yaakov goodbye and watched as he kissed Max’s forehead. They left for her Mother’s. Yaakov remained to finish his coffee and read the paper.

Yaakov hung on for dear life. Think positively and the outcome will be good. A pomegranate blossom brushed across the back of his hand, he struggled to hold on more tightly to the rail bar. He thought of the hard ground below and how it would slam the back of his head when he hit it after the fall. Next door on another perch, he saw an image of another man. He was not sure if it was a mirage. The other man was in the same precarious position, holding on for dear life. Below him, the tops of tall trees could cushion him if he fell. Suddenly the man raised his left hand and pulled himself up, over the railing which was grounded in cement and still sturdy.

Yaakov’s strength was leaving him. He gave a shout which rang out into the blue and cloudless sky. The ancient city was far away and beautiful, shimmering like a bride. Jerusalem in the back yard, people said.

The sirens, crashes of falling concrete and metal. A chunk fell into the ravine and into the gorge. Yaakov lay, his back broken over a boulder, his head and right hand atop the blooms.

But peace it was that was to be had. He would try to tell this in some way to wives and women in parks and at cocktail parties, and they would have a laugh of it and giggle at his expense. He could always tell which ones secretly relished it, which ones knew he spoke a truth.

Yaakov used to be restless. People around him knew not to bother him with pettiness. He was often impatient and never bothered with slow minded types. He would leave his desk at noon and walk absentmindedly for an hour or sometimes longer, his hands in his pockets and his head always down. But then he would return and do better work. The Ph.D student carried on and did not ask him any questions until he saw him settled into his task. The student didn’t know that once, on one of his walks, Yaakov stopped and sat in a field, observing the rocky, cobalt sky, looking at nothing.

Aga and Max would visit the lab and wait in the hall if Yaakov had gone out on his walk. The lab technicians knew her well, the stylish wife with her long riding boots and turtle necks and thin waist and fine hips. Sometimes they played with Max and let him see the caged white rats in the separate room. Aga did not like to go there herself, but Max loved it. She had studied chemistry and lived in Paris for two years where she studied at the Sorbonne. She spoke masterful French.

Her first visit to the lab, the student was the least bit interested in greeting her or Max, steeped as the student was in an experiment with a rat on the dissection table. Pancreatic effects of a diabetic cure. He hardly looked up to answer her query as to Yaakov’s whereabouts. He grunted a reply. So she stopped asking, and with Max at her hip, cheek to cheek to keep him stimulated and thereby quiet, she walked around with ease, peeking into offices and hallways and stockrooms. Then she waited on a large wooden bench in the corridor and played peekaboo with Max or walked him with both hands held up for support. Yaakov walked in within the half hour, his face brightening on seeing them, especially on seeing Max.

“Ah! How is my Max? How is my little Max?” Yaakov was always well-received by Max, who usually sat drooling on the carpet with four fingers in his mouth smiling. Nothing he could ever do was wrong.

Weeks and many visits later, she walked up the steps to the lab and the student stood in the corridor, looking out of the large windows, preoccupied not with an experiment, but with thought. He said hello and held his gaze on her, and studied her. His eyes swept over her body, lingering at her breasts and then her hips and legs and up again slowly to her lips and finally locking with her eyes. He took a slow puff of his cigarette. Max’s arms slammed her hair so that wisps of it fell on her face, but she did not move, nor did she look away. It was an invitation.

He began visiting her daily during the lunch hour, driving the short distance to her and Yaakov’s apartment at the far end of the campus. Afterwards, he would drive her and Max in time enough to see Yaakov after his walk.

Somewhere not long ago, Yaakov had been with his most favorite person, a tall woman of slight build, someone who had cherished him it seemed, forever. He could not recall her name now, in the mist. She swelled up to ten times her size, and he saw only a face beckoning, sweet sounding as from forever. She was lovely, and he felt he had been with her all his life. A theme from nowhere, a song, a great something, played from way off to the left of him, as if a grand festival winding down, faint yet audible. He could feel no goosebumps, though he felt they should be there. A lady with whitened hair like a cloud walked toward the song, walked as if in the back of his mind, an old woman with glasses, her hair short and wavy, white as a cloud, and an old white cardigan about her, walking with an old ease, an old vigor, a tested exertion. She was behind him but he did not turn around and he did not stare but he knew she was there and going past him toward the music. The sidewalk was narrow and almost a foot off the street. He stood in front of a periwinkle house, waiting for something. He tried to remember what it was, and failed though he did not struggle too much. But the notion of waiting remained. Good. Good. Wait. The sky was colorless. His own blanket he pulled around him and there was not a bed for him to fall into. He did not know how long he had been there nor how long he would wait, but that strangely did not bother him. He had no more memory, only words only labels only whatever was.

It was quiet now, down in the ravine. The goshawk kept close watch, then soared silently above the trees.  Some people lay crushed beneath the rubble. 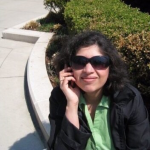 Vimi Bajaj is a writer living in Chicago. She is a graduate of the Bennington Writing Seminars where she earned an MFA. She is currently at work on a novel set in India.