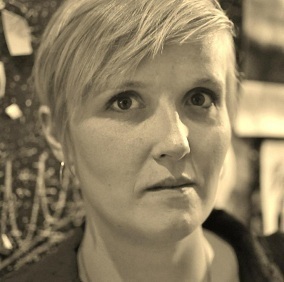 Chicagoan Jac Jemc’s writing has been described as haunting and heartbreaking, intimate and extraordinary, and also familiar yet strange. She reveals her characters through quirks and inner flaws, and brings a humble sense of clarity to the page as she portrays human relationships. Jemc was recently named by The Guild Literary Complex as one of the “25 Writers to Watch.” Her debut novel, My Only Wife (Dzanc Books, 2012) received many honors and awards including a PEN nomination, and her nonfiction was featured on the long list for Best American Essays 2014 . Jemc’s first collection of stories, A Different Bed Every Time, is forthcoming from Dzanc Books in October 2014. And aside from writing fiction and essays, she’s a poet, too, and Jemc is also an editor for two different literary journals. Here, Jemc discusses her past obsession with naming characters, how writers need to at times get out of the way of their writing and allowing the action to happen, and what one should do with all of those damn rejections.

Chelsey Clammer: In your first book, My Only Wife, the central character of the novel, a husband’s only wife, is described through his observations of her. The reader never learns her name as she is only addressed as “my wife.” In the past, critics have discussed how by not naming a female character, she can be seen as unimportant to the story or as a generic character of sorts. How do you think My Only Wife works against that?

Jac Jemc: I don’t think I realized that critics had discussed the wife being unimportant because of her not being named! I probably have selective memory. Ha! No one in the book has a name, and I think that was more a product of a couple things. For one, I was obsessed with names as a child. I had a very strange habit of copying out a baby name book over and over by hand. Probably a dozen times? I invested a lot of value in names, and it’s taken me a while to get some distance from that obsession. After My Only Wife, I went toward strange patterns of naming: all of my characters were named after birds, or given a name that was chosen entirely randomly – something that still kept the naming of a character from being intentional. We all have our hang-ups, I guess. So that’s one reason the characters in My Only Wife don’t have names. Another is that the book was really built on the repetition of “my wife.” It’s how the book started for me and it’s what kept pulling me through. It’s a meditation, a prayer that passes through stages of grief: “my wife,” akin to “my god.” There’s harm and trouble investing someone else with such universal power. I see what you’re saying about reducing a female character to a term that combines a possessive pronoun and a descriptor that implies a partnership, though. In that regard, I think a lot of the book is the narrator processing how there could be nothing farther from the truth than that descriptor.

CC: Earlier in your writing career, you ran a website called The Rejection Collection, in which you posted and commented on the rejections you received from literary journals. What sort of response did you get to your website before My Only Wife was published? Is there a different response to it now?

JJ: I’m still running my rejections on there! They’ve slowed recently for a couple reasons. One is I’ve been working on longer stuff, so I’m not sending out as much, so there’s less to post. Another is the very incredible boon of people asking me for work, so that when I do have it to share, I already have a magazine that’s interested in featuring it. That said, I have started to send work out to a handful of publications I hold in high regard recently. I’m interested in running that litmus test as to where I stand quality- and style-wise. People have always been very positive about the website. I don’t know that the response has really changed around My Only Wife’s publication. In general people seem happy for transparency and honesty – or at least the people that are talking to me say that. I’m sure there are people that hate it, too.

CC: Thinking again about the narrative structure of My Only Wife, what was it like to create a female character through a man’s observation? Were there any gender stereotypes you drew on or avoided in order to create those characters? And in what ways do you think gender stereotypes can weaken or perhaps strengthen characterization?

JJ: You know, I don’t think I actively thought about gender stereotypes much at all while writing this. I didn’t think, “I’m going to describe this character with a man’s voice.” I don’t know that I even invest their genders with much weight. I don’t see any reason that some nouns and pronouns couldn’t be swapped out, and it becomes a story of two women or two men. Maybe I’m naïve? I guess, looking back there are a handful of details about the wife that might be viewed as quirky or romantic because she’s female. If a male had the same characteristics, they might be less traditionally appreciated, but that’s me putting on my projections-of-the-general-populace goggles, and I’d prefer not to put those on.

On a related note, in the midst of working on something new, I watched True Detective. While I loved the show, I really reacted hard against the high quantity of women victims in the show. I had a moment where I thought, “Fuck this. I’m rewriting what I’m working on so that anyone that shows any form of weakness will be a man.” I had this moment of, “I can fix the world. If we see less women weak and victimized, there will be less women weak and victimized.” And I know people say, “But women are more often victimized, so it’s truthful to portray that, and besides, the show is criticizing that treatment of women,” but in my mind, I keep thinking of that Geena Davis thing about how the large majority of people in crowd scenes and minor roles in tv and movies are men, a disproportionate amount, and if we just started tipping those scales in the favor of women, we’d start to truly believe that women have more authority and more of a stake in the professions that they’re never playing in the media. I know it’s not that simple, but by gosh it can’t hurt. I think a lot about how all of this subliminally affects us. I try to pay attention and make the improvements where I can, but if I let myself obsess over it too much, I get paralyzed. I read a lot and try to be informed and base my everyday living on this stuff, but for fiction writing, I try to let all of that seep in naturally and get out of my own way.

CC: Identity is a common theme addressed, analyzed, studied or at least poked at in just about every book in existence. What do you think are some of the key factors a writer should pay attention to while developing a character’s identity?

JJ: I don’t know that I’m a great person to answer this question. I let chance guide a lot of what I write, and I hope that identity comes through based on the action and decisions characters make. I know I often use the thoughts of characters as a crutch, and that goes a long way in terms of defining who a narrator or character is, but it’s something I’m actively working on: allowing action to happen that provides a firm grounding for any internal musings.

CC: Recently, you were named one of the “25 Writers to Watch” by The Guild Literary Complex. Bravo! Who do you think are some of the writers to watch?

JJ: There are so many people I am excited about! Curbside Splendor has really been killing it for me in terms of new talent: Sam Irby, Megan Stielstra, Susan Hope Lanier, Halle Butler, Tim Kinsella, and Chris Bower. They are just snatching up talent left and right. I hope they make all the money there is to be had and keep doing exactly what they’re doing.  I’m also so, so eager for Allison Gruber’s essay collection to come out this winter. I’m extremely excited about essays right now. I know people are talking about them experiencing a renaissance right now, and I don’t know that the world at large knows this or if it’s just the trend in the literary community, but by golly, I read The Empathy Exams and it floored me. I can’t wait for Roxane Gay’s essay collection. Eula Biss makes my heart go pitter patter, and she has new nonfiction coming out this fall. There is far too much to be excited about.

CC: What are you working on now?

JJ: I’m working on a novel – sort of a haunted house story that dives into how we believe to be real what we believe to be real, and what happens when reality we’ve previously tied ourselves to gets scrambled. I’ve obviously gone at the idea of haunting in a more indirect way before, but I’m aiming straight on for it this time. In addition to the redrafting of that project, I’m trying to work on some new stories and I’ve been very slowly adding to several different essays on various topics. I don’t think I know how to write nonfiction, but I want to learn, and I’m going about it very carefully, which is unusual for me. I’m usually much messier with my attempts.

Jac Jemc’s first collection of stories, A Different Bed Every Time, is forthcoming from Dzanc Books in October 2014. Her novel, My Only Wife (Dzanc Books) was named a finalist for the 2013 PEN/Robert W. Bingham Prize for Debut Fiction and winner of the Paula Anderson Book Award. She is also the author of a chapbook of stories, These Strangers She’d Invited In (Greying Ghost Press).  She is the poetry editor at decomP and web nonfiction editor for Hobart.