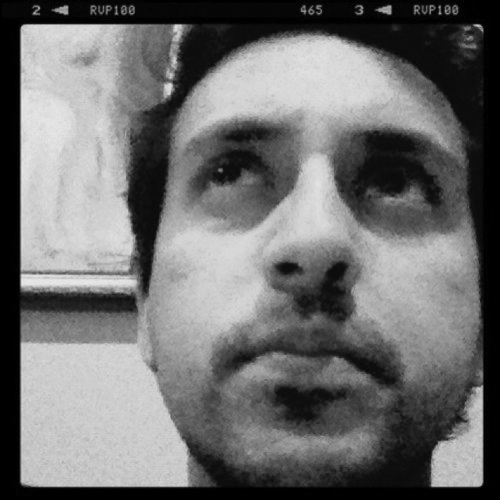 I watched a marshmallow melt in Madrid. It occurred to me that I had seen the same thing happen once in New York. A crowd of tourists huddled around it outside the Empire State Building and snapped pictures. But in the square of Plaza Mayor no one cared. Maybe because it looked so different there, in that space.

I fell in love with a dancer at Carnival. The samba music blared. Scores of dancers paraded the streets. This woman took my hands and placed them on her swaying hips, her sparkly swaying hips. She smiled, her mouth curving dimple to dimple. That someone here could smile at me, a foreigner, like that in a throng of people all dancing without worry or concern, troubled me enough to let her go. She disappeared in the crowd.

When I moonlighted as a security guard in one of those northern states no one really has a clear picture of, maybe New Hampshire, an apple struck my forehead and knocked my hat off. A small boy, waiting for his father to complete a deposit, laughed as the wet residue began to crust. We were the only witnesses. I was never much in the mood for retribution, but the question of the apple bothered me. The kid was long gone, but the half-bitten apple remained, browning on the marble floor next to my shoe, my black shoe, my black polished shoe. And no one said a thing about it, not another customer, or the manager, and the thing continued to rot. I never went back there, but sometimes I think about it.

Later, I was asleep on a Greyhound traveling to Montreal. My neighbor, unable to sleep, woke me, desiring to share his restlessness. He held a samurai sword in his hands and spun it with his wrists, gripping the handle, the white handle. “You ever hear the story of the man who went crazy on one of these things?” he said, speaking from the side of his mouth. We were passing through upstate New York. Behind the smudged window, trees and the shadow of more trees behind them lined the highway. “This guy goes nuts and starts hacking up the guy next to him with a machete,” he said, pointing the blade at me. “The other people on the bus freak out. Driver pulls over across three lanes of traffic and they all run out screaming. They watch helplessly as this guy hacks and hacks until all that’s left behind is a puddle.” When I asked him what happened next he shrugged and said, “They cleaned up the puddle.” I told him that wasn’t what I meant. “Yeah, yeah,” he said, “I think the police shot him.” He leaned against my shoulder and closed his eyes. “That’s why I carry this,” he said, letting the sword rest against the seat in front of him, “for protection.” I never reached Montreal.

The day they shot Bhutto I stubbed my big toe in a motel room. Roaches skirted from under the bed, afraid.

I was walking on a beach in Malibu when I decided to lie down for a spell. I must have been tired because when I woke up I found myself in the ocean, the Pacific Ocean. Days passed and the nights were the darkest I had seen. Drowning should have been a certainty, but something kept me afloat, something related to a growing pinch that spread the length of my entire back, but I was too weak to feel what it was. The thirst dried me out from the inside, withering my flesh. The rain saved me. Drops, little raindrops, fell into my mouth from the clouds above. The waves crashed, yet I remained propped. For a time I thought this would be my new life, a man merged with the sea, forever traveling, alone.

I don’t know how it happened. All I remember was waking up on a shore, surrounded by women with skin the color of coconut shell. A little girl poked me with a stick, trying to discern just what I was.

They picked me up, their small, roughened hands encircling my even smaller arms, and led me to a fire pit. Stacked on the pit were hundreds of crabs, their shells baked soft. The girl poked my back before she pointed to the fire. For the first time, I felt the imprints on my back. She took me closer. The heat felt familiar. Leaning down, she skewered one of the crabs and gave it to me. I chewed and the juice dribbled down my chin. The women crowded the pit, eating the crabs that had saved me. They laughed and feigned understanding when I tried to explain my story, but they weren’t very interested. Finally, I laughed with them. Nothing about the place felt familiar. A part of me felt the urge to leave, but I was so tired. The little girl offered me another crab and I bit into it, relishing the taste of my savior.

Ajit Singh Dhillon is a third year MFA student at the University of South Carolina. He is the fiction editor of their literary journal, Yemassee. Currently, he is at work on a novel set in New York in the days leading up to the financial collapse.

Ajit Singh Dhillon is a third year MFA student at the University of South Carolina. He is the fiction editor of their literary journal, Yemassee. Currently, he is at work on a novel set in New York in the days leading up to the financial collapse.