Sylvie was six when she started smoking American Spirit Lights. It cut the bitterness of long afternoons cleaning other people’s toilets and making their beds. The drawback, of course, was that she often had the jitters the next morning at kindergarten. It was No Smoking there, or learn the error of your ways at the back of Mrs. Shepherd’s hand. She never left marks, but she left plenty of scars.

This was Sylvie’s second year in kindergarten, and she felt awkward among the smaller kids playing blocks or practicing their motor skills with construction paper and blunted scissors. Sylvie had little patience for blocks. Usually when playtime came she would stand off in the corner and watch, fingers veed to accommodate an imaginary cigarette. Imagination was the key to a happy life, her mother said. “You have to imagine those aches in your back are not real, imagine that your knee cap is supposed to move like that, imagine the lady you work for actually gives a fuck whether or not you are deported.”

Of course there was no danger of Sylvie being deported, since she was born in this country, but she understood Mama’s point. You had to imagine other people cared about you the way you cared about yourself. Otherwise, what was the point of dragging yourself out of bed each morning, walking to kindergarten, putting up with Mrs. Shepherd, doing an eight hour shift of housework, just to come home to zap a burrito and go to bed? You had to imagine all that effort mattered, that it would carry you somewhere in the end. Some days it was hard. Some days she even had to imagine Mama’s love. Mama never came home before ten, and sometimes she would bring a man. The grunting and sloppy laughter would keep Sylvie up all night, and make the next day even worse. She smoked a full pack of American Spirit Lights on those days, and it cut into the money she could put toward their rent.

Lately, Mama had been seeing a bricklayer from the barrio, a man with one good eye who yelled and slapped when Sylvie was slow to bring his beer. Sylvie couldn’t wait for this one to go away.

When she arrived home one day to find the apartment bricked in—bricks in the windows, a brick wall blocking the door—she imagined Mama was in there, happy at last in the castle she had built with her own industrious hands. This was what it was all for, this time of construction at the end of endless days of labor. A part of Sylvie wished her mother had waited until she got home to build her walls, but wishing was not useful. Wishing was like stabbing a classmate with blunted scissors. It might leave a mark, but wouldn’t penetrate reality.

And so, Sylvie sat on urine-stained carpet in the hallway and scrounged through her purse for the last pack of American Spirit Lights. She tapped the final cigarette from its dented maw, and lit it with a trembling hand. The first puff calmed her jitters. The second, she drew deep into her lungs, and held it there while daylight slipped slowly away from the pane at the hallway’s end. It came to her that even though there was a brick wall between her and her mother, there was really nothing separating them at all.

Stephen V. Ramey lives in New Castle, Pennsylvania. His work has appeared in various journals, including The Journal of Compressed Creative Arts, Microliterature, and Connotation Press. He believes in persistence. 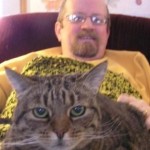 Stephen V. Ramey's work has appeared in various places, including The Doctor T. J. Eckleburg Review, The Journal of Compressed Creative Arts, The Journal of Microliterature, and Daily Science Fiction. He lives in beautiful New Castle, Pennsylvania, where the fireworks are always wonderful. You should visit sometime.