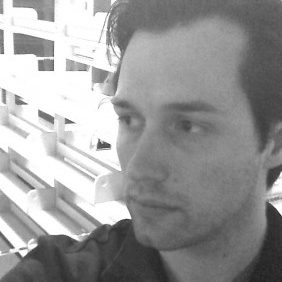 A pervert was said to be in our midst. We looked about us—there were many of us, perhaps as many as thirty—and seeing, as if for the first time, each other’s faces, which now seemed crazed and mutated, we began to grope each other, quite inexplicably, though as would befit revelers at a bacchanal. And so, it is believed, that in our heightened zeal the alleged pervert made a quick getaway.

Several years ago my brother who, by all accounts, is not a well person counted the squares of the carpet that leads from the stairs on the thirteenth floor to the door of his apartment. He said he counted the squares instead of going to work, but had finished counting the squares—eleven thousand and forty—before noon, at which point he considered going to work but was too fatigued to do so, so instead he went into his apartment where he slept until my arrival. When he told me his story, I wanted to know how many diamonds it was he counted in the hallway. Even today he will not acknowledge me on the grounds that, despite our relation, we have never seen eye-to-eye on the most basic of questions.

Joey and his wife, Hortense, looked about themselves in utter confusion. It was a domicile of sheer terror. “Nothing to eat,” cried Hortense, her face downcast. “I am trying my best!” said Joey, and kicked the lone wall of their apartment stubbing his big toe so that he hopped. They looked about the place, at the outside world. They were completely naked. “Please publish your poems,” pleaded Hortense, whose breasts were available for even the men who screamed to them from the ice cream trucks. “OK, I will—just for you,” muttered Joey. An ice cream truck raged past, and the words of the driver caused his wife to burst into tears of boredom. His shoulders slumped with deep melancholy, and sexual desire. “You must, please, Joey—do it for me! Do it for me, please!” Hortense cried against the wall until night swallowed them whole. Joey eventually did get around to publishing his poems. He was surprised and happy that they were well-liked and made him famous. So the couple went into the city for the first time in what seemed years. It was the first time they had left their quarters in what had seemed years. There in the city they bought a tiny bird, to whom they ridiculously attached the title, Monsieur Goldman.

I went to a sage because I could not remember how to live among ordinary men. After placing a few coins in his servant’s hand, I sat and awaited his response. “You have three options, as I see it,” he explained. “You can learn anew how to live among ordinary men, but I seriously doubt this can be done. You can kill ordinary men, thereby eliminating your issue, but again, I seriously doubt this can be done. Or, finally, you can put an end to yourself. By putting yourself in such a terrible spot, however, my friend, you realize, I should hope, that you have given up your right to be free.” He filled me with earth and lay my organs beside several flat, weathered stones. The stones were so old, I noted, that to handle them, even with extreme caution, would be an atrocity, something which, though potentially fatal, would not be that much worse than small talk.

The End of the Journey

At the end of the journey we entered the castle, all of us, except for Fat Otto, who was forced to stop at the gate which though narrow could have provided passage to all of us including Fat Otto, who had struggled and persevered for many months, even more so perhaps than any of us; we were duly proud of him. Unfortunately the Emperor detested fat people, so Otto who was clearly fat could not come in.

When a hyena is constantly wounded, she wounds others with her walk. A hyena is usually wounded on the continent of Africa where she is always choosing what she herself will wound with her gait when she catches up with it. A hyena, because she is constantly stalking and since she is always wounded, does find eventually what she herself was searching for, like when the thing she was coming for is completely dispirited and tired from a long chase. And sometimes the thing she comes for does not know the hyena was wounded at all in the first place or that it itself was being chased after at all, and now finds itself wounded on the continent of Africa, which it has never left once, thirsty and completely alone, and now with a hyena who would just love to talk about the fact that it has been a very yellow day and now she would love to talk over a drink of murky water.

When one says so-and-so has offended me with that act, one is really saying: “He has offended me with his hideous and terrible taste.” The proposition that everything boils down to one’s aesthetic sensibility struck me as right the other day, as I watched a woman walk down the avenue in a part of town that was quite affluent, while she, this person, was very destitute. And she, this destitute person, was screaming again and again that so-and-so had ruined her life—“So-and-so ruined my life; she ruined my whole life!” Suddenly I was assailed by a terrible image, the image of the afflicter approaching this destitute and ragged person, overpowering her in her own impoverished neck of the woods and forcibly taking her—blindfolding her even—and finally transporting her to this rather affluent place where we were both now standing, leaving her here, thus displaced, I thought, “Yes, perhaps it was in this exact way that her life was thus destroyed, as she claims it was, as she vomits the same words out, again and again, for she truly is out of her element, and so (understandably) highly offended by this place which is really at odds with her taste and sensibility.”