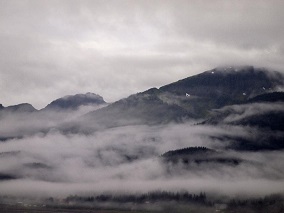 “The Son of Rainy Mountain” is a piece I began just after I moved over a thousand miles north from Juneau, Alaska to my home now in Barrow. The contrast between Arctic Alaska and Southeast Alaska struck me deeply: Barrow has the stark beauty of endless tundra and a frozen ocean while Juneau is a place of mountains, green, and constant rain. When I missed Juneau, it felt like missing an entirely different world: trees, wind storms, rain, and the smell of wet earth. Compare that with Mt. Juneau towering over the town, wreathed in patches of fog like the floating island in Gulliver’s travels and you have a pretty surreal image of the place you used to live.

I have always been fascinated with rural Alaska. It is difficult to get around since there are no roads, so the feeling of isolation is a unique experience. Places you have heard about less than 20 miles away take on an almost mystical quality. The waterways in Southeast are speckled with ruins of old camps or strange, unexplained buildings stranded in the wilderness. The town of Rainy Mountain is drawn up from such stories of quiet, forgotten places. Having lived in isolated, rural Alaska for a few years now I have collected all sorts of old stories and histories that seem to carry with them that magic of the “almost forgotten.” In many ways, these are the images from which “The Son of Rainy Mountain,” is drawn, mixed with details borrowed from my former life in Juneau. A friend of mine living in his hammock up on Mt. Juneau used to rub his feet with of lavender oil in order to ward off trench-foot from living outside in the rain, and it was this detail that first inspired the story.

It is difficult for me to know how to talk in depth about my process as a writer and my craft. Whenever I’m asked about my writing I find it suddenly very difficult to express myself. Writing to me is very personal, as I think it is to most writers, and talking about it in intellectual themes often feels to me like I am trying to explain away a magic trick when I do not completely understand the secret.

I have been writing since I was very young, but it wasn’t until I encountered mentors in college that I really developed a true process my work. When I attended the University of Iowa I used to rob the boxes of the graduate students at the Iowa Writers Workshop in order to read their stories. I eventually worked up the nerve to enroll in fiction classes taught by them and a few of their teachers. A few who come to mind are Jeffery Snowbarger, Elinathan Ohiomoba, and Pulitzer-prize winning author James McPherson, who is one of the kindest and most encouraging teachers I have ever had. Though they were all wonderful, my instructor the fall semester of my senior year, Matthew Neill Null, undoubtedly had the most impact on me. His dedication to his class, his craft, and to me as a student came at a time of great need for me in my life and my development as a writer. Without him, my other teachers, and the wonderful friends I have had read my work throughout the years, I don’t know what kind of writer I would be today.

Living in Barrow has proved interesting in for my writing. There is something to be said for isolation, it keeps you desperate and hungry, but in the end that can prove overwhelming. I have few other writers to talk to, no coffee shops to sit in, looking pensive and writerly, and no bars to jot down notes in late at night. I live in a native Inupiaq whaling village that is frozen 10 months out of the year and polar bears are more frequent than poetry readings. It is, at the risk of sounding pretentious, the potential of undiscovered stories that keeps me writing. These communities are fascinating, the landscapes unparallel, and in the same way Juneau and Southeast Alaska inspired “The Son of Rainy Mountain,” I am certain Barrow will inspire its own stories.

Mirri Glasson-Darling lives in Barrow, Alaska: the northern most community in the United States. Prior to living in Alaska, she attended the University of Iowa where she was fortunate enough to have such instructors as Pulitzer Prize-winning author James Allen McPherson. She is an editor for Ilisagvik Tribal College’s debut literary journal, Aglaun and currently working on a novel.  Her writing has appeared in such literary journals as Bosque and The Birch. You can follow her on twitter @MirriGD.

2 Replies to “Writing in Alaska”