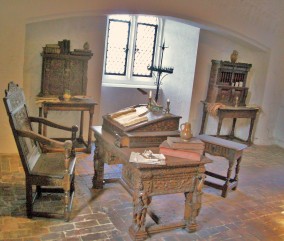 “Oh, what a good time I had in prison.
You really ought to serve a prison term!”
Fyodor Dostoyevsky, letter to his brother

The medieval heavyweight, Dante Alighieri, started his legendary Divine Comedy in Hell. Then he ramped up (less convincingly) to Purgatory and Paradise. Like his predecessors, the Supreme Poet composed his trilogy as an expat. “You shall leave everything you love most: this is the arrow that the bow of exile shoots first,” he was told in Paradiso. But proving he didn’t love Florence so much as Beatrice, he refused to pay a fine for return to his hometown. Instead, the Father of the Italian language, who moonlighted as a drug and elixir dealer, remained abroad till the bitter end when Pope John XXII burnt his lesser blogs and Tweets.

By that time The Tower of London had launched its own MFA Pen program that, in ensuing years, turned out more masterpieces than Iowa, Irvine, or Yaddo. Sir Thomas More was accepted into the exclusive retreat in 1534 for rejecting Henry VIII’s Act of Supremacy. Here, before being relieved of his stubborn head, he penned the Dialog of Comfort Against Tribulation. Not only do leg irons, hair shirts, and scurvy inspire the fickle muse, but, as More showed, writers — procrastinators all — work best under a deadline.

Later, Sir Walter Raleigh was admitted into the Tower program for plotting to assassinate Henry’s grandson, the witch-hunter James I. So bracing did Sir Walter find the atmosphere that he stayed for thirteen years and almost finished a complete world history. While laboring on the final chapters, he witnessed a murder outside his barred windows; then, on hearing two completely erroneous accounts of the incident by other eyewitnesses, he burned his history. He was paroled on a foreign study junket to El Dorado, but ran afoul of the Spanish in a real estate deal. So, like Sir Thomas, Raleigh parted company with his head as well as his beloved tobacco box inscribed: “It was my companion at that most miserable time.”

A creative groundswell ensued. Soon, John Bunyan released his Puritan self-helper, Pilgrim’s Progress, from behind bars. Then came the jailbird masterpieces of Penn, Villon, and the Marquis de Sade.

Across the Channel, Voltaire was thrown in the Bastille twice, the first time for lampooning the Duc d’Orleans, the second in a case of mistaken identity. But it afforded him eleven uninterrupted months to compose his hit incest drama, Oedipus. Later, under the pseudonym Doctor Ralph, he barely escaped a third stretch for Candide, which sold 30,000 copies in a year with its tart communion sacrileges such as “Let us eat a Jesuit!”

Another smart aleck, Daniel Defoe, was imprisoned for his 1703 blog, “The Shortest Way with the Dissenters,” recommending that all nonconformist preachers (of whom he was one) be hanged. Barely escaping the gallows, he was pilloried and pelted with rotten vegetables. After three days in the stocks, the author of Robinson Crusoe was taken to Newgate Prison the alma mater of duelist killer, Ben Jonson, and rapist robber, Sir Thomas Malory. The nostalgic Defoe would later send his heroine, Moll Flanders, to Newgate.

A century hence, Victor Hugo, a free press activist, moved by the plight of beggars and cathedral hunchbacks, called Napoleon III a tyrant and traitor to France. Then he caught the next carriage to Brussels where he communicated with the dead in séances. Slipping across the Channel, he spent nineteen years writing Les Misérables about a fugitive bread thief. On return to the motherland during the Prussian siege, the novelist survived on animals given him by the Paris zookeepers.

Meanwhile, Russia was kicking its own leftist novelist relocation program into high gear. Irking the Tsar with populist rants, Alexander Pushkin was exiled to the provinces. Then the Father of modern Russian literature was put under house arrest at his mother’s country place. Here he continued to write, but forbidden to publish, and found time to fight twenty-nine duels in defense of his honor. Emperor Nicholas gave him a lowly court title in order to birddog his teenage wife, Natasha, a Cossack bombshell. Finally, Alex was remaindered in a duel by Natasha’s other suitor, her brother-in-law, a French playboy.

Turgenev was exiled to his country estate for eulogizing Pushkin’s successor, Gogol, another hothead and unrepentant rabblerouser. At the end of his life, Nikolai was working on Dead Souls II. The first installment had earned him kudos. But now, having found the Lord, he worried that a sequel might earn him a place in Hell. So he burnt the manuscript, explaining to horrified colleagues that the sacrifice was a joke played on him by the Devil himself. Then he took to bed and stopped eating. Vodka was poured over his head and leeches applied to his nose. Even so, nine days later, Gogol stopped breathing, though rumors persist that he was buried alive. [1]

Meantime, Nikolai’s ardent fan, Dostoyevsky, was doing five less comfortable years in Siberia which turned him from a leftist to a Tsarist. On release, but still under police surveillance, he self-exiled to Switzerland, but complained, “I can write nothing of value in this country.” Returning to the motherland, he cranked out his masterpieces. He jeered at Turgenev for living happily in Europe now, suggesting he spy on Russia through a telescope to regain inspiration, if not national pride.

After his mock firing squad execution, a stretch in the pen, then four years on a Siberian chain gang, Fyodor told his brother: “Prison saved me… I became a completely new person.” He had learned that “to be a man among men… not to allow oneself to be broken, to fall – this is life’s goal and meaning.” He feverishly set to work on his Gulag memoir, saying, “Nobody yet knows the extent of my powers or the scope of my talent.” The House of the Dead, an instant hit, revived his reputation. “My name is now worth millions!” he wrote. [2]

In 1905, Gorky did his own stretch in Dostoyevsky’s alma mater, St. Petersburg’s Peter and Paul Fortress. In the last eight days of his sentence he finished his play, Children of the Sun. During his more comfortable dacha house arrest thirty years later, the revolutionary activist, now a celebrity, didn’t get anything done because Stalin and everybody else was dropping by to pay their respects before poisoning him.

Having discovered how to get the best out of their geniuses, the Russians became increasingly conscientious about incarcerating them over Kafkaesque offenses.

In ’44, Stalin sent Alexander Solzhenitsyn to the Gulag for “disseminating anti-Soviet propaganda” by critiquing his pogrom policy and calling his mustache “mustachios.” While chipping coal and laying bricks, the novelist gathered all the material for his later Nobel winning novels — The Gulag Archipelago, Cancer Ward, and One Day in the Life of Ivan Denisovich.

Stalin had seriously toyed with the idea of executing Solzhenitsyn’s Nobel predecessor, Boris Pasternak, during the Great Purge of ’38. Instead, he remaindered Boris’s poet friend, Titsian Tabidze, and spared the novelist, saying, “Do not touch this cloud dweller!” Two years later, the General Secretary had Trotsky ice-axed in Mexico after the publication of his Diaries in Exile and Revolution Betrayed. When, in 1958, Pasternak won the Nobel in Literature for “continuing the great Russian epic tradition,” he was told by the Soviet AWP that, if he went to Stockholm, he would not be allowed re-entry to the motherland. Calling such an exile “tantamount to death,’ the author of Dr. Zhivago declined the reward and, in a personal letter to Premiere Khrushchev, expressed his ardent hope that “I may still be of use” to Russian literature.